“Netflix was the one that was willing to take a chance.” 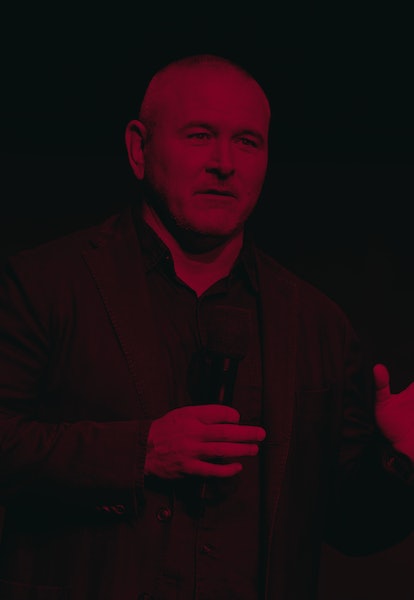 Tim Miller has always been a fan of short stories.

“My father read a lot, which is where I got my habit,” he tells Inverse in a recent interview.

Before the Deadpool director reimagined adult animation by co-creating the Netflix anthology series Love, Death & Robots with David Fincher (Season 2 is out now), he was in his father’s library.

It was there where he found a book called Chronopolis and Other Stories by J. G. Ballard. The short story book included “The Drowned Giant,” which tells the story of a dead human giant who washes up on the beach.

“I read it and I loved it. I even did an illustration for a fanzine in high school.”

“The Drowned Giant” is the standout episode from Love, Death & Robots Season 2, but the path to production wasn’t easy.

“Ballard is no longer with us, but his daughters are around. I asked them if I could do it Season 1, and they said no,” Miller says.

“I proceeded to send 50 emails begging them, and in one I said ‘Look, I’ve loved this story for years,’ and I sent them the illustration.”

That’s part of what convinced Ballard’s daughters to allow Miller to adapt the story for the screen, and he took great pains to make sure the celebrated science-fiction writer’s original vision carried over.

“If you read the short story, which I highly encourage, you’ll see it’s incredibly faithful both in tone and in the actual words,” Miller says. “I literally took the prose, converted it into a screenplay, and edited it down.”

The result is one of the most nuanced and haunting chapters of Love, Death & Robots so far. In “The Drowned Giant,” the washed-up carcass, curious locals climb all over the body and cover it with graffiti before it’s ultimately carved up into pieces, quickly becoming a local legend even as some evidence remains. In his episode, the last in Season 2, Miller abstains from flashy sci-fi ultra-violence for a somber meditation on humanity’s inability to respect and recognize the world around us.

Miller has been nominated for an Academy Award for Gopher Broke, a short animated film he co-wrote and executive produced. He also directed Terminator: Dark Fate and produced 2020’s live-action Sonic the Hedgehog.

In an interview with Inverse, he reveals the motivation for the series, what to expect in Season 3 (and beyond), and his predictions for Deadpool 3.

What was the motivation behind Love, Death & Robots as a series?

Well, David Fincher and I had tried to get a Heavy Metal film made for years and years. I mean, hundreds of meetings. The original movie came out in 1982 and it was very inspirational to a lot of animators who wanted to do adult animation.

So when I met David, we wanted to do something together and we said, “What about doing a new Heavy Metal film?” because he was an animation fan, but the world just wasn't ready for it at the time. But in the ten years that we did meetings and tried to get the project going, the world came around to see adult animation as viable, and Netflix was the one that was willing to take a chance. And so here we are.

Did the reception to Season 1 surprise you?

It would be arrogant if I said no. I knew that there were fans of this material, the thing that had held us back was the fact there were no comparisons for it, there were no other shows that had been successful that had a similar structure. That makes people nervous when it comes to spending the kind of money that we needed to do it well. But I knew that people were out there because I was one of them. So I wasn't surprised that they found the show.

Love, Death & Robots Season 2 feels like a shift in style from Season 1. How did the production process change between the two seasons?

Not much really. There's definitely a different perspective. We had different supervisors and directors helping me out on Season 1, but I picked all the stories for both of them. However, Jennifer Yuh Nelson came on board in Season 2, and she's got a strong voice and a clear vision. We had some interesting debates in stories that maybe I wouldn't have included or would have been in for a while and then moved out, she would fight for them. "Ice" is one of them, she was always a big fan of that.

Every time we rearranged the board for what stories were going to be in the actual show she would fight for that and others. That's the biggest thing. And then of course the nature of the show is that we work with different creators and different companies, so they bring a different flavor to it every time.

What benefits and drawbacks come with an anthology series?

There's a budgetary drawback in that you're reinventing the world every time and from a CG animation standpoint, you don't get the standardization of assets. If you model the character, you can use it for a whole season of television versus one show. I think the audience has gone with us, but you don't have the benefit of familiarity with characters from a story standpoint. So each time you're having to explain what everybody wants, what the stakes are, what the rules of the world are.

“On the benefit side, you can do anything.”

On the benefit side, you can do anything. Any story that I thought was interesting, we could do it and could mix and match genres and tones. Also, the audience doesn't know what was coming next — in a good way. Because TV is so often predictable, which can be both good and a bad thing, for me it helps to not get bored. If I do a Terminator movie, it's kind of all I think about for two years: Terminator morning, noon, and night. It's a bit of an intellectual desert, whereas this is like dessert every day.

You’re now executive producing Sonic the Hedgehog 2. How will the sequel differ from the first film?

I can't tell you that. Everybody knows that Tails is in it, and some other secrets have slipped, but if you're a hardcore Sonic fan there's more of the franchise to love. And in this one, the director Jeff Fowler is a pretty hardcore fanboy. And I think he's going to do it justice even more so than the first film.

“Everybody knows that Tails is in it.”

You practically invented a new genre of superhero movie with Deadpool. Do you think the character you helped create can exist in the MCU without being dramatically changed for the worse?

I do. I think Ryan Reynolds' take on the character and the way he embraces the particular kind of insanity — even if you said he's not gonna use four-letter words — would still be there. He still is that character. You can take the R-rated parts out of it if you wanted and it would still be Deadpool if Ryan was doing it.

“You can take the R-rated parts out of it if you wanted and it would still be Deadpool if Ryan was doing it.”

Love, Death & Robots has already been greenlit for a third season set for release next year. It’s already confirmed the famed Three Robots will make a return. Any chance of other follow-up shorts?

I can't tell you, but we definitely wanted to make sure that “Three Robots” came back, it was one of our favorites and one of the fan favorites. I'm sure you noticed that [“Three Robots” author] John Scalzi is my go-to guy. He is a genius and a super nice guy and very into the show. I hang out with him even when we don't have any show business to do. If he's in town, he comes to lunch. He even took me to the Nebula Awards and I got to nerd out with all the sci-fi authors.

How many episodes will there be in Love, Death & Robots Season 3?

I'll just say what has become volumes two and three, we planned as volume two. And then Netflix said, 'Hey, is there any way we can get this on the service sooner?' So this was the way we did it, by prioritizing a batch of them.

“What has become volumes two and three, we planned as volume two.”

I don't want to be criticized for anything, but I guess if the critics have to call us out on something, there not being enough is not a bad thing. To have people wanting more of the show? I'll take it.

Chronopolis and Other Stories
Amazon

Includes 16 original stories, including "The Drowned Giant," which was turned into an animated story for the Netflix series 'Love, Death & Robots.'