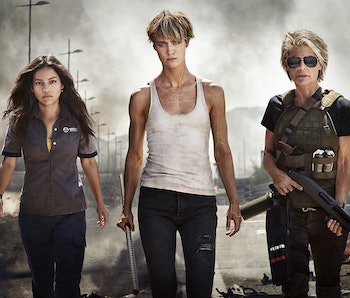 This article about the film Terminator: Dark Fate was originally published on May 23, 2019 and updated on May 15, 2021 following the movie's release. Read on for the original article, with some new changes to reflect the latest updates on this topic.

It’s been over 35 years since James Cameron introduced us to The Terminator in 1984. Now, with five films in the franchise and a worldwide fanbase ravenous for more, Cameron is back, along with Terminator alums Linda Hamilton and Arnold Schwarzenegger for a 2019 reboot (sequel?) titled Terminator: Dark Fate. The addition of actors Mackenzie Davis, Natalia Reyes, and Gabriel Luna, as well as a new director (Deadpool’s Tim Miller), meant the Terminator franchise would attempt to get a much-needed update while still holding onto the magic of the earlier films.

Here’s everything we know about Terminator: Dark Fate, including the cast, plot, trailer, and whether there will be any future sequels.

When did Terminator: Dark Fate release in theaters?

Is there a trailer For Terminator: Dark Fate?

The first teaser trailer for Terminator: Dark Fate was released on Thursday, May 23, 2019. An official trailer then dropped later that year in August (as seen below):

Your wish has come true! Arnold Schwarzenegger and Linda Hamilton will be returning for Dark Fate, reprising their legendary roles as the T-800 and Sarah Connor, respectively.

During a panel discussion for Dark Fate at CinemaCon in April, Hamilton opened up about why she chose to return to the world of Terminator after a nearly 30-year absence:

“It has been nearly 30 years since I last stepped into the shoes of Sarah Connor, a character who definitely changed my life and only a script, a story, a director like this could bring me back into this world — a perfect confluence of events. Once in a lifetime, or maybe twice, an event comes along that you cannot turn away from. And for me, this is that moment.”

Hamilton’s commitment to reviving the magic of the first two Terminator films was also mentioned during a CinemaCon red carpet interview with Variety. During that interview, she wondered aloud whether the Terminator films post-Terminator 2: Judgment Day were “forgettable” (shady!) before sharing how Dark Fate would course-correct the franchise:

“You start something and you’re invested in the franchise, but somehow the characters that you care about weren’t there. Too many people, too many story points. So I think we’ve done a good job of narrowing down the focus again so it will echo the first two films.”

Who were the newcomers to the Terminator world?

The trailer for Dark Fate also gives us a first look at three of the leads and newbies to the Terminator franchise: Mackenzie Davis as Grace; Natalia Reyes as Dani Ramos; and Gabriel Luna as a Terminator.

Davis was cast in Dark Fate all the way back in March 2018. She’s kept mostly mum about her character since being cast, only revealing this in an interview with ComicBook in April 2019: “I can say that I’m an enhanced human being and I come to Mexico City under a mysterious mission to protect Dani Ramos played by Natalia Reyes, and that’s about it.”

Reyes and Luna were among the second wave of cast members tapped to star in Terminator: Dark Fate. Reyes is mostly known for her work in Spanish-language film and television, although she has slowly been transitioning to English-language projects. Dark Fate will likely serve as a breakout role for the actress. Luna’s breakout role was in Agents of S.H.I.E.L.D. as Ghost Rider, a role he was set to play in a future Hulu series before its cancellation.

What is the plot of Terminator: Dark Fate?

“27 years after the events of Terminator 2: Judgment Day, a new, modified liquid metal Terminator (Gabriel Luna) is sent from the future by Skynet in order to terminate Dani Ramos (Natalia Reyes), a hybrid cyborg human (Mackenzie Davis), and her friends. Sarah Connor comes to their aid, as well as the original Terminator, for a fight for the future.”

Was James Cameron involved in Terminator: Dark Fate at all?

Any longtime Terminator fan will tell you that once James Cameron parted ways with the franchise after Judgment Day, the following Terminator films have been wildly hit-or-miss. There’s just something about a Cameron-Terminator pairing that makes sense, ya know?

Luckily, Cameron returned for Dark Fate as a producer for the 2019 film. He helped Miller develop the story, ostensibly consulting on the film as the mind behind the Terminator world. Dark Fate’s DNA has Cameron all over it, but Miller also brought his own sensibilities to the film.

Where in the Terminator timeline does Dark Fate fall?

The return of Hamilton and Schwarzenegger confirms what we’ve known for some time: In the Terminator timeline, Dark Fate happens after Terminator 2: Judgment Day. This means that any Terminator sequels or reboots happened between Judgment Day and Dark Fate — Terminator 3: Rise of the Machines, Terminator Salvation, and Terminator: Genisys — don’t exist in this universe.

Which Terminator Films should I watch before I see Dark Fate?

Because Dark Fate ignores everything that came after Judgment Day, you won’t have to study up too much before checking out the film. For now, rewatch 1984’s The Terminator and Judgment Day, and you’ll be all set. However, the other Terminator films are pretty fun rides (for better or for worse), so maybe you’ll want to make a marathon of it before you watch Dark Fate [Editor’s note: Maybe skip Genisys, though.]

How did Terminator: Dark Fate do at the box office?

Terminator: Dark Fate did not start well, officially deemed a “box office bomb” after its opening weekend. It eventually grossed $62.3 million in the United States and Canada, and $198.9 million in other territories, for a worldwide total of $261.1 million. It’s estimated that the film lost Paramount anywhere from $100 million to $130 million.

What did critics have to say about Terminator: Dark Fate?

Terminator: Dark Fate has a 70% rating on Rotten Tomatoes, a score of 54 on Metacritic, and a B+ on CinemaScore. Reviews thought this was the best Terminator film since Judgment Day, heaping praise onto Linda Hamilton’s return to the franchise.

Will there be a sequel to Terminator: Dark Fate?

While Dark Fate was being developed, James Cameron expressed interest in kicking off a brand new Terminator trilogy. However, the poor box office of the sixth film has sent any chances of a seventh into lava. The Hollywood Reporter wrote shortly after the movie’s release that the studio was not seeking out any future films. However, the Terminator franchise will live on in a future anime series on Netflix.