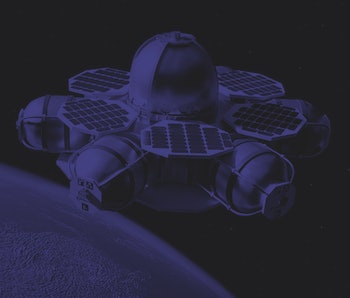 Earthly metaphors often fail to explain things in space. If you were building a gas station in Paramus, New Jersey, it wouldn’t make much sense to ship the gas pumps from Baltimore to San Francisco, and from SF to your Garden State filling station.

But that’s tantamount to how Orbit Fab will put the first satellite “gas station” into geostationary orbit sometime in 2022 or 2023.

This week, the American company announced that its satellite, called Tanker-002, will be hitching a ride on a SpaceX Falcon 9 rocket, before utilizing a curious trajectory around the dark side of the Moon to achieve a rarified orbit of more than 22,000 miles away.

Going around the back of the Moon is a nontraditional means of entering Geostationary orbit, which is defined by an altitude of 22,236 miles and matches the rotation of the Earth at just less than 2 miles per second. This results in the satellite remaining essentially motionless relative to a spot on the equator.

“Geostationary orbit is where most of our customers, especially the Department of Defense and intelligence community, are interested in,” Orbit Fab CEO Daniel Faber told SpaceNews this week.

But those spy satellites might run out of fuel and die, a quite an expensive failure. To resolve this problem, enter companies like Orbit Fab. Please excuse another use of a gas station metaphor:

After this gas station is put into Geo orbit, spacecraft called satellite servicing vehicles, made by companies like Northrop Grumman, will fill their tanks at it.

Next, these “tow trucks,” as Faber described them to SpaceNews, will travel to those spy satellites that are runnin’ on empty. They will refill them with hydrazine fuel, thereby extending their life. (Orbit Fab has not announced a contract with a company that makes the “tow tracks,” aka the satellite servicing vehicles. But to see how one works, this Northrop Grumman video is really helpful.)

Currently, there are some 560 satellites in GEO orbit, according to the Union of Concerned Scientists. (Not all of them are spy satellites of course.) To put that number into perspective, there are more than 4,000 total satellites in orbit with more than 3,300 in the far more common low Earth Orbit.

Orbit Fab placed the first-ever satellite refueling station into low Earth orbit in June, and aims to extend the operating life and functions of satellites in a variety of orbits, increasing the number and types of jobs and activities possible in space.

When will Tanker-002— launch?— The SpaceX Falcon 9 launching OrbitFab’s Tanker-002 won’t blast off until late 2022, or early 2023. (Also aboard that Falcon 9 is lunar landing vehicle built by Intuitive Machines to deliver NASA instruments to the Moon’s surface.)

Once in orbit, Tanker-002 will be ready to dispense 200 pounds hydrazine fuel. Orbit Fab says the depot can store propellant for up to 15 years. (The low Earth orbit depot that went into orbit in June only carries 100 pounds.)

Orbit Fab designed its fuel transfer interface with the idea of refueling defense and intelligence satellites, but the company hopes to move beyond government clients to catalyze a new level of commercial space activity.

“Orbit Fab believes a bustling in-space economy is a precondition to permanent jobs in space,” the company announced in a statement.

Orbit Fab, by providing a way to refuel in orbit, “helps open new industries like space tourism, manufacturing, and mining.”

More like this
Science
6.27.2022 12:00 AM
NASA lit 1,500 fires on the International Space Station — and discovered something new
By LAURENCE TOGNETTI and Universe Today
Science
6.27.2022 8:45 PM
NASA found the crash site of the rocket booster that hit the Moon in March
By Kiona Smith
Science
14 hours ago
NASA just built the best map of Mars to date using 51,000 images
By Evan Gough and Universe Today
Related Tags
Share: