Ted Lasso's focus on therapy is its greatest gift 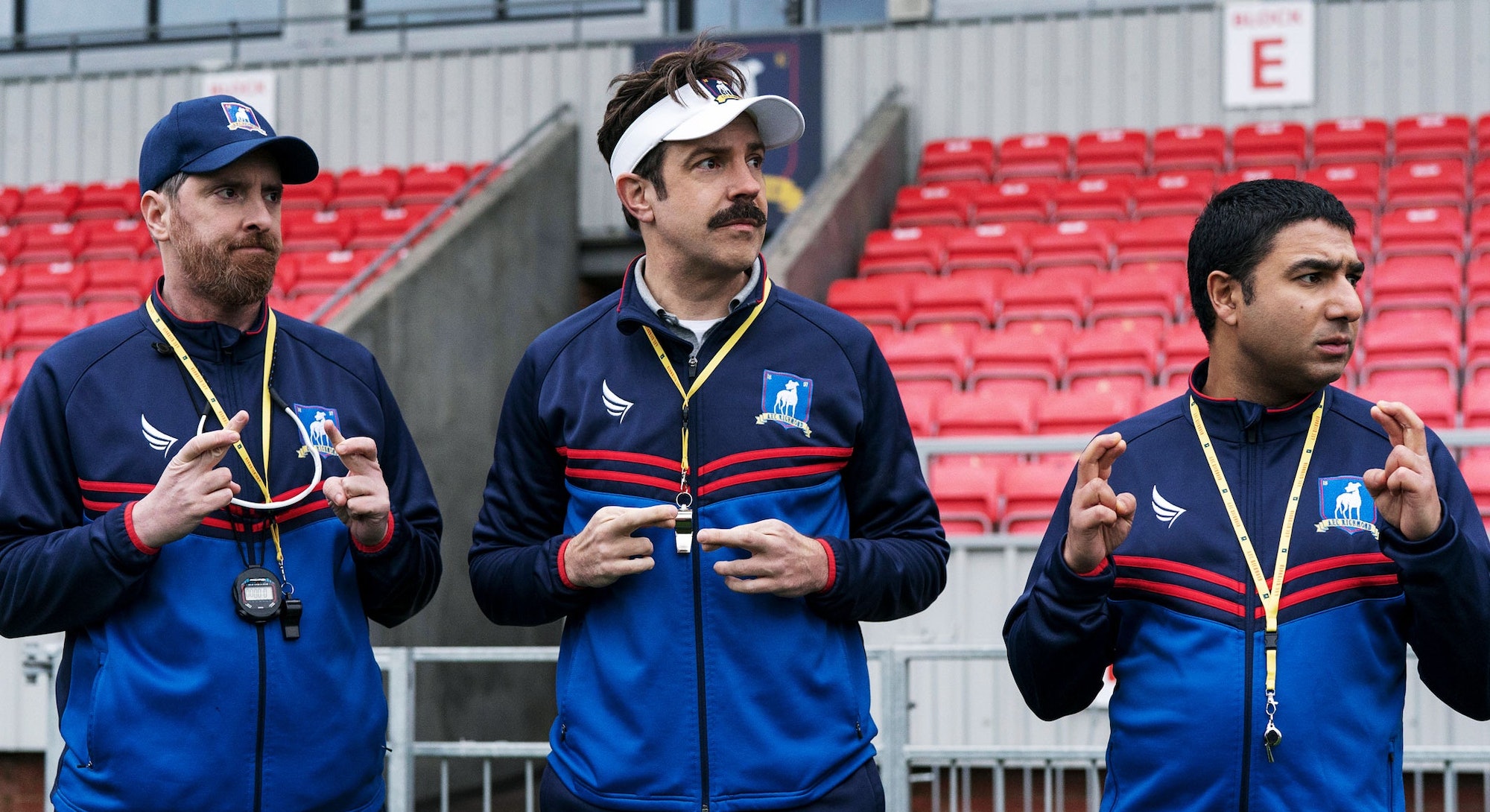 In the first episode of Ted Lasso Season 2, the relentlessly cheerful protagonist tells a reporter (Trent Crimm, The Independent), “There are two buttons I never like to push: panic and snooze.”

Over the next 10 episodes, it becomes clear that panic is something Lasso has been trying to keep at bay. We saw him have a panic attack in Season 1 — seemingly the result of his then-wife sending him divorce papers — but by the end of Episode 11, we’ve gotten a much fuller picture of Lasso’s struggles.

In one particularly heartbreaking scene, he tells Dr. Sharon Fieldstone that his father died by suicide when he was 16 years old. In Episode 10, we see that trauma come to a head with a panic attack before Rebecca’s father’s funeral.

Well before the big reveal, however, we learn that Lasso has a deep disdain for therapy — albeit in the most Ted Lasso-y way. Why go to therapy and pay a stranger to listen to you when you could just get advice from a friend who actually knows you? As always, Lasso believes interpersonal connection is, if not a cure-all, the foundation upon which one can achieve their highest potential.

But Ted doesn’t open up to Rebecca, or any of his other friends. When, in Episode 7, he has a panic attack during a game, he makes a beeline for Dr. Sharon’s office. In Episode 8, Dr. Sharon is the one he goes to with the information about his father — a tacit endorsement of getting professional help.

Mental health representation on TV isn’t always great. There are ridiculously quick fixes, sensationalized symptoms, and a general focus on drama (or comedy) over realism. While Dani Rojas was able to overcome the yips with one session, Ted is poised to be a much more complex —and realistic — case.

As Ted Lasso Season 2 nears its finale, two mental health professionals share their thoughts on the show’s portrayal of mental health struggles, treatment, and why it matters that one of the biggest shows of 2021 isn’t afraid to tackle those issues head-on.

“I think [Ted Lasso] is doing a good job of giving you the perspective of someone who doesn’t want to be in therapy,” Jessi Gold, a psychiatrist and Assistant Professor in the Department of Psychiatry at Washington University’s School of Medicine in St. Louis, tells Inverse.

By making Lasso someone who is skeptical of therapy, the show is able to answer questions many people might have about therapy.

“The way they’re doing it feels very organic. They really pull you along and tell you, ‘Ok, this is what therapy is, these are the questions you might have about therapy,’ and then they’re answering them for you,” Gold says. “They’re also showing you that therapy works.”

“You get paid to coach, does that mean you don’t care about your athletes?’”

Jeff Brown, a sports psychologist, assistant professor at Harvard Medical School, and author of The Winner’s Brain, tells Inverse that Lasso’s initial belief that psychologists are just in it for the money (“the session is 50 minutes and you charge by the hour”) and don’t actually care about patients is something he’s heard in his own life.

“Those are common things that therapists hear quite a bit of, but I thought her response was pretty good,” Brown says. “Like, ‘Well, you get paid to coach, does that mean you don’t care about your athletes?’”

To his credit, Lasso concedes the point and proceeds with the therapy session.

Why Ted Lasso is always so upbeat

Over the past four episodes, we’ve gotten to see how Lasso’s relentlessly upbeat, frenetic energy isn’t the mark of a carefree man, but instead, a coping skill Lasso may have developed while not addressing his past trauma.

Lasso is the coach: he’s in a prominent leadership position, a consummate jokester, and more often than not, seems to be as happy as the goldfish he always directs his team to be.

But while goldfish may have 10-second memories, Lasso is a prime example of how humans are more complex. Whether or not you want to deal with trauma, Gold says, it’s going to come up.

“When you're really struggling, sometimes the way to get up in the morning and interact with the world is by putting on a show or being a stage version of yourself. Because then people will say, ‘oh you’re funny, you’re entertaining, you’re fun to be around, and so you feel like there’s nothing wrong with that version of yourself,” she explains.

It makes sense that Lasso’s trauma would manifest in panic attacks, Gold says. The body remembers trauma, and when that trauma isn’t addressed, it’s common for it to show up physically.

“To me, it looks like his panic attacks start with tingling in his hands, which is very common,” she says. “They show panic really well onscreen because it really does substantially affect you to the point where you can’t sit there and keep coaching.”

Those details make the show feel precise and accurate to people who would know best.

“I think it’s a really good representation of the way we adapt to survive trauma in our lives,” Gold says.

Another detail that was on the nose for the therapists is something people outside the mental health field may have missed. In Episode 8, we see Dr. Sharon talking to a mentor or therapist (it’s unclear which) about Lasso.

It’s very common for mental health professionals to have both a therapist of their own and/or a mentor with whom they discuss their own life and practice.

“It was important that they showed that the work takes a toll on us and that we bring it home,” Gold says.

“It's okay to self-disclose to your clients.”

Brown agrees. It also speaks to her professional responsibility.

“It’s commonplace for psychologists to have trusted colleagues you can run things by, or talk about your own emotional responses,” Brown says. “I thought it was important that they demonstrated that she was responsible to the process and the care of Ted.”

Dr. Sharon’s therapist or mentor/colleague told her, “He may not open up until you open up a little bit.”

“It's okay to self-disclose to your clients as long as you have superb clinical judgment about how to do that,” he explains.

The one criticism the mental health professionals Inverse spoke with had about Ted Lasso’s representation of mental health is the same one they both agreed was necessary for character development.

Dr. Sharon is riding her bike — her “happy place,” she later tells Lasso — when she’s hit by a car. She has a mild concussion and Ted is the person who comes to bring her home from the hospital. Later, when Lasso calls to check in, she discloses her anxiety that she’ll be too scared to ride again.

While it’s true that therapists have their own lives and issues, the blurring of the friend/patient line was a little much for these therapists.

Selectively disclosing is one thing, Brown argues, calling a patient to pick you up from the hospital and bring you home is another.

Gold says that scene was actually a little hard to watch. “I felt sort of invaded, or I thought she would feel invaded.”

Brown agrees, though he understands why it was necessary for the show. It harkens back to one strange thing he noticed at the beginning of the season.

“She comes off a bit condescending or aloof initially. That typically wouldn’t be a great way to develop rapport with the team,” Brown says. “But I think they had to do that as far as the character development. She does soften up.”

“I felt sort of invaded.”

Ted bringing her home from the hospital serves as a way to indicate that the relationship has significantly changed. She’s gone from refusing to share her favorite book with Ted (and Ted refusing to respect her profession) to calling him when she’s most vulnerable.

Those blurred boundaries were reestablished in the funeral episode Gold says. Dr. Sharon goes to Lasso’s house because he’s in the midst of a panic attack. After he’s more stable, Lasso asks, “Are you charging me for this?” and the doctor replies, yes, she is.

“I think that's actually really important, not just as a joke but as a way of holding a boundary. She is not free, what she’s doing for him is actually her job,” Gold says. “It’s not a friendship, even if therapy feels like that sometimes. She’s trying as best she can to keep those boundaries.”

But it wouldn’t be Ted Lasso if the title character didn’t wriggle his way past another professional boundary before saying goodbye. Warning! Spoilers ahead for the most recent episode of Ted Lasso.

At the top of Friday’s episode, we learn that tomorrow is Dr. Sharon’s last day. In a quintessential Lassoian move, Ted attempts to teach the team the choreography to NSync’s “Bye Bye Bye,” to unveil at the surprise party he’s planning for the psychologist that evening.

Only Dr. Sharon is already gone. Higgens explains that “an emergency came up” and Dr. Sharon had to leave today. Instead of saying goodbye in person, the psychologist has written everyone personal letters which, unsurprisingly, leaves Lasso furious. He marches over to her house and waits outside the gate until she returns.

“I thought we had a breakthrough.”

Lasso tells the doctor he can’t believe she would leave without saying goodbye, and that she, of all people, should understand his abandonment issues. Sharon reassures him that she knows, it’s all in the letter. She’s just not good at goodbyes.

Ted doesn’t want to read the letter. Instead, they have an exchange that cuts to the heart of their blurred boundaries relationship.

“I thought we had a breakthrough,” he says angrily.

“We did,” she assures him. “You showed me that expressing my vulnerabilities can help patients with theirs. You helped me become a better therapist.”

This comment softens Lasso enough that he agrees to read the letter. Perhaps the issue was less about saying goodbye in person than knowing that the lasting impact she had on him was reciprocal.

We don’t know what’s in the letter, just that it’s enough; the rage on his face melts slowly until he’s holding back tears.

They go have a drink. There’s a Good Will Hunting reference. Then, she’s gone.

Perhaps that would have been the end of the mental health portion of the show. The team does, after all, have that one more game they need to win to move back into the Premier League after relegation.

Instead, reporter Trent Crimm sends Lasso a text, letting him know a story will be in the print edition of the paper the next day. The headline reads, “Coach Lasso Suffered Panic Attack During FA Cup match.”

Other than Dr. Sharon, the only people who knew about the attack are the other coaches.

As a reporter, Crimm says, he has to print the story. As someone who respects Lasso, Crimm wants Ted to know it was Nate who divulged the secret.

For Lasso, who values interpersonal connection above all else, the betrayal will likely be worse than whatever the British press might do to him.

It seems likely this is why the writers had Dr. Sharon’s character, played so brilliantly by Sarah Niles, leave an episode before the finale. It will be the first real test Lasso’s faced without Dr. Sharon to help him through this Season. We can only hope that what he’s learned in therapy will stick.