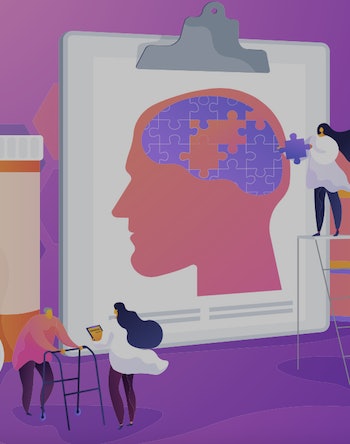 With no cure available, the progression of dementia can feel inevitable. As memory and personality fade into a complicated jumble of proteins, brain cells, and genes, is there any way to regain control? A growing body of research suggests it’s possible.

The results of two separate studies released this week suggest that low-tech solutions like exercise, a good night’s sleep, and a “cognitively active” lifestyle could be far more important than we realized in resisting dementia.

Kaitlin Casaletto, the first author of a study published in the journal Alzheimer’s and Dementia tells Inverse that active cognitive and physical lifestyles were linked to a 55 percent slower rate of cognitive decline in 105 patients who carried a gene linked to frontotemporal lobar degeneration (FTLD), which is a type of dementia.

Now, Casaletto recommends those approaches to almost every patient she sees at UC San Francisco’s Memory and Aging Center.

“These are the best current tools we have to prevent cognitive decline,” Casaletto tells Inverse.

Genes underlie 40 percent of FTLD cases, which means that 60 percent of cases are not genetic. Regardless of the disease’s origin, the new research points to ways to fight back against outcomes that may feel insurmountable.

Exercise and the healthy brain

Casaletto’s research shows that one measurable increase in physical activity was associated with a 62 percent less cognitive decline. In this case, cognitive decline refers to the loss of thinking skills indicative of dementia. That result builds on a growing pile of research linking both rigorous and light activity to a more resilient brain.

For example: One 2019 JAMA study found that walking 7,500 steps per day was associated with slower declines in brain volume — a marker typically associated with dementia. That slowing of brain matter decline was the equivalent of 2.2 fewer years of aging in the brain.

Exercise early in life, when dementia seems years away, may also be beneficial. In February 2019, scientists found that people aged 20 to 67 who performed light aerobic exercise saw improvements in cortical thickness and executive function — that’s a type of higher-level thinking (think planning ahead or logical reasoning). Exercise improved executive function for people in their twenties but was related to even bigger improvements in people in their thirties and forties

“Since executive function decreases with age, this makes us think that exercising reverses the decline in cognition, as opposed to enhancing cognition,” Yaakov Stern, a Columbia University neurologist and the first author of that February 2019 told Inverse previously.

"Essentially the data seem to indicate that any movement counts."

Casaletto’s work released Tuesday didn’t find significant changes in brain volume — something that past research pointing to the power of exercise found. Rather, she found that the physically and mentally active participants “outperformed their brain volume,” in turn defying the scientist’s expectations.

“The data on cognitive aging supports everything from just walking more to rigorous aerobic exercise (both of which are associated with better cognitive outcomes with age),” Casaletto explains.

“Essentially the data seem to indicate that any movement counts.”

The power of a puzzle

Exercising the body isn’t the only way to keep the brain sharp in the face of neurodegenerative disease. In this new study, one measurable increase in cognitive activity was related to 55.2 percent less cognitive decline.

The study argues that this protection can be attributed to a “cognitively active lifestyle.” There are plenty of ways to design a lifestyle that goes far beyond crosswords and number puzzles. Still, crosswords appear to be powerful tools: one study suggested that seniors who use crossword puzzles had the short term memory capacity of people eight years younger than themselves.

If crosswords aren’t tempting, there’s also evidence that having cultural experiences can also contribute to brain health. Analysis of data from the English Longitudinal Study of Aging found that people who attended museums “every few months” had 49 percent lower risks of dementia compared to people who never attended.

The theme that underpins all these activities is novelty. As long as the activity is new to you, it “may be particularly helpful in building new connections in the brain and support brain health,” says Casaletto.

While exercise and new experiences may help protect the brain during waking, another study published Tuesday in the journal Neurology shows that the unconscious hours may be just as important, even for people in their early twenties.

A small exploratory study on 15 men, all 22 years-old, in Sweden, found that reducing just one-night total sleep deprivation increased the level of tau protein in the blood by 17.2 percent. Tau is a protein linked to Alzheimer’s in the brain when it’s functioning abnormally. On a night of normal sleep, tau increased by 1.8 percent.

Jonathan Cedernaes is a neuroscientist at the Uppsala University in Sweden and the study’s senior author. He tells Inverse that this isn’t a large enough increase to be immediately concerning. Rather, it points to the idea that the brain has a “rhythm” that sets healthy levels of tau release, and that this system can be tinkered with in young healthy people.

Cedernaes explains that later in the evening we may have naturally high tau release. During sleep, the brain may “clear out” the tau that’s formed during that period. We already know that the brain does have a type of “rinse cycle” during sleep, during which cerebrospinal fluid washes through the brain, clearing it of harmful proteins.

"The most important message may be more and more evidence indicates that sleep is a factor to consider in the context of lifestyle factors that influence the risk of Alzheimer’s disease."

“If we instead stay awake when we should normally sleep, this may result in competing processes, as we have sustained release of tau when it should normally not be released any longer,” Cedernaes says. “This could result in altered clearance of tau from the brain, and this may then spill over into the circulation, which is what we measured here.”

These results are just the beginning, and we don’t know how results like Cedernaes’ will play out in the long-term. For now, they point to the idea that sleep may be a major part of keeping the brain resilient against the biomarkers of Alzheimer’s.

“The most important message may be more and more evidence indicates that sleep is a factor to consider in the context of lifestyle factors that influence the risk of Alzheimer’s disease,” he says.

These old-school techniques may not feel particularly futuristic, but we shouldn’t let their low-tech nature obscure their effectiveness. They may not be the futuristic cure-all, but they can prolong lucidity to experience moments that could otherwise be lost.

“There may be no ‘predestined trajectory’ when it comes to brain health, and hopefully these data empower them to make healthy lifestyle choices that could help support their brain health longevity every day,” says Casaletto.