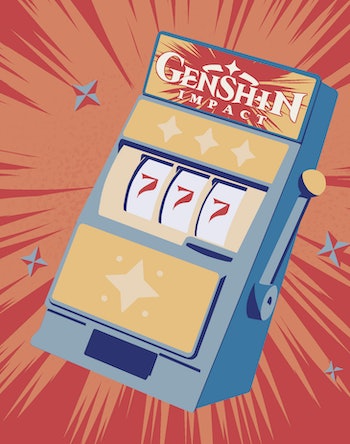 On September 28, role-playing game Genshin Impact began its meteoric rise to the top of the free-to-play game food chain.

Chinese developer miHoYo cast a wide net and launched on PC, PlayStation 4, and mobile platforms right off the bat, attracting about 21.3 million pre-registered players before the game was even released, according to the South China Morning Post.

Genshin Impact was crowned the most successful international launch of a Chinese game ever and its instant popularity grossed miHoYo more than $1.84 million on the iOS App Store. But how did a free-to-play game make a small fortune two days after its release? One word: Gacha.

Unlike competing online RPGs — like Blizzard’s World of Warcraft — players don’t create their own characters in Genshin Impact. Instead, there are two dozen pre-made protagonists you can unlock using an in-game currency. Items used to power-up those characters also need to be rolled out of Genshin Impact’s virtual slot machines. In other words, miHoYo uses the wallet-draining schemes of every spammy mobile game but packages them in a premium experience that gamers have found irresistible.

Pocket Gamer reviewer Dave Aubrey put it best. Genshin Impact is a “AAA gacha game” that “almost feels like stealing” because of its enormous open-world design and buttery smooth hack-and-slash combat. It’s this feeling that’s led players, including Washington Post reporter Gene Park, to spend more than $100 before they even realize what they’ve done.

Genshin Impact is the cutting edge of a new spin on the subgenre: gacha games that don’t bombard players with ads and pop-ups to spend more money. Instead, it simply bakes the Japanese vending machine system into a well-made RPG. This evolution of gacha has drawn hundreds of thousands of players to forums like Reddit to brag about the powerful characters they rolled and commiserate over their gacha misfortunes.

While Genshin Impact might be gamers’ latest gambling obsession, miHoYo has simply refined a vending machine craze that has mesmerized people for decades.

Coin-operated vending machines that sold candy and collectables have been around since the 1880s in England and the United States. These automated vendors already sold an assortment of gumballs and toys like plastic soldiers. Buyers could insert a coin and receive a random flavor of gum or any number of G.I. figurines, so vending machines have always been a game of chance.

The popularity of vending machines would continue until the 1960s, but these Gacha predators would dispense loose products, which Japanese entrepreneur Ryuzo Shigeta reportedly found gross and frustrating. So he decided to improve them in one crucial way, include packaging.

He invented his own style of vending machines in 1965 that packaged all of their prizes inside spherical, plastic containers and called them Gachapon. The name was inspired by the two sounds made by Shigeta’s machines, the “gasha or gacha” made by their hand cranks make the “pon” when capsules drop out of them.

Gachapon machines gained cult-like popularity over the next ten years by selling novelty plastic toys. Other toy companies capitalized on the trend in the 1970s like Bandai Co. (now Bandai Namco), but it was Tomy that branded their vending machines as simply “Gacha.”

By then, gacha vending machines were the obsessions of children and collectors around the world and it would only be a couple more decades until video game companies took advantage of the gacha craze.

Gacha’s jump to video games was more of a slow burn than an instant transmission. Full-blown microtransactions and the loathed lootboxes in Electronic Arts sports games didn’t take root until the mid-to-late 2000s. But asking for real money, developers simply created gacha systems with in-game currencies that could only be earned by playing.

Monster Rancher, developed by Temco for the original PlayStation in 1997, was the earliest example of video game gacha system Inverse could find. Much like Pokémon, players chose from a set of starting monsters they could train to become stronger. But if they wanted to collect and breed their own group of beasts they’d need to earn in-game money to spend in a fictional market where a random assortment of monsters would appear every time gamers checked in.

Single player games like The Legend of Zelda: Oracle of Ages (2001) followed in Monster Rancher’s footsteps. Nintendo added Gasha Trees that would spawn random prizes for players, like Rupees or Potions. That same year Nintendo also released Super Smash Bros. Melee, which included its own gacha-style lottery where players tried to collect the game’s entire set of virtual statues.

Online social networking game Habbo Hotel (2001) pioneered the in-game currency business model, where players would spend real-life money to buy virtual tokens they could spend on cosmetics and skins. But it was free-to-play online RPG MapleStory (2003) that would use Habbo Hotel’s business plan but have gamers gamble with their virtual currency with the 2006 introduction of Gachapon.

The idea was simple, players would pay a minimum of 1,000 NX (or roughly $1 at the time) to buy a ticket that would get them a random item. More expensive tickets would give gamers the odds of landing more precious jackpots and developer Nexon would host events with themed tickets and prizes.

These concepts were the precursors to full-fledged, mobile gacha games, like Konami’s trailblazing Dragon Collection (2010), which effectively created the genre. These utilize existing board game and card game concepts, but they’re centered around constantly playing to upgrade your deck or items. If you don’t want to play for hours on end, you can simply pay a fee to get some good cards.

From here onward the floodgates opened and developers cranked out an endless stream of mobile-only games, like Puzzle & Dragons, Summoners War, and Fate: Grand Order. Many of these games have become turn-based team-battlers where players control a team of characters from popular franchises.

Titles like Star Wars: Galaxy of Heroes and Marvel Strike Force have introduced even more gamers to the gacha genre by letting them assemble teams of their favorite comic book and movie characters. But Genshin Impact has taken the genre to new heights by offering a highly polished open-world game that will hook players before constantly tempting them to spend a little more money for another chance to pull the game’s digital crank and see what comes out.