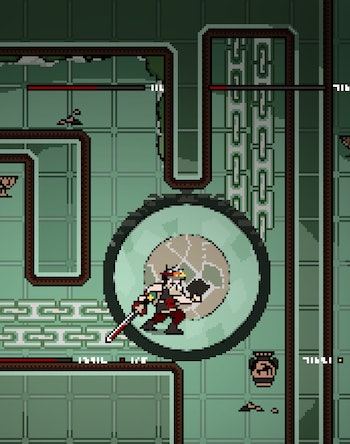 The new game puts players in control of the brooding son of Hades — Zagreus — who will stop at nothing to escape the dull halls of the Underworld and live lavishly on Mount Olympus. The only thing standing in the way of Zag’s dream is a horde of mythological beasts and demons that will kill him and send the son of Hades tumbling back down into hell over and over again.

There is no saving or reloading. Each time Zagreus is bested in combat he has to wipe the blood from his tunic and start from square one all over again. And each time, the crypts leading out of the Underworld and the monsters that inhabit them are completely different.

Permanent death and randomly generated levels are two of the major defining characteristics of the video game genre known as roguelikes, and many gamers absolutely hate them. But Hades has redeemed the genre in the eyes of its haters with a creative narrative, a diverse cast of characters, and unique mechanics that don’t make dying and starting from scratch as much of a drag.

Many of the best aspects of Hades have made gamers ask, is it even a roguelike to begin with? This has revived the decades-long arguments about what gameplay elements define the genre, and it can only be answered by looking back at the game that started it all.

The origin of Roguelikes

Rogue is a dungeon crawling game created by programmers Glenn Wichman and Michael Toy in 1980 while they attended the University of California Santa Cruz. The title gave players control of a knight (represented by an ‘@’) that had to explore randomly generated chambers in a maze-like dungeon as they searched for the Amulet of Yendor.

Unlike Hades, Rogue was turn-based, giving players as much time as they needed to plot their next move, and for good reason. Every time you die in Hades, Zagreus gets a little bit stronger, making it easier to get farther in the next run. But in Rogue, once you die you lose all of your past progress and start over with nothing. Wichman and Toy chose this unforgiving mechanic as a way to make the game more interesting for them specifically.

They were both avid Dungeons & Dragons players who had been fascinated by the text-based adventures that gained traction on early computer systems in the mid-1970s. Titles like dnd (1975) and Colossal Cave Adventure (1976) drew inspiration from the role-playing tabletop game, and Wichman had a dream to create his own virtual adventure to rival his favorite games.

One day while writing code for his project in the UCSC computer labs, he ran into Toy who immediately took interest in Wichman’s vision. Fate would have it that both of their skill sets were near complements to each other. Wichman had an in-depth knowledge of game design, while Toy had more coding experience.

Once they began collaborating, it was Toy who realized that if they were to design their own text-based adventure, they would know every twist and surprise the game would have to offer. It wouldn’t be fun for them because they would effectively spoil the story while they were making it. So, Toy thought, what if they made a game that was different every time someone started it?

“The ideal would be to write a computer game that was fun for me to play, and that was the problem with these adventure games that I loved so much,” Toy said in a 2016 interview.

A walkthrough of the original 'Rogue.'

Wichman was sold, and, using a programming language named Curses, they began piecing together their idea. It was Wichman who later came up with the name before the game’s release and inadvertently kickstarted an entire genre.

“I liked the idea of a rogue,” he said. “We were coming from a Dungeons & Dragons background, but we were creating a single-player game. You weren’t going down into the dungeon with a party. The idea was that this is a person going off on his or her own. It captured the theme very succinctly.”

The rise of roguelikes

Wichman and Toy’s brainchild would go on to inspire decades of games that would tweak the duo’s original formula for Rogue.

Hack (1982) was an immediate successor that added the concept of a shop where players could purchase items and spells with the gold amassed through their randomly-generated adventure. The title was developed by Jay Fenlason and served as the groundwork for the more advanced NetHack (1987), which added more advanced monster behavior and the concept of randomly acquired “blessings and curses” to assist or doom a player’s run

From then onward the floodgates opened and game developers cranked out a steady stream of games that were clearly like Rogue but added their own flavor to keep things interesting. Moria (1983) featured boss battles and not just random encounters, plus it would randomly generate a new level even if players walked backward into a room they had just come from.

A genre was quickly developing, but with each new release, many gamers felt the genre was being watered down. Titles like Chunsoft’s Mystery Dungeon (1993) reduced the tedium of early roguelikes by adding progressively more difficult levels and let players select if they wanted to play with permadeath in the difficulty settings.

Other titles like Ancient Domains of Mystery (1994) followed in Chunsoft's footsteps and even added crafting mechanics for players to create and improve their equipment. Roguelikes were undergoing a transformation and moving past the game design doctrine's that Wichman and Toy laid out so long ago.

All of these new additions to the genre led a group of developers, players, and industry leaders at the 2008 International Roguelike Development Conference in Berlin to create a scoring system to determine how “roguelike” any given game is. This interpretation of the genre became known as the Berlin Interpretation, which laid out eight “high-value factors” when it comes to classifying a game as a roguelike:

These guidelines showed that many titles, like Mystery Dungeon, were actually roguelike hybrids instead of full-fledged copies of Wichman and Toy's creation, which led to the birth of the subgenre "rogue-lite."

This category of games still utilizes some of a roguelike's pillar design choices, like permadeath and randomly generated levels, but plays fast and loose with other aspects of Rogue. The late 2000s and early 2010s were rife with titles that wholeheartedly embraced this divergence from roguelikes.

Spelunky (2008) by Mossmouth merged the roguelike concepts with 2D platforming mechanics. The title included four increasingly difficult areas where players had to dodge underground beasts — like you would in a Super Mario Bros. game — while collecting bricks of gold and saving civilians.

FTL: Faster Than Light (2011) by Subset Games was a complete departure from the medieval, high fantasy aesthetic of most rogue-likes. Players were put in charge of a spaceship being chased by an alien horde, the only escape is to move through the sections of a randomly generated galaxy that each housed unique challenges.

Much like those two concepts, the Berlin Interpretation would technically rule out Hades as a "true roguelike" since Supergiant's title is in real-time and not turn-based and Zagreus gets stronger every time he attempts to escape the underworld. But that might actually be a positive thing.

The Berlin Interpretation is meant to be used to determine how closely a game resembles Wichman and Toy’s original creation. While some nostalgia-seeking gamers will want to relive Rogue's glory days, rogue-lites are natural evolutions and refinements to game concepts established decades ago.

That being said, nit-picky gamers will always argue over how to classify the latest dungeon crawler. But whether or not you call Hades a roguelike or rogue-lite, it’s clear that the genre still has room to grow even after 40 years after its inception in a California computer lab.