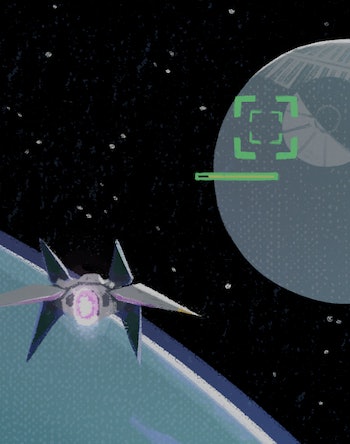 On October 2, Star Wars: Squadrons continued Electronic Arts’ unexpected hot streak of stellar Star Wars titles by taking to the skies. The new title skips the lightsabers and puts gamers into the cockpits of the franchise’s most iconic spaceships.

Dogfighting games have come a long since their inception with the 1970 arcade shooter Jet Rocket, and Squadrons is a testament to how lifelike and difficult flight combat games have become. The game’s controls can be hard to learn for newcomers, and even veterans found it exceedingly difficult to pull off one of the genre’s most basic evasive maneuvers, a barrel roll.

The 360-degree horizontal spin is a flashy way to dodge blaster fire — or simply show off in games like Microsoft Flight Simulator 2020 where it’s never truly necessary to spin mid-air. Barrel rolls have become inseparable from flight games and inspired a meme used to describe any sort of object or animal in mid-rotation.

Many of these images feature an angry rabbit demanding that the meme’s subject “DO A BARREL ROLL,” a reference to a popular ‘90s dogfighting game that redefined “barrel roll” for a generation of gamers: Star Fox.

Before video games, the term was exclusively used to refer to military or stunt planes spinning in the sky. The first known use of barrel roll was recorded in 1917 during World War I, according to the Merriam-Webster Dictionary. The first plane flight had only happened 14 years ago, but WWI forced air combat out of its infancy and into a core part of nearly every nation’s military, which is where U.S. pilotes first coined the term formally known as an “aileron roll.”

But for gamers, the history of in-game barrel rolls begins almost a century later with the 1993 release of Star Fox on the Super Nintendo Entertainment System.

The gaming origins of barrel roll

Nintendo introduced the barrel roll to gamers as an easy-to-pull-off maneuver you could activate by double tapping the left and right bumpers on the SNES’s controller. The game’s simulated 3D graphics and anthropomorphic animal space pilots made it a global success that went on to sell 4 million copies by 1998, but a year before that, the 1997 release of Star Fox 64 would revolutionize flight combat games and turn barrel roll into an undying video game meme.

The sequel refined everything Star Fox set out to do in 1993. It garnered glowing reviews from nearly every prominent video game publication at the time, sold 300,000 copies a week after launch, and appears on many “Best Games of All-Time” lists. However, all of that pales in comparison to the influence of one Star Fox 64 mission when retired starship pilot and anthropomorphic rabbit Peppy Hare belted the famous words as players approached four enemy laser turrets.

A mix of the Star Fox 64’s critical reception, Peppy’s goofy face, and the aggressiveness of the demand turned “Do a barrel roll” into the most well-known quote from the game. And that was just the beginning.

Do a barrel roll beyond Star Fox

By the early 2000s, the phrase was an inside joke that anyone who owned a Nintendo 64 or had friends that did was in on. The proliferation of household computers and the internet got even more people on board, especially after the phrase’s first definition was published on Urban Dictionary early in 2004.

From there, “Do a barrel roll” transcended Star Fox and became a joke meant to confuse people who didn’t know its origins. The most notorious use of the meme happened in June 2006 during a live call-in talk show put on by comedian Tom Green.

Tom Green Live! was a broadcast Green would host on his website and a precursor to the “Just Chatting” Twitch live streams that are popular today. The idea was to get random people to call in so they could riff with Green like some kind of unfiltered, shared comedy show. Instead, Green’s phone lines were spammed into oblivion.

Despite this technical difficulty, Tom Green Live! did result in a now legendary clip of someone going on air and repeatedly asking Green to “please do a barrel roll.”

This etched the joke into the annals of internet history and led to the creation of countless memes loosely based on Star Fox, while others took text straight from the N64 game. However, it wouldn’t be until 2011 when the Nintendo inside-joke would hit the mainstream.

On November 3, 2011, Google added an easter egg to its search engine that makes the users’ browser window rotate in a circle when they googled the phrase “do a barrel roll.” Video game news site Kotaku, as well as mainstream media outlets like The Huffington Post and TechCrunch, reported on the hidden feature and explained the joke to anyone who never got the chance to play Star Fox 64.

Today, the phrase has waned in popularity as a relic of early internet history. But if you ever find yourself in a tight spot in Star War: Squadrons, remember Peppy’s legacy and do a barrel roll to avoid being blasted to smithereens.