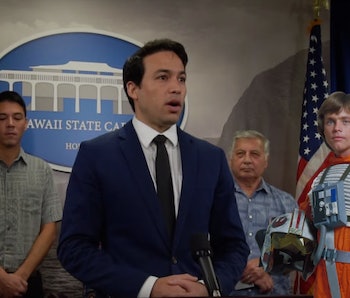 When a Hawaii politician echoes the famous words of the Admiral Ackbar — “It’s a trap!” — in a press briefing, you know things are serious. In this case, Hawaii State Representative Chris Lee (D) took to the podium and vowed to protect his people from the evils of Star Wars: Battlefront II and its microtransactions. As always, these kinds of rebellions are built on hope.

Since before its release last Friday, Battlefront II and its developer EA came under fire for what many called the game’s a “pay to win” model. To unlock some of the best characters and abilities, players either needed to spend dozens of hours or hundreds of dollars just for a chance at unlocking Luke Skywalker or Darth Vader. It essentially incentivized players to dump lots of money into the game on top of the $60 or more price tag just to get the Force-wielders they wanted.

First, EA reduced the cost of characters, and then they temporarily removed in-game purchases altogether to save face. But that’s just not enough for Hawaii, because these Reps, like many others, worry that it speaks to an emerging and far more problematic issue in gaming.

Rep. Lee and others addressed the issue in a video accidentally released to the public Tuesday that is literally called “Highlights of the EA predatory behavior announcement”:

The legislators speak at great length about the “spread of predatory practices in online gaming” and the “significant financial consequences” it can have on families. Rep. Lee himself calls Battlefront II a “Star Wars-themed online casino designed to lure kids into spending money,” which to be fair, is accurate — but it could also apply to just about any Star Wars-themed video game, movie, television show, toy, or object ever made.

His ally in the cause, Hawaii State Representative Sean Quinlan (D), later says that the “gambling” mechanic Battlefront II is a business practice more commonly seen in the mobile gaming market. That much is accurate. In games like Candy Crush, players can buy more lives to keep playing, which is why many games like this have methods of parental control over in-game purchasing.

Where Rep. Quinlan goes perhaps a little too far is when he assumes the game is “marketed squarely at children.” In actuality, the Entertainment Software Rating Board (ESRB) rated the game T for Teen, which tells consumers that they deem it suitable for gamers 13 and over due to its violent content. The “marketing” more realistically is aimed at teenagers and up. Granted, nobody pays much attention to ESRB ratings anyway, considering how many young children play as much Grand Theft Auto as they want, gunning down hookers like there’s no tomorrow.

Rep. Lee took to Reddit to clarify their position, confirming that the video itself was a kind of accidental upload. He goes on to say:

“These kinds of lootboxes and microtransactions are explicitly designed to prey upon and exploit human psychology in the same way casino games are so designed. This is especially true for young adults who child psychologists and other experts explain are particularly vulnerable. These exploitive mechanisms and the deceptive marketing promoting them have no place in games being marketed to minors, and perhaps no place in games at all.”

Is all of this just a gross overreaction?

On one hand, politicians stepping in to police video game mechanics does seem totally ridiculous. Why would state senators unite to protect this country from microtransactions in a Star Wars video game when there are many seemingly more important issues out there?

But on the other hand, were EA to successfully get away with these kinds of microtransactions, it could be disastrous for consumers if this became the new norm, diminishing the quality of the product while somehow making developers even more money.

Will actual legislation ever pass to protect us from games like EA? Maybe, but it’s astounding to think about how far this saga has already come, all because enough people complained about it on the internet.