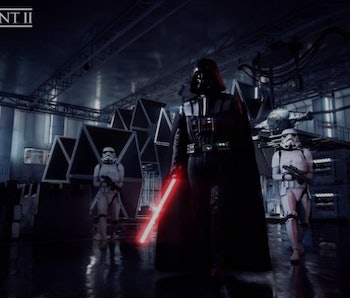 How much would you pay to slaughter Rebel scum as Darth Vader? What if you already paid $60 or even $80 for a game that promises just this? As it turns out, if you want to be Darth Vader in Star Wars: Battlefront II, you have to spend either a lot of time or money. Fans are positively livid.

Star Wars: Battlefront II promises epic confrontations between Yoda and Kylo Ren or between Rey and Darth Maul in non-canon competitions. But when you start playing later this week, very few of the franchise’s coolest characters will be available to you. Players have two options: Play the game and “grind” dozens of hours for the Credits needed to unlock the cool characters or you can spend real money on virtual “loot crates” that give you a chance at earning the currency.

Fans estimate that unlocking Luke or Vader would take up to 40 hours of playing. Buying your way there could cost any amount of money considering Credits are not a guaranteed reward. So that’s 80 hours of gameplay as generic stormtroopers and Rebels before you get the privilege of playing as Luke or his dad.

Fans hate that Battlefront II encourages this “pay to win” system rather than rewarding the players with more skill, and they’ve taken to Reddit to make their voices heard.

Activision’s response was predictably diplomatic, saying, “The intent is to provide players with a sense of pride and accomplishment for unlocking different heroes.”

But where is the pride or accomplishment for spending a hundred dollars to get Luke and Vader? As such, Activision’s comment broke records Monday to become the single most downvoted post in Reddit’s history. That’s how mad people are.

Microtransactions, which are the bread-and-butter of smartphone gaming, aren’t exactly new to triple-A games. As more and more potential players dump money into Candy Crush or even Star Wars: Galaxy of Heroes, larger game studios — like Activision — are struggling to figure out how they can literally cash in on the trend for console games. The trick is figuring out exactly what’s a fair reward for the players that do want to spend their IRL money.

Other franchises have a hard time determining the kinds of rewards players can buy, but randomization is almost always a factor. In games like Destiny and Overwatch, the rewards are almost entirely cosmetic, allowing you to equip your favorite characters with fun emotes or costumes. Generally speaking, they have no bearing on the actual gameplay, and they don’t give you any edge in battle.

Battlefront II presents us with an example of the wrong way to do microtransactions in a console game.

A key figure in this growing controversy is Star Wars: Battlefront II’s community manager Mat Everett. Normally, his job would be to advocate the game’s brand on social media networks. But on Sunday, he seemingly did the opposite by snarkily tweeting, “The arm chair developers on this internet.”

The term refers to the outcry of fans that always take to social media to complain about a game’s development choices even when they’re only consumers. Within the industry, it’s a popular complaint because gamers can often be some of the most toxic fans to have.

Everett later claimed his original tweet — which has since been deleted — had nothing to do with Battlefront II, but the sentiment remains the same. On the internet, fans have a voice, even when they sometimes shouldn’t.

On Monday morning, a Twitter user named Sean claiming to be a game developer working on Battlefront II said he had received 7 death threats as a result of the controversy. It’s all because of an “unpopular feature in a video game.”

And all this before the game itself has even been released. How will EA try to salvage this growing issue? Will it totally eclipse what looks like a genuinely good story campaign in Battlefield II? We’l soon find out.

Star Wars: Battlefront II, with its microtransactions and steep price for Darth Vader, releases November 17, 2017 whether you want it to or not.