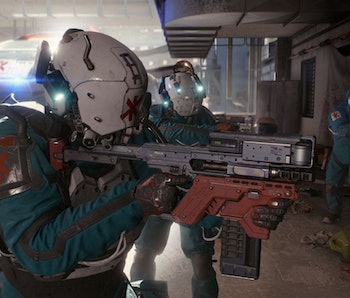 Cyberpunk 2077 DLC is still on the way despite the game's extremely rocky launch. The game was released with tons of bugs across all platforms and was nearly unplayable on base PlayStation 4 and Xbox One consoles due to frame rate and texture problems. While CD Projekt Red works hard to fix those issues, the developer has also confirmed both free and paid DLC for Cyberpunk 2077.

While the January and February bug fix patches might prove to be some of the game's most important, here's what we know about the DLC that is also planned for 2021.

When is the Cyberpunk 2077 DLC release date?

On January 13, CD Projekt Red published a video apologizing for the state of Cyberpunk 2077 at launch. In that video, they released a timeline showing what post-launch support of the game would look like. While they didn't give a specific date, it appears that the free DLC for Cyberpunk 2077 will drop after Patch 1.2, so they will be released over the course of spring and summer 2021. Previously, CD Projekt Red announced a vague early 2021 release window on the game's website

If the free DLC for Cyberpunk 2077 follows a similar release schedule to DLC for The Witcher 3: Wild Hunt, this free DLC should be released in waves over the course of several months following Patch 1.2.

After all of the backlash the game has received, it is clear that CD Projekt Red wants to focus on releasing their two major promised patches first to get the game in a working state on all platforms. From there, they can release working DLC across every platform. Don't expect the first DLC March at the earliest, if CD Projekt Red sticks to that roadmap.

As for the promised expansions, those have no concrete release date. Whatever plans CD Projekt Red had for it was probably pushed back slightly after the game's tough launch. It's common for games with troubled releases like Marvel's Avengers to push back DLC in order to fix the game first. As it's not on the roadmap above, we might not get the first Cyberpunk 2077 expansion until 2022. We won't know for sure until CD Projekt Red officially reveals it.

Is there a trailer for Cyberpunk 2077 DLC?

No, not yet. While CD Projekt Red has promised DLC for Cyberpunk 2077, they have not actually shown it off yet. A trailer for the DLC, and definitely the expansions, will likely be released before they launch. DLC was discussed in CD Projekt Red's apology video, which you can watch below:

The DLC for Cyberpunk 2077 will be a mix of free and paid DLC, just like with The Witcher 3: Wild Hunt. The free DLC is most likely just going to be smaller scale cosmetics or quests. This is what we'll get for sure in 2021. Meanwhile, the promised expansions will be much larger and deliver massive questlines for players to complete. These are expected to release after the free DLC and next-gen console ports of the game.

What is included in the Cyberpunk 2077 DLC?

We do not officially know what will be included in the free and paid DLC for Cyberpunk 2077 as of yet. The web page for the DLC just shows clips from the story, though the fact that Judy and Johnny Silverhand appear could suggest that they will be part of the DLC. A secret message in one of the game's trailers spotted by Rock Paper Shotgun also detailed what to expect.

For the free DLC, it says that "like with The Witcher 3, expect an assortment of free DLC packs to begin hitting Night City, dropping a bunch of cool stuff that’ll inject even more life into the world of the dark future." As for the paid expansions, they will "will take you even deeper into the world of Cyberpunk 2077, offering substantial, story-driven content that’ll give you tough choices to make through impactful narratives that you won’t soon forget."

A leaker on GameFAQs claimed that the free DLC and future updates for Cyberpunk 2077 will add cut missions, items, and dialogue back into the game, though CD Projekt Red confirmed that this post was fake. Cyberpunk 2077 has still sold well despite the controversy, so expect CD Projekt Red to continue to support it with a plethora of DLC after the game is fixed.

Cyberpunk 2077 is available now for PC, PS4, Xbox One, and Google Stadia.

This article was originally published on Jan. 4, 2021