"We didn't find out until he was introduced at some gaming event." 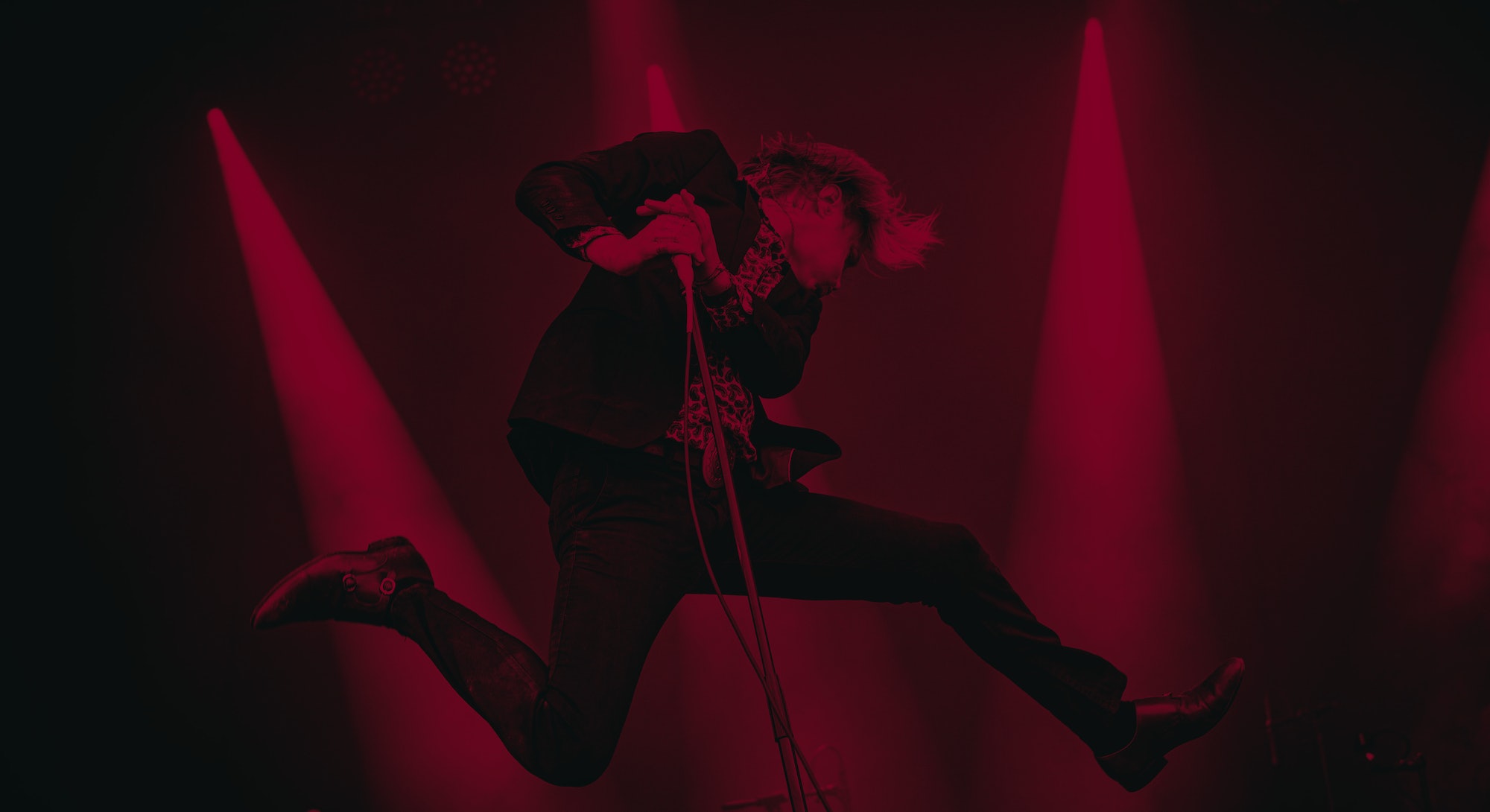 If anyone understands the life-changing power of the internet, it’s Refused frontman Dennis Lyxzén.

Now heralded as musical heroes, when the Swedish punks released their futuristic-sounding 1998 classic, The Shape of Punk to Come, the world vehemently rejected it. But 22 years after its release, Refused tops festival bills and plays to audiences of thousands. They also lent their talents to Keanu Reeves’ fictional rock band, Samurai, in the blockbuster video game Cyberpunk 2077.

An outspoken anti-capitalist, Lyxzén tells Inverse that “being in a multi-million dollar computer game is a bit weird.”

The collaboration marks the latest phase on a wild journey that's seen the band oscillate between the hardcore punk scene and mainstream popularity. Lyxzén spoke with Inverse about how the project allowed Refused to craft an alt-future version of themselves, the game's rocky release, and the moment he learned about the involvement of one of Hollywood's biggest actors.

After making a name for themselves tearing up sweat-soaked basements in the mid-’90s, Refused grew tired of the cliquey bullshit permeating the hardcore scene. Where their contemporaries still churned out the same old breakdowns, Refused’s third album orbited another planet. Back in 2010, Pitchfork lovingly described it as having "the sound of a world-class hardcore band deciding that they're done with hardcore." It was a record as likely to hit you with a radio-ready hook as it was to bombard you with glitchy electronic instrumentation or distorted jazz breaks.

As Lyxzén cries on the blisteringly brilliant “New Noise,” “How can we expect anyone to listen if we are using the same old voice? We need new noise!”

Turns out, the kids of 1998 didn’t want new noise. Thanks to dismal audience reactions, the band threw in the towel just months after the release of The Shape of Punk to Come. But the internet had other plans. With the music press and MTV belatedly discovering “New Noise,” Refused fever slowly spread across the globe. By 2006, the Swedish punks had become legends to many — including a few Polish guys who founded a game studio called CD Projekt Red.

Following the huge success of 2015’s The Witcher 3, which had sold more than 50 million copies as of May 2020, the developer shifted focus to a new project with a gritty, futuristic setting. For the Refused megafans making Cyberpunk 2077, there was only one band who could do the anarchist Johnny Silverhand justice.

The developers reached out to Lyxzén via the suitably dystopian medium of Instagram DM. Initially, he was nonplussed by the offer.

“I am not a gamer," Lyxzén says. "I didn't know anything about it. So I just kind of passed it on to my management and they were like, ’Holy shit — this is big time!’ It turned out that both the director of the game [Adam Badowski] and the whole team were huge fans. The original idea was for them to create music, and then for me to sing it. Then they asked, ‘do you think you can do this with Refused?’”

The rest, as they say, is history. Years after attracting the bile of the hardcore scene for daring to experiment with the genre, Refused find themselves once again watching the internet redetermine a piece of art’s fate.

He is, of course, referring to Cyberpunk 2077’s remarkably disastrous launch. While CD Projekt Red’s hugely anticipated release features some excellent storytelling and voice acting, a litany of bugs and performance issues prompted an outpouring of online derision and even prompted Sony to take the unprecedented step of removing the game from the PlayStation digital storefront. (Despite the rocky launch, the game still sold 13 million copies just 10 days after release.)

“I mean, it's a bit of a bummer,” Lxyzen says. “I hear the actual game is great though … there are just a lot of bugs. There's nothing really we can do about that. I guess it is more of a bummer for CD Projekt Red because I know how much work they put into it. But from what I understand, the actual game is pretty amazing.”

Cyberpunk represented an opportunity for Refused to flex new creative muscles and refine some of their existing material. But Lyxzén points out that writing and recording had a markedly different feel from the band's previous albums and EPs.

“Refused is one of those bands that says ‘All right, let's do a record’ and three years later, the record comes out,” he says. With Cyberpunk, we had this process where [CD Projekt Red composer P.T. Adamczyk] showed up in Sweden and we did everything in two weeks, which for us is insane.”

While the creative process was a bit of a whirlwind, Lyxzén reveals that a mix of B-sides and brand new tracks resulted in the body of work now attributed to Samurai.

“A couple of Samurai’s songs were Refused songs that we didn't finish for [2019’s War Music]. Now they are bigger than any song on that record!” he says with a smile of disbelief.

While Refused has licensed its songs for films and other media before, it was working with the fictional element of Cyberpunk 2077’s world that Lyxzén most enjoyed. Pouring over the companion books for the original tabletop game that inspired CD Projekt Red’s game, he was determined to do this fictional band justice.

“Samurai is actually in the Cyberpunk book – and I think ‘Black Dog’ and ‘Chippin’ in’ are songs that exist in the mythology. I tried to use lyrics from those songs to blend in with the stuff that we were writing. It’s a very different way of approaching songwriting. I really, really enjoyed it.”

Working on the project, Lyxzén was surprised by the relative lack of crossover between the gaming and music worlds. Refused’s re-worked B-sides have racked up millions of plays, thanks to Cyberpunk. Yet few in the music world were aware of the collaboration.

“I did an Instagram post when Cyberpunk came out, saying ‘Refused are Samurai, I'm the voice of Keanu Reeves’ and almost all my friends who were musicians had no idea,” says Lyxzén. “The songs had done well and been out a while, so it feels like parallel worlds, almost. Hopefully, we can get some crossover — get some gamers to come to hardcore shows and hang out!”

“I know, it's weird!” Lyxzén says with an infectious laugh, “It was interesting to create a future version of ourselves, so to speak, because both the director and composer were like, ‘We want to model this band after the sound of Refused, but in an alternate reality.’ It was quite an honor to be asked to do something like that.”

Lyxzén and his bandmates didn’t find out about Keanu Reeves’ role in the game until the rest of the world did.

“When we wrote the songs, we didn't know that it was Keanu playing Johnny Silverhand,” reveals Lyxzén, “It was all super secretive and we didn't find out until he was introduced at some gaming event and came out to “Chippin’ In” and I'm like, ‘Holy shit is that him? That's wild!’”

By “some gaming event” Lyxzén is referring to E3, the annual trade show in Los Angeles that typically hosts some of the industry's biggest reveals each June. The actor’s surprise appearance during Microsoft’s conference in 2019 was the first announcement of his role in the game, and spawned a deluge of memes.

Unfortunately, Covid cut short the band’s plans to perform live as Samurai and meet Reeves in person. But Lyxzén’s not ruling out crossing paths with his alter ego down the line.

“The plan was obviously to do a big release party," he says. "There was an idea that we should play as Samurai, and then Covid happened. So all the plans fell apart. But maybe one day. If I ever see Keanu, I'll have a conversation starter for sure!”