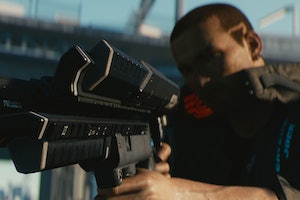 'Cyberpunk 2077' best weapons: How to get Lizzy, Mantis Blades, and 3 more

If there’s one thing Cyberpunk 2077 gets right, it’s futuristic weapons. The open-world game is full of unique loot that makes good use of its science-fiction setting. Some of the guns and melee weapons available have wild perks that make them as unique and must-own as an exotic weapon in Destiny 2.

These “Iconic” weapons are extremely powerful and can be upgraded to keep scaling their damage up with player level. Of course, there are also a lot of weapons in Cyberpunk 2077, so it’s hard to know what’s worth equipping when your inventory is filled to the brim with steel. If you’re paralyzed by all the options available, here are the five best weapons in the game and where you can find them.

Widow Maker is an iconic tech precision rifle that’s easy to miss, but you certainly shouldn’t skip over it. The rifle’s primary perk is that it fires two rounds per shot, which means that it's capable of taking enemies down fast. The gun deals chemical damage and has an increased chance to leave enemies poisoned, making it even deadlier. On top of all that, charged shots do even more damage. All of that makes it a versatile weapon that works with both aggressive and safer playstyles.

You can get the gun during the main story mission Ghost Town. Panam will eventually ask you to help her take down Nash. Agree to the plan and you’ll head to a cave for an all-out assault. Kill Nash and loot his body to add the gun to your arsenal.

A good sniper rifle is a must-have in Cyberpunk, especially during some of the game’s main story missions. As far as snipers go, Overwatch is one of the best you can find. There’s nothing terribly fancy about it when it comes to perks; it just hits hard. With high base damage, an above-average reload speed, and a built-in silencer, you can quickly and quietly wipe out an entire pack of enemies from afar before they realize what’s happening.

To get this, simply complete the side mission Riders on the Storm. As the mission ends, you’ll find it next to your bike, so you can’t miss it.

Ever since I found Lizzie, it hasn’t left my first equipped weapon slot. As far as pistols go, it’s a tiny powerhouse that quite literally melts enemies. Lizzie is a burst pistol that shoots an extra round every shot and increases the number of rounds fired when charged. It has a 13 percent chance to cause burn damage, so it tends to light enemies on fire a lot. Throw in a 1.2 headshot damage multiplier and you’ve got one hell of a pink pistol.

You’ll be able to grab this relatively early in the game during the Automatic Love mission. You’ll head to Lizzie’s bar as part of that quest and talk to Judy. After doing that, head outside of the room she’s in and you’ll find it on a table just outside. It’s technically missable, but since it’s bright pink, it kind of stands out.

The Mantis Blades are quickly becoming Cyberpunk’s most iconic weapon. As far as melee tools go, they’re simply a blast. These bug-like blades attach to your arms, allowing you to quickly slice-and-dice enemies up like a human Scyther. They also allow you to leap to leap towards a target causing an extra chunk of damage. And for good measure, they have an increased chance for bleed damage. Simply put, there’s no other weapon in the game that plays quite like them.

There are two ways to get these.

Skippy isn’t just meme-bait; it’s genuinely the best weapon in the game. The pistol has a cartoon bullet hologram built into it, which talks to you. It’s bizarre enough on its own, but that’s not what makes this gun special. It comes with two targeting modes: Stone Cold Killer, which automatically targets an enemy’s head, and Puppy Pacifist, which opts for body shots. This sounds a bit counter-intuitive, but set the gun to Puppy Pacifist at first. After you get about 50 kills, the gun will ask you why you prefer to main enemies instead of kill them. Say “I don’t know” and the gun will permanently default to Stone Cold Killer mode, meaning you’ll always land headshots on enemies with it.

This one is part of a side mission in Heywood. Head to the Vista del Rey area and look for a quest marker on the eastern border, near the river. You’ll loot Skippy off a dead body in an alleyway near that marker. You can turn the gun in for a reward as part of the mission, but you’re better off keeping it for yourself.