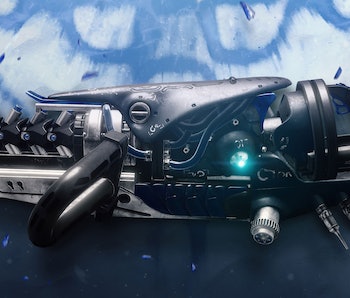 Destiny 2: Beyond Light introduces an ice-cold new ability: Stasis. This allows Guardians to freeze enemies and create giant walls of ice. In addition to augmenting character classes, there’s one weapon in the game that can cause stasis damage. Salvation’s Grip is a new exotic grenade launcher that fires stasis crystals, but it also has an important use outside of combat. You’ll need it later in the game to destroy entropic shards.

If you want to grab Salvation’s Grip, you’ll need to finish Beyond Light’s main campaign to unlock the Stasis prototype quest. Here’s every step you’ll need to follow to get it.

What is Salvation Grip’s exotic perk?

Salvation Grip has a special perk called Cryocannon, which basically means that it freezes enemies. You can even charge it up to fire a giant ice crystal. That can come in handy when dealing with big crowds. It’s not a weapon that you’ll use to rack up kills on its own, but it goes hand in hand with your Stasis subclass. For example, a Warlock could freeze a batch of enemies and then use their super ability to shatter them all with a shockwave.

It’s admittedly niche, but you’ll mostly need to get this if you want to destroy entropic shards, which is how you’ll get the Aspect of Control.

To start, you’ll need to kill 10 Captains and 10 Servitors around Europa. Your best bet is heading to Camdus Ridge and driving around on your sparrow as Fallen ships drop new enemies. Both enemies will spawn fairly regularly, so it’s just a matter of patience. The area is also home to public events, one of which will spawn lots of Captains.

If that seems slow, you can always jump into Europa strikes or revisit story missions, which tend to have these enemies scattered throughout. It’s a good excuse to kill two birds with one stone if you have a few quests in your inventory that ask you to run those activities.

Next, you’ll need to complete an Empire Hunt. This is a post-campaign activity unlocked by completing the Reclaiming Europa and Empire’s Fall quests. If you haven’t already unlocked Empire Hunts by the time you get here, simply complete those quests, as they’ll culminate in an Empire Hunt which counts towards your progress.

If you’re already past that quest, simply buy one from Variks using Herealways Pieces and jump into battle.

Nothing fancy here. You’ll just need to kill enemies using stasis abilities until your progress bar hits 100%, plain and simple. Equip your stasis subclass and load in to your favorite activity to grind this out. As long as enemies have been touched by stasis in some way, your kill will go towards this. Gather up a fireteam of friends if you can and have everyone equip their stasis subclass to maximize the number of kills.

Again, the best thing to do is focus on any other quests you have to do, as you’ll be able to check this off no matter what you decide to do.

You’ll need to complete a specific Europa Lost Sector to proceed. Look for the marker in Asterion Abyss to enter the Concealed Void Lost Sector. Once you’re there, complete it as you normally would: kill the enemies, defeat the boss, loot the chest.

Before you leave, you’ll bump into a Fallen NPC, who’s an associate of Spider, from the Tangled Shore. Talk to him and he’ll give you Skiff Codes. Once you have those, head back to the Tower and speak to the Drifter to get your next step.

The Drifter will give you a proper quest called Stealing Stasis, which is pretty straightforward. Progress through the mission until you reach a chamber containing Salvation’s Grip trapped behind a barricade.

Once you hack three terminals in the room, the shield will drop and you can grab the weapon. You’ll have to escape with it, culminating in a big fight against a few Brigs. Make sure to equip the gun to try it out here as there will be plenty of heavy ammo crates in the final arena.

Now all that’s left to do is return to The Drifter on the Tower and deliver the good news. Enjoy your new grenade launcher in all its icy glory.

Destiny 2: Beyond Light is now available.