"I would really like to see more from that relationship." 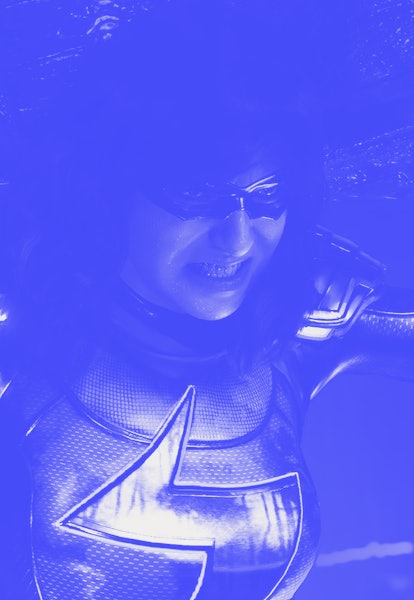 Sharing the stage with Earth's Mightiest Heroes can be a daunting prospect.

Marvel’s Avengers, the video game from Square Enix released back in September, features a star-studded cast including Uncharted’s Nolan North as Iron Man and The Last of Us’ Troy Baker as The Hulk. But the standout performance comes from Ms. Marvel, played by Sandra Saad, whose previous voice acting work includes Rage 2 and Call of Duty: Modern Warfare.

“It’s cool to see that our hard work over the last couple of years is being appreciated” she tells Inverse. Saad says it’s been exhilarating to connect with Marvel fans and hopes “the story continues as long as the fans want it to.”

Saad spoke with Inverse about bringing Ms. Marvel and her alter-ego Kamala Khan to life alongside the games industry's best-known voice talent, her comedy background, and where she’d like to see her Marvel's Avengers character go next.

What was it like doing motion capture for the first time?

It was really awesome — I got to utilize everything that I'm used to bringing to a regular stage or set by using my full body. Every single movement gets detected. It’s really cool to not only focus my energy on just what's coming out of my mouth but to know that any little thing can affect my performance. If Nolan looks at me a certain way, the whole scene will go differently.

How did you keep your portrayal of Kamala distinct from Ms. Marvel?

You can really tell there is a difference right when she's like in fight mode, instead of just chilling and drinking a Slurpee. There’s that innocence that definitely carries through either way. She is the same person throughout, really fiery and gung-ho about getting the bad guy.

I have a really awesome stunt woman named Melissa Prather who took on a lot of the big fight scenes for me physically. But there are definitely some moments where you could tell that I'm doing the stuff.

How did Ms. Marvel differ from the roles you’ve had in other games?

Kamala is really relatable, and we have similar personalities, pretty bubbly and excited. We’re both first-generation Americans. It was really nice to be able to bring that experience into this role — it's not often you can do that. There's a moment when Kamala brings her comic book to A-Day, and her dad tells her "your differences are your greatest superpower." That whole idea of embracing who you are played into my experience of making this game.

I’m so lucky to have worked with our director Shaun, too. He's a man of color and has similar experiences to Kamala. He is very encouraging of the whole cast to just bring what they already know and use their art, however it comes.

How much improvisation did you do while performing?

It would almost be a crime to put Troy Baker and Nolan North together and not use whatever they come up with. It was an encouraging atmosphere to go with the flow and see what comes out.

There were scripts that we memorized and performed to the tee. But every once in awhile, I'd make a joke and Troy would latch on and go on with it. It’s a nice ripple effect. I'm a big comedy nerd — I studied at UCB and Groundlings.

How do you think your comedy background shaped your portrayal of Ms. Marvel?

One important thing I learned is just being comfortable and being your own person. What you and I think is funny could be super different because of our experiences as human beings. It's okay to be who you are.

What do you hope to see for Ms. Marvel in future story updates Marvel’s Avengers?

There were several comics with her and Iron Man that were really cool, and I would really like to see more from that relationship. Iron Man could be so gruff, but he's got a heart of gold. He’s not an Iron Man on the inside.

Do any moments or scenes in the game stand out as a particular favorite to you?

I love every scene with Abu [played by Brian George] — he brings these really solid morals that stick around for the whole game, like the “embrace your power” thing. The MODOK scenes with Usman Ally are amazing. The very last one was so intense to shoot. Watching him perform has really been such a gift — he's an incredible actor.

Marvel's Avengers is available now for PC, PS4, Xbox One, and Google Stadia.