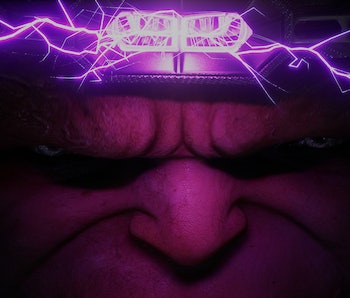 The story of Marvel's Avengers may be all about Ms. Marvel, real name Kamala Khan, but after the credits roll on the main story campaign, the game's post-credits scene hints that her predecessor, Captain Marvel, isn't far behind.

Last week, fans of the Marvel Universe got a killer substitute for the year's delayed MCU movies like Black Widow in the form of Marvel's Avengers, a new co-op action game from Crystal Dynamics and Square Enix. While the game lets players live out their Marvel fantasies and control heavy-hitters like Thor and Iron Man, much of the game actually revolves around the growth of Kamala Khan, a Jersey City teenager who idolizes the Avengers, Captain Marvel most of all.

Several years after a disastrous event called "A-Day," Kamala ends up with polymorph superpowers, which she uses to help reunite her disbanded heroes to fight against the powerful private arms corporation, Advanced Idea Mechanics (A.I.M.), and its leader, M.O.D.O.K.

For impatient fans who want to be spoiled on the ending of Avengers or need more context as to what's coming next, here's all you need to know about the ending and the post-credits scene of Marvel's Avengers.

Spoilers for Marvel's Avengers ahead.

The end of Marvel's Avengers involves a big battle. Literally.

The heroes return re-assembled — with nifty costume upgrades — and fight M.O.D.O.K. once and for all. Out of nowhere, M.O.D.O.K. reveals a dormant Kree Sentry, a giant humanoid robot built by an advanced alien species that Marvel Cinematic Universe fans are probably familiar with. (Note that it's Thor, who has likely met the Kree in the past, who knows what a Kree Sentry is when his fellow Avengers question what they're looking at.) Kree Sentries first appeared in Fantastic Four #64. And now, one of them is under M.O.D.O.K.'s control.

In the climax, Kamala overcomes her inability to stay "embiggened" as she clobbers the Kree Sentry piloted by M.O.D.O.K., who falls into the ocean. Kamala passes out, and wakes up later surrounded by the Avengers who thank her for bringing them back together. Later at home, Kamala greets her father with a hug and he agrees to keep Kamala's new life as a superhero a secret.

Like any Marvel movie, there's a post-credits scene that sets up what's to come.

First, we learn that Monica Rappaccini, previously M.O.D.O.K.'s second-in-command at A.I.M., is not only still alive (it is made clear that only one of her clones was killed by M.O.D.O.K.), she has now assumed leadership over A.I.M. as its new "Scientist Supreme."

"Make no mistake. A.I.M. is still the future," Monica tells the shadowy A.I.M. board. "From cloning to time travel, the possibilities are endless." She's right, because what happens next blows the scope of Avengers wide open. At the rubble of the final battle, a hidden door at the throat of the Kree Sentry opens up to reveal a shuttle or signal of some kind that flies off into space.

How the post-credits may set up Captain Marvel

It isn't clear at first glance, but the post-credits scene is an indicator that the Kree — and Captain Marvel — are on their way.

First, to be clear, we don't know what it was that came out of the Kree Sentry. It could be a space pod (and if so, what or who was in it?), or it could be a beacon. Heck, it could even be an Infinity Stone. But it it is some kind of beacon, that can only mean the downed Kree Sentry is calling for Kree reinforcements to converge on Earth.

If the Kree are indeed coming to Avengers, then that can only mean Carol Danvers, aka Captain Marvel, will arrive as well. Danvers is no secret in this universe; in the game's prologue at A-Day, Captain America tells a young Kamala that Carol Danvers is "off-planet." As the game's story continues, she remains off-planet doing who knows what. (Probably Kree business!) But make no mistake: There's no featuring the Kree without Captain Marvel, a human-Kree hybrid.

In the Marvel Cinematic Universe, which has a tremendous influence on Marvel's Avengers, Carol Danvers was an amnesiac ex-Air Force pilot who became a Kree Starforce officer. She later defected when she discovered the dark secrets of the Kree in their conflict against the Skrulls. In the present day of the MCU, she's a full member who helped in the fight against Thanos' forces in the finale to Avengers: Endgame.

While it's unknown precisely how much Marvel's Avengers will take after the MCU when it comes to Carol Danvers/Captain Marvel, it's a safe bet Carol isn't associated with Starforce considering that the moment the Kree beacon was sent carries a more ominous tone than a hopeful one.

Hawkeye, his protege Kate Bishop, and Spider-Man (a PlayStation exclusive) are confined for Marvel's Avengers. Black Panther remains unconfirmed; the previous "War Table" held on September 1 was "altered" in observance of the death of actor Chadwick Boseman, who played T'Challa/Black Panther in the MCU films. It is popular speculation (and only speculation) that Black Panther was scheduled to be announced as DLC but was pulled out of respect for the late actor.

Beyond that was a batch of leaks before the game's launch that claimed Captain Marvel was in the pipeline as a DLC character as well, alongside War Machine and She-Hulk.

Is this setting up Secret Invasion?

Like the MCU, the arrival of the Kree and maybe the Skrulls hints at a potential adaptation of the 2008 Marvel series Secret Invasion, in which an unknown population in the Marvel Universe turned out to be shape-shifting Skrulls in disguise. It's admittedly hard to imagine that scenario working in a co-op game like Avengers, but Crystal Dynamics did tell Inverse that the comics are a great indicator for the game's ongoing narrative.

"These stories set up a world state when you finish the [single-player] campaign, and you discover how it ties back to the comics. It's kind of a one-off, but some months later, suddenly it pays off," said Crystal Dynamics Head of Studio Scot Amos in an interview with Inverse. "We'll start kind of breadcrumbing those experiences for people, keep bringing them back to see where the story goes next. We desperately want people to get into this world, then stay in this world."

Marvel's Avengers is playable now on Xbox One, PlayStation 4, and PC.