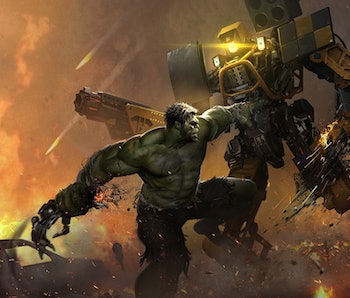 Marvel's Avengers, the ambitious new games-as-a-service superhero title from Tomb Raider developer Crystal Dynamics, is about to change superhero games forever. While Deluxe Edition players already have early access to the game, everyone else waiting for the standard edition to unlock might be wondering when exactly they can hop on and start playing Marvel's Avengers.

Here's everything you might want to know about the launch of Marvel's Avengers.

When is the Marvel's Avengers release time?

Marvel's Avengers launch times were detailed in a launch day blog post published by Crystal Dynamics and Square Enix back in August. On PS4 and Xbox One, the game will go live at 12 a.m. local time on September 4, 2020. This release happens on a rolling basis, which means players on the east coast will get access three hours before those on the west coast.

As for the PC and Google Stadia versions of Marvel's Avengers, they will go live across all regions at 12 p.m. Eastern on September 4, 2020. If that elongated wait for the release of Marvel's Avengers is too much for you, can still buy the more expensive Deluxe Edition or Earth's Mightiest Edition to gain instant access.

Can I pre-load Marvel's Avengers?

As is the case with any major release, you can pre-load Marvel's Avengers if you have it pre-ordered on PC, PS4, and Xbox One. Once you pre-load Marvel's Avengers, you can access it right at the aforementioned release time. Google Stadia does not require any downloads, so you'll just see it pop up in the store when it becomes available and can instantly access it there.

What is the Marvel's Avengers file size?

While there were reports that Marvel's Avengers would take up 90 GB of hard drive space, this actually isn't the case, at least on PS4. Inverse already has access to the game and can confirm that it will take up 57.89 GB on PS4. While it's lower than expected, this file size is bound to only increase over time as more characters and Operations are added to Marvel's Avengers.

Does Marvel's Avengers have a day one patch?

Marvel's Avengers will receive a significant 18 GB day one patch across PC, PS4, and Xbox One. According to the developers, this patch will include "several updates and refinements that are required for play," localization in 15 different languages, and "lots of fixes, feedback, updates, and tuning from our Beta weekends." It will be for anyone that has a physical edition of the game.

This day one patch is required for anyone who plays Marvel's Avengers, which is to say that it's not optional. The game requires a one-time internet connection before you can play. It isn't always online, but you'll need to make sure that the game is fully installed and updated before the application will let you actually play the game.

Marvel's Avengers will be released on September 4, 2020.

More like this
Gaming
5.5.2022 4:30 PM
The worst trend in gaming is more boring than you think
By Willa Rowe
Gaming
5.11.2022 8:05 PM
Everything we know about the crab souls-like Another Crab’s Treasure
By Hayes Madsen
Entertainment
5.4.2022 4:30 PM
Ten years ago, Marvel's 'The Avengers' gave Hollywood a new superpower
By Eric Francisco
Related Tags
Share: