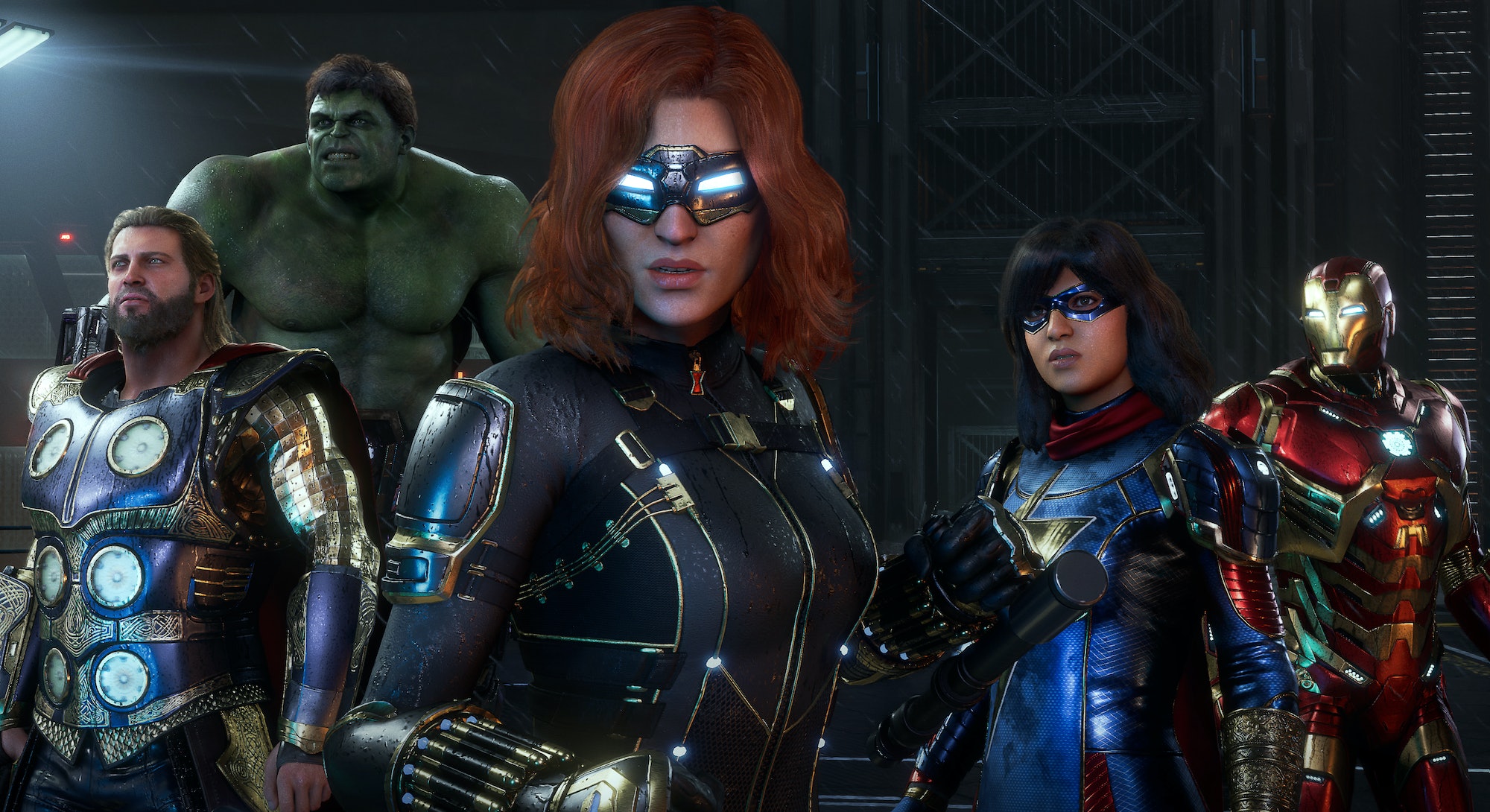 The beta for Marvel’s Avengers, developed by Crystal Dynamics and published by Square Enix, starts off on the wrong foot.

In the early missions, every character feels homogenized in a way that seemingly neuters them. As you level up heroes like Iron Man and the Incredible Hulk, you can choose unique skills for each, play with friends, and explore the more open-ended War Zone levels. You’ll eventually discover — even within the limited beta — that it takes a significant time investment before you get to the great stuff. And as underwhelming as the game can feel at times, it still bodes well for what the final version might be able to deliver when it's released on September 4, 2020.

Inverse played the entire beta before it opens up to PlayStation 4 players who pre-ordered the game on August 7, which gave us a taste of both the single-player experience and some of the multiplayer mission variants. Right now, Marvel's Avengers feels caught in between Infinity War and Endgame, and we're still waiting for that triumphant flourish when things get truly epic — we just have to wait for it.

You have to play through several hours of single-player missions before you can play online with friends in the beta, which feels like a strange choice. Players start with the A-Day mission that been showcased in most trailers since the game’s reveal. It follows the team as they unite for a day of celebration but are broken apart after a mysterious attack leaves San Francisco in ruins. Later, things jump ahead so we can play with totally different characters. These missions collectively feel a bit too linear for their own good, exposing some of the flaws in a combat system designed to accommodate several characters with wildly different movesets.

The A-Day mission is the only time you’re able to control Captain America and Thor as they fight off Taskmaster’s goons on a Helicarrier and the Golden Gate Bridge, respectively. Aiming and tossing around Captain America’s shield to hit multiple enemies feels satisfying and his powerful hand-to-hand combat suits the beat ‘em up gameplay well.

Meanwhile, Thor adds Mjolnir into the mix which functions similarly to Kratos’ ax in God of War (2018). While you don’t play enough to get an amazing feeling for this or even Thor’s ability to fly, he is one of the game’s more promising heroes with a diverse array of abilities that truly make the player feel powerful, as opposed to Cap's more traditional combat style. Still, this mission is a bit too on-the-rails and scripted to be all that fun, even if it functions as a suitable introduction to the experience.

The next beta mission skips ahead several years to let you play as the Incredible Hulk and Kamala Khan, aka Ms. Marvel, as they fight to recover JARVIS from an AIM base.

The cramped environments sometimes mess with the game’s camera, and even though it’s incredible to experience combat as Hulk in a video game, he feels like the one character that suffers the most from how homogenized the many character playstyles feel. Hulk seems to not pack as much of a punch as he did in his retro solo games like Ultimate Destruction, though there are fleeting moments of enjoyment as you grab and toss enemies around.

Eventually, you take over as Ms. Marvel, who can “Embiggen” herself to grow parts of her body. She’s a heavy-hitter with a healing ability for support, which is an interesting combination that'll make her vital for online multiplayer. This mission's capstone is a straightforward boss fight against the Abomination where you play as Hulk, and the experience is memorable.

Homogenized playstyles for these different heroes feels somewhat repetitive despite the fact that they each have different abilities and even entirely different combat systems. In terms of representation, it’s a thrill to see characters like Hulk, Ms. Marvel, and Black Widow represented as main characters in a modern AAA title like this.

The last few missions involve restoring a Helicarrier to establish the player’s base of operations, where you can engage with vendors and use the War Table, which is where you can choose missions. There are some cool Easter eggs to find here, and this is clearly the point in the game where everything opens up. If this were Destiny, a very different games-as-a-service title, this is when your Guardian reaches the Tower hub space.

For some reason, these early single-player missions aren’t replayable in the demo, but we're hoping they will be in the final game, as they tell a very different story than anything from Marvel Comics of the Marvel Cinematic Universe. The demo barely scratches the surface, but it's an intriguing story of redemption and renewed hope befitting of most good superhero stories.

A different kind of Warzone

Clearing all the story missions opens up several kinds of multiplayer missions across three different environments. We were able to play through all of them, with the exception of a War Zone set within a city, which will be added when the beta officially launches.

Iron Man and Black Widow are playable in these missions. It’s exhilarating to fly around as Iron Man, even if Iron Man VR has already done this in a more immersive way this year. Switching between Tony Stark’s different gadgets and summoning the Hulkbuster is entertaining. He’s probably the fastest and most well-rounded character in the beta.

At first, Black Widow feels like a fairly basic and boring gameplay clone of Batman from an Arkham game. But after a few upgrades, she quickly became the most interesting of all the playable heroes. Her rapid-fire guns shock enemies from afar, dealing a lot of damage and opening the opportunity for some exciting takedowns.

While the heroes all start to feel more and more different as you level them up and unlock more skills and costumes, the first impression in this beta is definitely underwhelming. If a character doesn’t jive with you right away, try to stick with them and upgrade them a bit to see if you can find some upgrades that you like.

You can easily grind up your characters’ power levels in the HARM Rooms, a wave-based horde mode also used for training. It is a bit dry and repetitive by yourself, but the experience becomes far more enjoyable with others. This critique applies to all of Marvel’s Avengers multiplayer modes really, as players can mess around with each other as well as show off skins, emotes, and other unique abilities that you’ve given your character.

Drop Zones task players with single-objective missions in assaulting AIM bases that look almost identical, so the experience is pretty forgettable. The wider War Zone missions fare much better though, unleashing players in a wide-open environment with multiple objectives and sometimes major boss fights that benefit from teamwork.

The objectives could’ve been a bit more interesting than just chests and enemies, but hopefully, this is just a problem for the beta missions. While these can get repetitive as the moment to moment gameplay doesn’t really change, they at least have you constantly moving, fighting in different environments, and sometimes solving different environmental puzzles.

Marvel’s Avengers is fairly similar to titles like Destiny 2 and Tom Clancy’s The Division 2, so if you don’t like those titles, you’ll probably get bored with the beta very quickly. Dedicating oneself to a game like this can easily involve a long-term commitment that can provide hundreds of hours of entertainment. As such, it's not for everyone. On a more casual level, it’s still a lot of fun to mess around with your friends as your favorite superheroes. Marvel’s Avengers is at its best when players are let loose in open environments like the War Zones to just wreak havoc with friends.

While this beta doesn’t make the best first impression, try to stick with it and level your characters up. As you do, the combat gradually starts to feel much more nuanced as you're thrust into increasingly more complex levels.

Marvel’s Avengers should be an easy sell in a post-Infinity Saga world, but the leadup to its launch has been marred by mediocre visuals and some questionable marketing tactics. There’s also console exclusivity for Spider-Man DLC on PS4 that will probably frustrate Xbox One players. Collectively, these and other factors have made it hard to get totally hyped for what should be a slam dunk for Square Enix.

Despite some repetitive missions and playstyles for characters early in the game, it still seems highly likely that the final product might pull through and deliver a more bombastic final product. Marvel’s Avengers is an enjoyable co-op games-as-a-service title at its core that will please anyone who found Marvel Ultimate Alliance 3 to be a bit too simplistic. But will it be able to capture gamers' attention for months and years like the Destiny franchise has? That remains to be seen.

The Marvel’s Avengers beta runs on PlayStation 4 from August 7 to August 9.