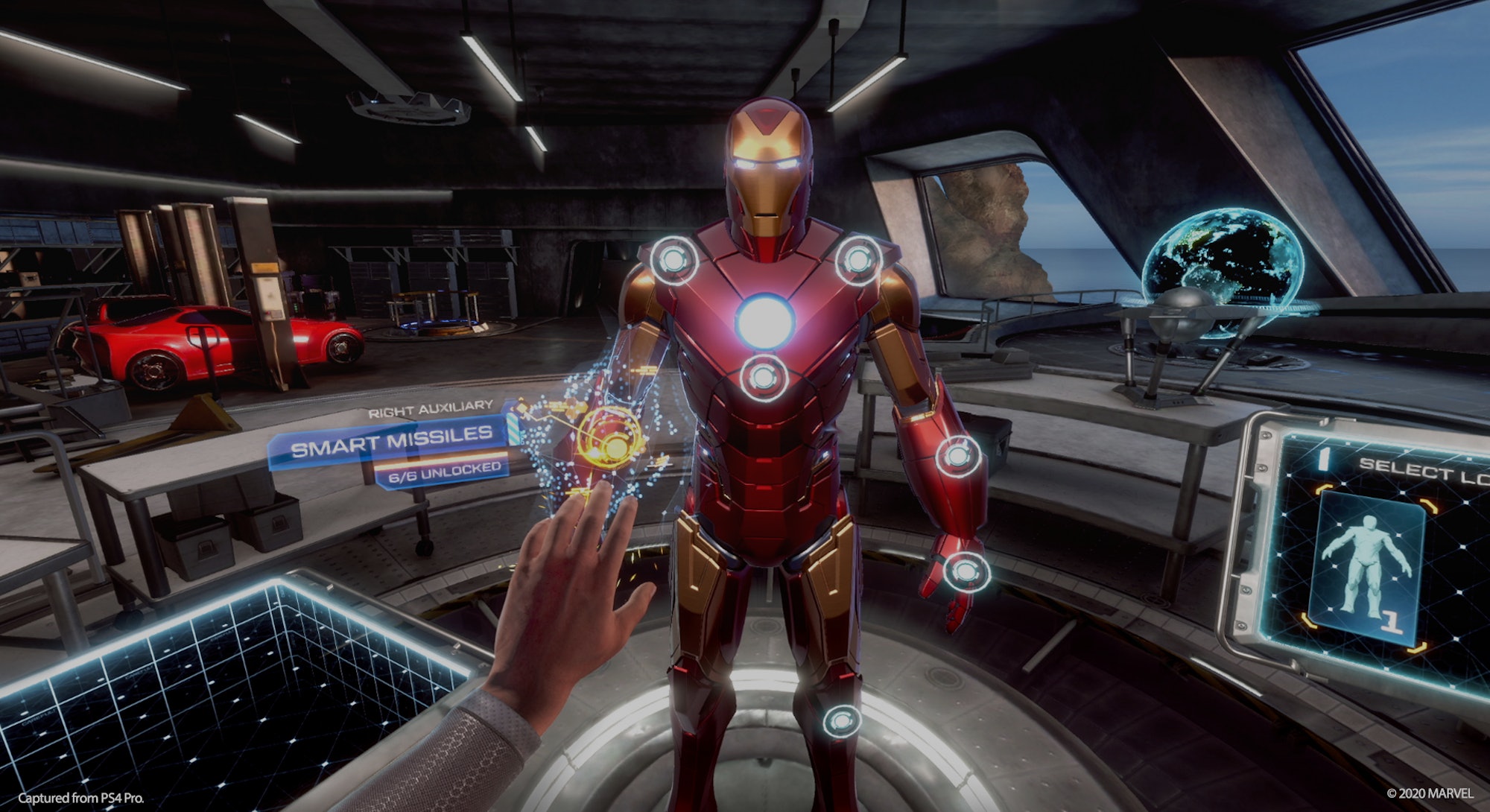 In 2017, I worked part-time at a VR arcade. We touted over 50 “experiences” that you could play for short bursts, but the staff knew only three – Superhot, Space Pirate Trainer, and The Climb – were worth playing. If I still worked at that arcade, Iron Man VR would likely join my shortlist of must-play VR games. When Iron Man VR’s gameplay gets it right, there’s nothing quite like it. But it doesn’t always get it right.

These gameplay highs are unfortunately tucked away behind a meandering story and intense degrees of tutorial padding. If you could hop right to the middle or skip pointless tutorials, Iron Man VR could’ve been my favorite VR game of all time. As it stands now, the game is rather lackluster for the initial two or three hours, enough time to turn off anyone already experienced with VR.

Iron Man VR’s story is set up rather oddly. It has difficulty deciding if the audience is intimately familiar with Marvel, or if this is their first introduction to Iron Man. The game opens as Tony Stark leaves the weapons industry, which he did during the first Iron Man film, situating us firmly in origin story territory. Iron Man VR then skips years into the future, without explaining what occurred in the intervening time, implicitly assuming the audience should already know.

Once we get there, Tony needs to deal with the impact of his past deeds. The mysterious villain known as Ghost blames him for lives lost to Stark Industries' weapons. Ultimately, I felt disoriented by not knowing where Tony's character stood during his arc. At times, Tony seemed closer to Peter Parker in personality than his normal sarcastic demeanor. This dissonance was deepened by Tony’s voice actor, Josh Keaton, who is known primarily as the voice of Spider-Man from 2008-2009 classic, The Spectacular Spider-Man.

The gameplay in Iron Man VR is the strongest component. Soaring through the skies feels fantastic. Viewing the expansive outdoor environments from up high feels freeing after months of being stuck inside. Maneuvering through tight spaces at high speeds is challenging is thrilling. There’s a bit of a learning curve, but once you get it, every movement feels deliberate and great. You’ll have ample time to learn how to fly because the first four chapters are essentially a drawn-out tutorial. If you’re a quick study, these levels will feel painfully limiting.

Once you reach Chapter 5, Iron Man VR finally starts taking you seriously by throwing multiple types of enemies your way at once, requiring you to vary your attacks with each foe and adjust your flight pattern. Even with this admittedly fun challenge, the actual level design feels limiting. Tasks are drawn out using a “retrieve x object” or “defeat x number of waves” objective, making things feel repetitive. If the levels were shorter, enabling me to play in smaller bursts this wouldn’t be a problem. Similar to the game’s indecisive stance on the player’s Marvel savviness, this feels like Camouflauj can’t figure out if this is the player’s first VR game or their 27th, which limits its appeal to both audiences.

As you progress through the game, you’ll unlock combat trials, which are incredibly fun. They’re just the right dosage of everything. If you have a friend over, this would be the section to show them. It’s this section that would blow guests away at my former VR arcade job. The trials are varied and feel addictive due to their very consumable length. If the entire game was like this, I could easily see Iron Man VR becoming one of my favorite VR titles. It’s unfortunate that these trials feel more streamlined and confident than the main game. Once you beat the story, the trials make your purchase feel worth it.

Iron Man VR is a mixed bag of VR gameplay that lacks confidence in its identity. When it’s able to work up the energy to trust the player enough to take on a challenge, the gameplay becomes ineffably fun. Unfortunately, this is a rare occurrence that’s limited to either late or post-game challenges, pushing away those without the patience to endure the lengthy tutorial-centric levels. Once you’ve beaten the game, it’s very replayable and easy to show friends as a VR selling point. It’s possibly not worth the laborious effort in getting to that point, however.

Iron Man VR does not justify being a full-length game. 6/10.