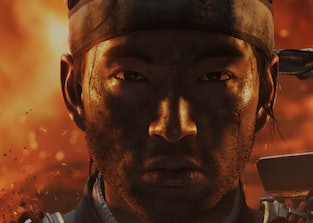 The PS5 is right around the corner, lurking in the holiday 2020 window with new features, backward compatibility, and perhaps even Spider-Man 2. But while we wait for the next-gen consoles to hit store shelves, the PS4 isn’t done just yet. 2020 is poised to double as the console’s swan song and perhaps its biggest-ever year, with exclusives like The Last of Us Part II and Ghost of Tsushima leading the way, along with a formidable roster of third-party games like Doom Eternal, Marvel's Avengers and Final Fantasy VII Remake.

The PlayStation 4 exclusive acts as a prequel to the original Nioh. Developed by Team Ninja (of Ninja Gaiden and Dead or Alive fame), the game bathes in all that fuedal-era Dark Souls goodness we just can't get enough of. In Nioh 2, you’re going to be cutting down various Yokai (folkloric monsters) and Demons using a variety of swords.

Unlike the first game, where you played as William, you will now use a fully customizable unnamed character. Best of all, you can even transform into a Yokai this time around. There’s nothing sweeter than becoming one of the monsters you’re supposed to be slaying.

From our experience demoing the game, we can tell you Doom Eternal is shaping up to be a must-buy on at least one platform. The Doom franchise has become like Mission: Impossible films: by all appearances, they should be terrible, but once you’ve dipped your toes into the experience, they quickly become some of the most gripping and action-packed pieces around. Soon enough, you’re humming the heavy metal songs in your sleep. Hum with us and try out Doom Eternal.

Persona 5 was a game so nice, Atlus plans to sell it twice. Royal is a re-release of the original game with a boatload of new additions. The JRPG has added a third semester, rounding out a full calendar year to extend beyond vanilla P5’s truncated timeline. There are new Confidants, locations, activities, plot lines, and more dating sim/RPG hijinks. The re-release also comes packed with every bit of DLC from the original, so whether you’re a returning player or brand new to Persona 5, this game is worth keeping an eye on.

The PS4 exclusive also acts as a primer for another P5 follow-up that's a full-on sequel: Persona 5 Scramble, releasing later this year for Switch.

The horror classic first debuted way back in the PS1 heyday of 1999, and now it’s back with a full remake and all sorts of modern whips and jingles. Featuring new graphics, weapons, controls, camera perspectives, and a built-in multiplayer mode, Resident Evil 3 Remake looks to one of the best horror titles this year. On the heels of the runaway success of the RE2 remake last year, know you'll be able to follow Jill Valentine as she navigates the horrors created by biotech meddling. In addition to PS4, RE3R will be released on PC and Xbox One.

If Resident Evil 3 revolutionized horror games, Final Fantasy VII was the granddaddy of modern JRPGs. The original game holds a special place in the hearts of millions owing to its sweeping scale and epic story. The remake has given us ample reason to doubt its necessity, but most of us will seize any excuse to trudge back into Midgard.

The PlayStation 4 exclusive’s updated graphics, brand-new opening, real-time combat, and the episodic release means you'll be able to sink your teeth back into this dazzling world for many years to come.

If you love Japanese games, it’s got all kinds of stuff you'll probably adore. The Sakura Wars cast was personally designed by Tite Kubo, creator of the landmark anime Bleach. If steampunk is your jam, Sakura Wars almost exclusively features a steampunk setting with giant robots. If you enjoy dating hijinks, like in Persona, then Sakura Wars has that too!

Give this one a shot. It’s not the franchise’s fault that Sega only released the fifth game in America.

It’s rare to find a title like Last of Us Part II, where we truly know very little about the story or mechanics prior to release. Given the original’s status as one of the most critically acclaimed titles of all time, it’s difficult not to be excited by Joel and Ellie's return.

If you haven’t played the original, please pick it up for PS4: you won’t be disappointed. The horror-adventure series made waves as possibly one of the very few universally loved titles around. From what we’ve seen, lightning is going to strike twice for developer Naughty Dog with this one.

You may know Sucker Punch as the folks behind the PS2’s Sly Cooper franchise or the multi-generational super-hero franchise Infamous, and now they’re making a samurai game called Ghost of Tsushima. It’s their first release since 2014, and the open-world environments of medieval Japan game look stunning. The game removes HUDs to create a more immersive narrative.

Ghost of Tsushima will encourage players to explore, crafting their own story as a samurai. Combat will be somewhat slow-paced, but will forground benefits to being stealthy, such as a multi-takedown move. The game will also feature Dual Language audio at launch, allowing players to enjoy the game in Japanese if they choose. Notably, the Japanese cast is led by Kazuya Nakai, who you may know as Roronoa Zoro from the anime One Piece.

For the last decade, the Avengers have been all the rage with the MCU. So a game like this has been a long time coming — and it’s totally worth it the wait. From what we played at NYCC, this game slaps. The combat is varied enough to keep anyone engaged, drawing from multiple popular titles over the last decade, and featuring characters that so many people love.

Although there won’t be couch co-op, the online experience looks exciting and varied. You can play as various avengers with up to four of your friends. The initial narrative seems to focus on the nefarious group called AIM and one popular villain that is a big surprise, but the developers at Crystal Dynamics have every intention of expanding this universe in the years ahead. Either way, this will be a game you’ll want to keep up with. It might even feel like the next Destiny in more ways than one.

CDPR drew an ample crowd when they released the intricately detailed Witcher 3 in May 2015. With Cyberpunk 2077, the developer looks to double-down on that sense of immersion with a fully customizable world. The whole thing takes place in a cyberpunk future called Night City, and you will quite literally shape the world around you, which means this might be the most choice-driven game in history. This makes sense, given that it’s based on a tabletop game. In this first-person RPG, you’ll have space to customize your guns, appearance, and allies. (I just want to customize my clock so it’s September already.)

Outriders looks simply amazing. Developed by People Can Fly, the folks behind Epic’s one-off but frequently re-released Bulletstorm, Outriders looks like a mix between Anthem and Destiny, with hardcore vibes akin to Gears of War.

Outriders is a third-person co-op shooter combining grounded, realistic environments that you might find in the Battlefield franchise with foes and weaponry that would be at home in Halo or X-Com. The unlikely pairing makes for a game that Inverse thinks could easily slay other sci-fi shooters like Anthem or Destiny occupying the same live-service space in gaming. Outriders will also come to PS5 this holiday season.