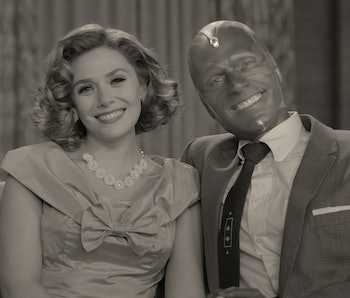 This article about the series WandaVision was originally published on January 7, 2020 and updated on June 18, 2021 following the release of the season on Disney+. Read on for the original article, with some new changes to reflect the latest updates on this topic.

The Marvel Cinematic Universe is expanding. Eight new Marvel shows have come or are coming Disney+, and the first was be WandaVision. Described as "bonkers" by star Paul Bettany, WandaVision was unlike anything you've seen in the MCU. But what is WandaVision? What is it all about? And why is it so... weird?

Here’s everything we know about WandaVision.

When is the release date for WandaVision on Disney+?

WandaVision premiered on Disney+ on January 15, 2021. The show was comprised of nine episodes, airing weekly.

WandaVision is a new show set in the Marvel Cinematic Universe, set after the events of 2019's Avengers: Endgame. It was also the first in a new slate of Marvel TV shows for Disney+.

The action series The Falcon and the Winter Soldier was originally meant to stream on Disney+ first in August 2020. But the COVID-19 pandemic delayed production, which took place in Europe near the first outbreaks in Italy. WandaVision, shot in enclosed sound stages in Los Angeles, managed to continue and finish filming during the pandemic.

Although Wanda/Scarlet Witch (Elizabeth Olsen) is back from the brink thanks to the Avengers, Vision (Paul Bettany) is still dead from the hands of Thanos in 2018's Avengers: Infinity War. Because Vision died before Thanos "snapped" half the universe away, Vision did not return with Wanda in Avengers: Endgame. WandaVision is about how Wanda gets Vision back in the MCU.

What is the plot and story of WandaVision?

WandaVision is about Wanda and Vision living an idyllic suburban life after the events of Avengers: Endgame. But as their picture-perfect life — which eerily resembles decades of TV sitcoms — is soon disrupted when they realize not all is what they seem.

Initially, the series starts as pitch-perfect spoofs of sitcoms from across the years. But as more people and things enter from the outside world, the cracks begin to show in this world, much to Wanda’s chagrin. WandaVision reveals hell hath no fury like a Scarlet Witch scorned, and it’s up in the air who is the one to use her incredible chaos magic for their benefit.

Is there a trailer for WandaVision?

Yes, there are several! A full trailer premiered during the 2020 Emmy Awards on September 20, giving Marvel fans a full look at what's to come. You can watch the trailer in the YouTube embed below.

The second full-length trailer, embedded below, gives us a bit more action and a little bit more background as to Monica Rambeau's (Teyonah Parrius) arrival in the reality.

The latest WandaVision trailer, uploaded January 4, 2020 and titled "New Era," teases that WandaVision will have multiple "theme songs," riffing on the evolution of TV sitcoms.

The very "first" WandaVision trailer came as a 30-second spot during the 2020 Super Bowl. The teaser also included footage of The Falcon and the Winter Soldier and Loki. This commercial first revealed the show's sitcom setups with a notable disruption of a modern-day Wanda moving in slow motion. You can watch the Super Bowl spot in the embed below.

Who is starring in WandaVision?

WandaVision stars Elizabeth Olsen and Paul Bettany reprising their roles of Wanda/Scarlet Witch and Vision, respectively. The actors first debuted as their characters in the 2015 film Avengers: Age of Ultron. (Olsen made a non-speaking appearance as Wanda in the post-credits of 2014's Captain America: The Winter Soldier.)

Joining the cast of WandaVision are:

Why does WandaVision look so weird but also familiar?

As opposed to a typical superhero show, WandaVision evokes the aesthetics of the classic multi-camera American sitcom. WandaVision intentionally looks like Marvel's spin on classic shows like I Love Lucy, The Brady Bunch, Full House, and other memorable sitcoms about the evolving American nuclear family.

A lot of WandaVision pays tribute to the acclaimed 2016 comic book series The Vision. Written by Tom King, the series tells the story of Vision creating a family for himself and attempting to live an idyllic life in a Washington D.C. suburb. The Vision introduced the characters Vin and Viv Vision, Vision's children. You can buy and read Tom King's Vision here.

At D23 in August 2019, Kevin Feige described the show as part “classic sitcom," part “Marvel epic.” In an interview with Variety in April 2019, Elizabeth Olsen implied the series would take place in a 1950s-inspired setting.

How many episodes are in WandaVision?

WandaVision had nine episodes. The show was first confirmed for six episodes, but on January 4, Marvel Studios confirmed that the show would have three more.

What is the Doctor Strange connection?

While all shows and movies in the Marvel Cinematic Universe inhabit the same continuity, WandaVision directly links to the Doctor Strange film sequel, Doctor Strange in the Multiverse of Madness, which will hit theaters in 2022. Though many were expecting the Sorceror Supreme to make an appearance in the series, this more so seemed to be a prologue for the film. The final scene of WandaVision shows Wanda secluding herself in the mountains, studying the grimoire that is meant to teach her more chaos magic. If anything, the series has set up a more depressed yet volatile Scarlet Witch for Doctor Strange in the Multiverse of Madness.

How does WandaVision tie into the MCU?

Marvel's Kevin Feige confirmed in November 2019 that fans would have to watch the Disney+ Marvel shows to keep up with the MCU, implying TV and movies will be more connected going forward. At Comic-Con 2019, it was confirmed Olsen would appear as Scarlet Witch in Doctor Strange in the Multiverse of Madness. As mentioned above, WandaVision, at the very least, sets the board for how broken—and dangerous—Wanda Maximoff is as she enters the multiverse.

But another WandaVision character will also be appearing in future movies. Teyonah Parris’ Monica Rambeau was announced to appear in The Marvels, the upcoming sequel to Captain Marvel. Having just received powers of energy manipulation and encountering her old friend Carol Danvers after her mother’s recent death, there’s certainly a lot left on the table for Monica.

Does WandaVision tie into other Disney+ Marvel shows?

At the moment, it's unclear how the other Disney+ Marvel shows will connect. Marvel has been very clear about the connections between WandaVision and Doctor Strange in the Multiverse of Madness, and there are very obvious associations with shows like Ms. Marvel (to Captain Marvel), She-Hulk (to the Hulk), and Loki (to the Thor franchise).

But it doesn't seem to be a hard-and-fast rule that every new Marvel show on Disney+ will lead into another movie. Historically speaking, the MCU has long-loved dropping Easter eggs and references to events in this universe, so it's not unthinkable WandaVision has hinted at what's going on across the rest of the MCU.

Will there be a WandaVision Season 2?

As this is the first MCU Disney+ TV series, a natural question from fans is whether things would continue past the first season. But given the way things ended for Wanda and Vision, it seems like the story of WandaVision is done. Indeed, series director Matt Shakman said there were no plans for Season 2 and that the idea would only be discussed if there was an idea worthy of continuing the series.

WandaVision is currently streaming on Disney+.

More like this
Entertainment
Feb. 3, 2023
Marvel just revived its primate assassin — What to know about Hit-Monkey
By Mónica Marie Zorrilla
Entertainment
Jan. 25, 2023
The MCU could bring back a hero from its most underrated TV show
By Dais Johnston
Entertainment
Jan. 27, 2023
The Last of Us Season 2 Renewal: Everything We Know So Far
By Eric Francisco
LEARN SOMETHING NEW EVERY DAY.