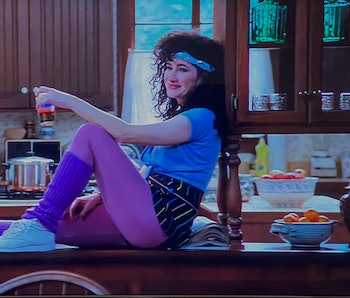 WandaVision's biggest stars are the two Avengers whose names make up the title of the show itself, but there's plenty more star power in the Marvel Cinematic Universe's first (?) Disney+ series. Case in point, Kathryn Hahn shows up in the new WandaVision trailer (released during the Emmy awards) and fans are already wondering what character she plays. The answer may lie in an old set photo leak, which lines up perfectly with her perplexing appearance in this trailer.

Warning! Possible spoilers ahead for WandaVision.

The trailer for WandaVision begins in black and white as Elizabeth Olsen and Paul Bettany appear to be living out some sort of '50s era TV sitcom as a regular married couple. However, Wanda (aka, the Scarlet Witch) soon realizes something is off and they break out of their black and white world into a technicolor montage of television history. (Hahn appears several times in this section as both a black and white sitcom neighbor and again in an extremely '80s outfit.)

These details have been teased before, but what comes next is even weirder. Vision seemingly escapes whatever simulation of mirror universe they're being held in and breaks into the real world, where he encounters Kathryn Hahn, who appears to be dressed as a witch in a black robe and pointy hat.

Bettany: No! Why would you think that?

Hahn: Because you are.

Who does Kathryn Hahn play in WandaVision?

If you're scratching your head trying to figure out who Kathryn Hahn is playing we're pretty sure we have the answer. She's the Marvel comics witch, Agatha Harkness. (Hahn is officially credited as playing the "nosy neighbor," but that seems like a pretty clear misdirection from Disney. And the fact that she knows Vision is dead suggests she's more than just some local rando.)

Who is Agatha Harkness in WandaVision?

Inverse first speculated that Hahn could be Agatha after leaked set photos showed her character being burnt at the stake. From there, a bit of comic book research confirmed that the one witch in the Marvel universe with a history that overlaps with Wanda's is Harkness.

They're shared stories include Agatha training Wanda as a witch before later appearing to her protege as an incorporeal projection. The Scarlet Witch uses the energy from this second encounter to become pregnant (weird, we know) but it's later revealed that her twin children are actually shards of the demon Mephisto (again, weird) who reincorporates them (triple weird). [Side note: this may also explain what's going on with Wanda and Vision's kids in that one scene from the trailer.]

If you want to read more about Agatha Harkness and her overlapping story with Scarlet Witch here's our original WandaVision theory. For now, take this as confirmation that Kathryn Hahn's character really is a witch, but what else that reveals about the show's plot remains to be seen.

When is the WandaVision release date on Disney+?

WandaVision is "coming soon" to Disney+ according to the trailer, and expected in December 2020.