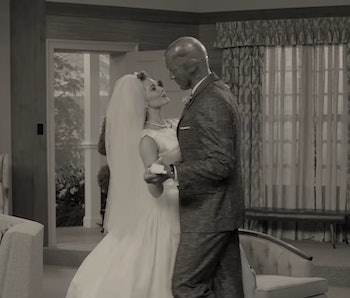 Marvel released a teaser for three new Disney+ series during the Super Bowl: The Falcon and the Winter Soldier, Loki, and WandaVision. While the first two looked like standard Marvel fare, WandaVision gave us a look at Wanda and Vision’s future through the icons of television’s past. While their share of screen time was relatively short, the visuals were rich enough to see where the inspiration came from.

Here’s six classic family sitcoms from the 60s, 70s, and 90s that clearly shaped the aesthetics of the upcoming Disney+ show.

The black-and-white sections of the trailer harken back to the 50s and early 60s, the earliest days of the medium, and fittingly show the beginning of Wanda and Vision’s relationship. We see them dancing in their living room with Wanda in a wedding dress. The living room is open concept, with a sunken conversation area. It’s an almost identical layout to the living room of Rob and Laura Petrie in The Dick Van Dyke Show.

2. Leave It to Beaver

Wanda’s costuming in the black-and-white sections references one of the best-known sitcom families: the Cleavers from Leave it to Beaver. June Cleaver, the matriarch, epitomized the idea of a 1950s housewife. Using her as inspiration for Wanda’s bucolic newlywed days is a no-brainer.

While there’s only a small glimpse of Wanda in her comic-accurate Scarlet Witch costume, there are enough clues to pinpoint the reference: the volume and soft curls of her hair are very mid-sixties, and the staircase looks similar to the one in Bewitched, with an arched entryway to the left. This reference makes sense, as Scarlet Witch got her start in the sixties, and Bewitched is, after all, about a witch.

A handful of quick cuts show a pregnant Wanda, with a straight hairstyle and a tunic top – a clear shift to the 70s. Judging from the “open” staircase and brick wall seen behind her, it looks like this era takes inspiration from The Brady Bunch. In the show, Mike Brady made a living as an architect, so the Brady home had many trendy 70s interior choices, like the exposed brick and the avocado accents in the kitchen.

The first evidence of the Vision family’s kids are shown in clips with a heavy 90s aesthetic. The kitchen where we see Wanda in a cropped flannel is very reminiscent of Roseanne, particularly the small floral motif wallpaper.

Wanda’s hair gets bigger in these scenes, her costuming expands to include soft pinks and flannels. The living room where the new parents are shown with the twins’ bassinets looks similar to that of the Tanners’ in Full House.

WandaVision looks like it will take full advantage of its new Disney+ series format, making it a must-see not only for Marvel fans but also for anyone looking for a hit of nostalgia: the era-spanning framework means anyone can relive the shows of their childhood in this age of streaming.

WandaVision comes to Disney+ sometime in 2020.