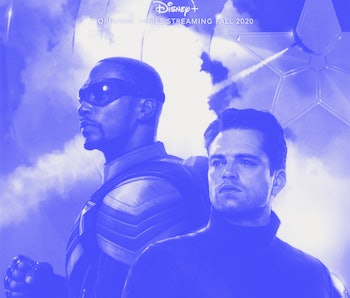 During the 2020 Super Bowl, the first trailer Marvel's Disney+ lineup officially debuted, revealing not just one but three new shows coming to the streaming service. We got pretty decent looks at The Falcon and the Winter Soldier (Fall 2020) and WandaVision (sometime in 2020). Plus, a very brief look at Loki, which is still slated for spring 2021 — though if filming is already underway perhaps it's been moved up.

Here's everything we learned in the first official trailer for The Falcon and the Winter Soldier, WandaVision, and Loki.

First, if you haven't already, check out the trailer. It's awesome. Take your time. Watch it twice if you want. We'll be here waiting once you're ready to unpack what Marvel just revealed.

The entire thirty-second clip opens on Sam Wilson (Falcon) practicing with Captain America's shield. He's clearly still getting a hang on how to use the thing, and it's probably not easy without Steve Rogers' super-strength. (Remind us again why Bucky Barnes isn't the new Cap?) In another shot, Sam uses his Falcon wings, so he's not giving those up entirely just yet.

Overall, the vibe here seems to be Winter Soldier-style spy thriller, complete with lots of hard cuts, bullets falling, and military agents jumping out of fighter jets. We also get a brief look at Bucky along with our returning villain Baron Zemo from Civil War.

A final shot shows what looks like Captain America taking part in a football halftime show, but based on previous leaks we're pretty sure that's actually U.S. Agent. Played here by Wyatt Russel, U.S. Agent is a government-controlled replacement for Cap (sorry Sam) who will almost certainly turn out to be a villain.

What the WandaVision trailer reveals about the plot

In short, not much. The only dialogue we get is Vision saying "Wanda, welcome home," which makes me think this takes place in the afterlife, or at least on some other plane of existence. After all, Vision is dead, right?

We get multiple quick cuts of Scarlet Witch in lots of different costumes, including her original supersuit from the comics. Some of the imagery is in black and white, some is in color, some is a little bit of both. The entire thing is totally mysterious and tantalizing.

What the Loki trailer reveals about the plot

More than you might think! We only got a very brief look at the trickster god Loki, who's seemingly locked up in some sort of holding cell and wearing what looks a bit like a prison uniform. Despite his predicament, he seems confident as he says, "I'm gonna burn this place to the ground."

What is Loki talking about? A closer look at his uniform reveals what looks like the letters TVA, which could be short for Time Variance Authority, an organization in the Marvel comics devoted to maintaining the timeline and stopping anyone who would tamper with it.

Considering how Loki escaped in Endgame with the Tesseract, which can seemingly transport him through space and time, it makes sense that he'd wind up in trouble with the TVA. The question is: How did he get caught and what will he do next?

That's all for now, but check-in tomorrow and later this week for deeper dives into all three Disney+ Marvel shows. Until then, here's that trailer again for your re-watching pleasure.