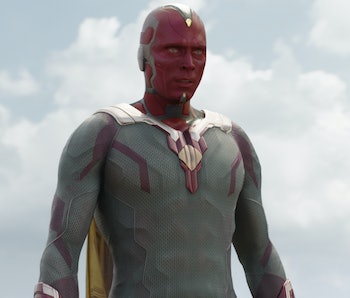 For a massive franchise like Marvel, it's a hard thing to believe it when actors swears that the new thing they're doing is actually, truly new. Even breakout movies like Black Panther and Thor: Ragnarok still felt like, well, Marvel movies. But Paul Bettany (Vision) is out here talking up the upcoming Disney+ series WandaVision as "fucking bonkers," and, well, color us intrigued. Do tell more, Paul.

On Sunday, IMDb held a Q&A at the annual Sundance Film Festival with the cast and crew of Uncle Frank. Among the film's cast is Bettany, who gave a little peek into the new Marvel series on Disney+, WandaVision, where he's set to reprise his role as The Vision. The series is expected to premiere later in 2020.

As Bettany told IMDB (via IMDB's Instagram stories), "It is fucking bonkers. I mean it's, it's so out there and nuts." He then added, "Fans won't have to wait that much longer. They'll get much more of an insight very, very soon."

Not for nothing but, Super Bowl LIV is happening in just a few days. That seems like the perfect time to drop a ridiculous teaser for WandaVision, a show fans are expecting to be something truly wild and ridiculous.

While Bettany is vague in that same, maddening way most actors are when they're subject to legally-binding non-disclosure agreements, his words are still worth ruminating over when it comes to the mysterious WandaVision. In fact, Bettany's quotes seem to confirm my own theories about what WandaVision is all about.

Based on what little we know, the series will star Bettany and Elizabeth Olsen back in their roles of the Vision and Wanda/Scarlet Witch in the aftermath of Avengers: Endgame. Because Vision was killed by Thanos in Avengers: Infinity War, and because Wanda has supernatural powers even she doesn't totally understand, and because the film is expected to have significant ties to the 2021 film Doctor Strange in the Multiverse of Madness, WandaVision is looking like it will take place in some sub-dimension where Wanda sees a false, idyllic life with Vision; one that mimics a 1950s sitcom.

Concept art further supports this kind of premise, or at least something similar. In the first image Marvel gave fans at D23 Expo last August, an illustrated Wanda and Vision appear looking like characters from a '50s family sitcom with darkened, shadowy silhouettes of their comic book counterparts behind them. Later in December, at CCXP in Brazil, Marvel released another early image of WandaVision, this time of Olsen and Bettany on a black and white sitcom set.

Set leaks from the Atlanta set of WandaVision also show the series will introduce S.W.O.R.D., an extra-terrestrial counterpart of the Earth defense organization S.H.I.E.LD. (Because S.H.I.E.L.D. is virtually defunct in the MCU, S.W.O.R.D. may take its place.) This decidedly un-sitcom element indicates the false nature of WandaVision's central imagery.

We should be clear that this is just speculation on our part, but based on all these existing evidence, this has to be the premise of WandaVision. Unless, of course, the showrunners have something truly, totally "bonkers" planned that even we can't guess.

For now, fans will just have to take Bettany at his word.

WandaVision will air on Disney+ sometime in 2020.

More like this
Entertainment
Jan. 25, 2023
The MCU could bring back a hero from its most underrated TV show
By Dais Johnston
Entertainment
Feb. 3, 2023
Marvel just revived its primate assassin — What to know about Hit-Monkey
By Mónica Marie Zorrilla
Entertainment
16 hours ago
Ant-Man 4 Comment Debunks a Dark Rumor About Quantumania's Ending
By Eric Francisco
LEARN SOMETHING NEW EVERY DAY.
Related Tags
Share: