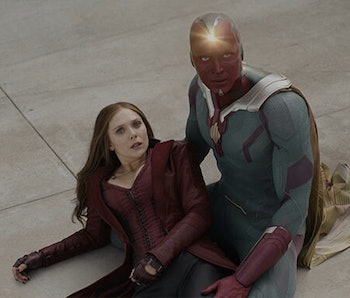 When Doctor Strange returns in 2021, in Doctor Strange in the Multiverse of Madness, it will be without director Scott Derrickson. Furthermore, the exit of the Sorcerer Supreme’s first director may say something about the sequel’s tone, and maybe even its ties to WandaVision on Disney+.

Citing “creative differences” with Marvel Studios, director Scott Derrickson announced on Twitter late Thursday (following a story by Variety) that he has left work on 2021’s Doctor Strange in the Multiverse of Madness, a sequel to 2016’s Doctor Strange. Derrickson will remain as executive producer, though the creative reigns of the film will be handed to someone else.

“Marvel and I have mutually agreed to part ways on Doctor Strange: In the Multiverse of Madness due to creative differences,” Derrickson tweeted. “I am thankful for our collaboration and will remain on as EP.”

Marvel has not yet announced a new director. As reported by Variety, filming is still on track to commence this May.

Derrickson’s exit suggests several key things about the film, a project Marvel seems intent on playing an important role in “Phase 4” and beyond. First, the film is confirmed to have pronounced ties to the experimental Disney+ series WandaVision. Exactly what those ties will be are unknown to the public, but it is understood that knowledge of that show’s plot and twists are necessary to understand Multiverse of Madness. In short, one must watch WandaVision before watching Doctor Strange in the Multiverse of Madness.

It’s impossible to guess how Derrickson may have felt about tying his Marvel “horror” movie (more on that later) to a Disney+ show. The matter could be a non-issue between Derrickson and Marvel, or it could be everything. In December, Derrickson cryptically tweeted frustration towards studio-mandated release dates as being “the enemy of art.” No other context was given, which can only imply the matter was close to Derrickson’s work at Marvel.

Shortly after Derrickson announced his departure, Reddit compiled a list of tweets that further suggested Derrickson’s frustrations with Marvel. In one, dated Christmas Eve, Derrickson revealed he met Star Wars: The Last Jedi director Rian Johnson just a few days earlier. Johnson “took time out of his vacation to talk with me at length about a personal situation I’m dealing with.”

Best as we can guess, Derrickson seemed frustrated the release of Doctor Strange in the Multiverse of Madness was so locked to June 2021, leaving little room for Derrickson to include potentially big ideas. The film’s June release date also factors into WandaVision, as the show’s premiere was — until recently — scheduled to lead directly to the theatrical release of Multiverse of Madness.

If Derrickson can’t make “art” out of Multiverse of Madness, one can guess it was due to WandaVision already in place (filming is underway) which means Multiverse was locked into June 2021. What Derrickson wanted to do that would jeopardize the film’s release is unclear, but it seems big enough to cause a rift between himself and Marvel Studios.

With Derrickson now gone from Multiverse of Madness beyond his EP credit, it seems Marvel will have exactly the ties to WandaVision it wants. And those ties only exist because of Disney+, the risky enterprise that so far seems to be paying off thanks to the viral popularity of The Mandalorian. Maybe Derrickson is onto something when he says the bottom line is a threat to art.

Further complications may be Derrickson himself. An acclaimed horror director who cemented his voice through films like 2005’s The Exorcism of Emily Rose and 2012’s Sinister, his 2016 Marvel movie Doctor Strange was a departure from his usual style. As a paint-by-numbers Marvel origin story with a dash of psychedelic tie-dye, Doctor Strange felt like a necessary evil for Derrickson, but the sequel could have seen the director unleashed.

When Multiverse of Madness was unveiled at Comic-Con last July, Derrickson touted the film as “the first scary” movie in the MCU, leading to conclusions it would be Marvel’s first horror movie. (The New Mutants, acquired through the Disney/Fox merger, was still in limbo.) Months later at a panel for the New York Film Academy, Marvel Studios’ Kevin Feige clarified the movie isn’t “necessarily” horror, but “a big MCU film with scary sequences in it.”

“It’s fun to be scared in that way, and not a horrific, torturous way,” Feige said at NYFA, citing Steven Spielberg movies like Raiders of the Lost Ark and Temple of Doom, “but a way that is legitimately scary because Scott Derrickson is quite good at that, but scary in the service of an exhilarating emotion.”

Like WandaVision, it’s unknown whether Derrickson and Feige were on the same page regarding Multiverse’s tone. But one can guess that the two definitely clashed over what constitutes a horror movie, what doesn’t, and how it can be done within the Marvel umbrella. For now, and possibly forever, no one will actually know for sure whether those risks would have been rewarded.

Doctor Strange in the Multiverse of Madness will release in theaters on May 7, 2021.