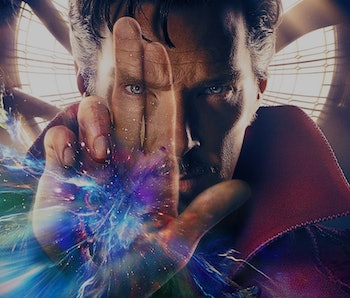 The Sorcerer Supreme is about to go mad, and he won’t do it alone. At San Diego Comic-Con, Marvel Studios’ Kevin Feige revealed one (of several) Phase 4 announcements: A full-blown sequel to 2016’s Doctor Strange, titled Doctor Strange in the Multiverse of Madness, which will be released in theaters on March 25, 2022.

Just because Mysterio said the multiverse wasn’t real, doesn’t mean it actually wasn’t. What’s even more mad: The film will have direct ties into the Disney+ series, WandaVision.

At the fabled Hall H at San Diego Comic-Con on Sunday, shortly after revealing Shang-Chi and the Legend of the Ten Rings, Kevin Feige unveiled Doctor Strange in the Multiverse of Madness. The film will be a sequel to 2016’s Doctor Strange, and is expected to again star Benedict Cumberbatch.

More compellingly, the film is expected to have direct ties to the Disney+ series WandaVision, the Disney series starring Elisabeth Olsen and Paul Bettany reprising their roles as Wanda and Vision.

Director Scott Derrickson, who returns to the director’s chair from the first film, said the film will be more horror than other Marvel movies, “but it’s also PG-13.” Prior to Marvel, Derrickson was a horror director, having helmed 2012’s Sinister and 2014’s Deliver Us From Evil.

Exactly how WandaVision will tie into Doctor Strange in the Multiverse of Madness remains to be seen. But WandaVision had its brief reveals just before Doctor Strange, which revealed 1) it will take place after Avengers: Endgame, and 2) Monica Rambeau, who held the mantle of Captain Marvel before Carol Danvers, will be featured as an adult in the series played by Tiana Paris. In Captain Marvel, an 11-year-old Maria Rambeau was played by Akira Akbar.

The film, as expected by its title, will explore the Marvel multiverse. The concept of parallel realities will be further explored in the Marvel animated series What If?, a new Disney+ series based on the comic book series that explored alternate “What If?” events.

The series will be narrated by Jeffrey Wright (Westworld), who will play Uatu the Watcher, a role previously assumed to belong to Stan Lee. What If? will also feature many returning Marvel actors reprising their roles via voice-over.

Doctor Strange in the Multiverse of Madness, WandaVision, now What If? — Marvel Studios is multiverse crazy at Comic-Con this year. And it’s only just begun.

Doctor Strange in the Multiverse of Madness will be released in theaters on March 25, 2022

This article has been updated to reflect Disney's decision to delay the film due to the 2020 coronavirus pandemic.