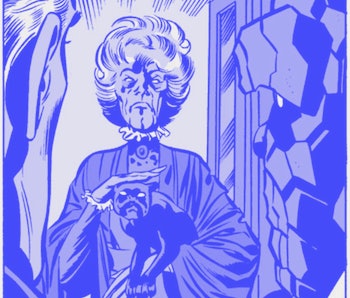 WandaVision's trippy plot remains mostly a mystery to audiences, and speculation has been running rampant, picking apart the scant seconds from the Superbowl ad. However, the original Avengers comics combined with recent set photos may reveal the true purpose of a character we know will play a major role.

So far, six characters have been confirmed to appear in all six episodes of WandaVision. Only one has yet to be named: Kathryn Hahn, whose role is described only as "a nosy neighbor." While this sitcom trope fits well with the tone of the show, set photos reveal there's far more to it than that.

In set photos leaked in December, Hahn appears to be dressed in colonial-era clothes and tied to a stake. That sounds an awful lot like the Salem Witch trials, which would make Kathryn Hahn's character a witch. The only honest-to-goodness witch Wanda Maximoff has met is Agatha Harkness. Here's a little history on her and what her inclusion could mean for the WandaVision family.

Who is Agatha Harkness, and how could she tie into WandaVision on Disney+?

Agatha Harkness made her Marvel comics debut in 1974 in Fantastic Four Vol. 1 #94. Sue Storm and Reed Richards choose Agatha as a governess for their son Franklin. However, when they show up at her place to drop him off, the Four are attacked by The Wizard and Sandman. They are defeated by Agatha and her cat Ebony... all without waking the baby.

On their way out of Agatha's castle, The Thing notices a book about the Salem Witch Trials, and begins to connect the dots. Agatha neither confirms or denies she was involved, but later helped the Fantastic Four in their various adventures using her powers. She also assisted young Franklin as his powers emerged. But that wasn't her most powerful pupil...

Agatha crossed over into Avengers comics later in 1974, in issue #128. Upon meeting Scarlet Witch, she resigns as her role as governess to train Wanda. This tutelage continues, and eventually the mentor/mentee relationship grows into a close bond.

The most interesting storyline, and the one that is most likely to hold the clue to Hahn's role in WandaVision, begins with Agatha's death. She is burned at the stake by the residents of New Salem, similar to the leaked set photos.

This prompted Scarlet Witch to challenge The Salem Seven, but there was collateral damage. While trying to diffuse the Seven's energies, the entire town was destroyed. However, a familiar voice returned to offer some advice.

Wanda uses this energy to become pregnant with twins, similar to the twins hinted at in the WandaVision promos. However, all is not how it seems. Agatha returns inexplicably, four years later, with heartbreaking information: Wanda's twin boys weren't hers at all. They were actually shards of Mephisto, who reabsorbed them. Agatha was left with no choice but to erase all memories of them from Wanda's mind to ease her pain.

What does this mean for WandaVision? If Kathryn Hahn is playing Agatha Harkness, this could assure Wanda solace if her children, like the twin boys in the comics, are not truly "hers." The memory-erasing could also provide an easy in to weave the events of WandaVision back into the MCU with little or no fallout. With Hahn's character still unconfirmed, it's safe to bet the character name would be a spoiler, if Wanda's nosy neighbor truly is her long-lost mentor.

WandaVision premieres on Disney+ in December 2020.