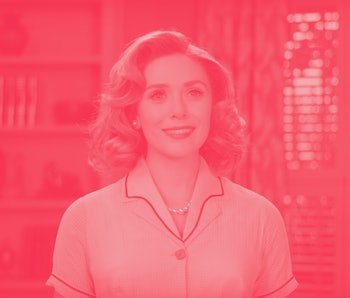 If it isn't already clear from the trippy trailer, the WandaVision is taking serious inspiration from one of the best Marvel Comics stories in years — and several recent set photos prove it.

Over the weekend, JustJared shared new paparazzi photos from the set of WandaVision. The photos show actors Teyonah Parris and Randall Park as the characters Monica Rambeau, an agent of S.W.O.R.D., and FBI Agent Jimmy Woo, dressed in their agency's windbreakers as they meet local police of a town called "Eastview." There hasn't ever been an "Eastview" in the Marvel Cinematic Universe, but there is a real hamlet called Eastview in New York, a state with plenty of Marvel history.

WandaVision will be Parris' debut in the MCU, as she plays the character Monica Rambeau who fought aliens as Captain Marvel before Carol Danvers. The show will be Park's second appearance as Jimmy Woo, after the 2018 heist film Ant-Man and The Wasp.

WandaVision does not yet have a release date on Disney+ beyond a promised December 2020 premiere.

Free of context, the photos look like nothing special. With two federal agents meeting cops from a local sheriff's office, these pictures make WandaVision look more like a procedural network drama than a streaming show from the Marvel franchise. But the presence of local police hints that the show will in some way involve a crime, and it just so happens that The Vision by Tom King completely hinges on a murder.

It's like Twin Peaks, but Marvel. As we've explained before, The Vision by Tom King, published in 2016, is a Marvel Comics series in which Vision engineers himself a family with two kids in suburban Virginia. As he tries to lead an idyllic suburban life, things go awry when a brutal murder upends those domestic ambitions. The series was an acclaimed hit for Marvel and took the Eisner Award for "Best Limited Series" in 2017.

Promotional materials for WandaVision, going all the way back to its reveal at San Diego Comic-Con 2019, hinted the show would be a spiritual adaptation of The Vision. Like the comic, WandaVision appeared to take place in a comfy American suburb with Wanda (Elizabeth Olsen) and Vision (Paul Bettany) dressed like characters in a 1950s sitcom. Subsequent photos and trailers revealed a different identity for WandaVision, showing homages to decades of TV comedies and a secondary setting in "reality" with the inclusion of S.W.O.R.D., a space intelligence counterpart to S.H.I.E.L.D. But references to The Vision also continued, with speculation that Wanda and Vision's children in the series could be Viv and Vin, two characters introduced in Tom King's comic book series.

While WandaVision will not be a complete adaptation of The Vision (the fact that it's predominantly starring Wanda is enough to differentiate it from the comics, where Wanda didn't appear), it will evoke enough elements from it to make the comic a serious point of reference. Luckily, it's very easy to catch up.

WandaVision will stream on Disney+ in December 2020.