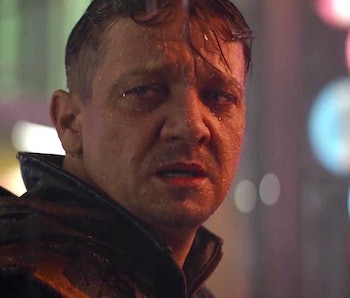 The Falcon and the Winter Soldier filmed in Prague and Atlanta, with set photos revealing that Sam Wilson and Bucky Barnes may also find their way to the fictional island of Madripoor. Now, an intriguing new leak reveals an Avengers: Endgame connection that could shed some light on a throwaway scene from the film and the future of Marvel's Cinematic Universe.

In the five years following Infinity War, Clint Barton shed his superhero persona as Hawkeye and transformed into the deadly Ronin, a samurai-wielding vigilante who went after international criminals (while seemingly ignoring the stateside ones) as revenge. Before rejoining the Avengers in Endgame, Black Widow found Clint in Japan, battling several members of the Yakuza before killing their boss, Akihiko.

An IMDb leak (via Reddit) reveals that the Yakuza could be making a reappearance in the third episode of The Falcon and the Winter Soldier. Two actors are listed as portraying members of the Yakuza, one of whom is a stunt person who’s classified as a “Yakuza bike rider.”

Knowing that Clint killed a Yakuza boss in Endgame, it’s possible that Sam Wilson and Bucky Barnes will be facing the wrath of the Yakuza gang. After all, the Japanese mob probably wants revenge on the Avengers for what happened to Akihiko and could track down the Falcon and the Winter Soldier as a way to get to Clint.

It’s also possible (and a bit more likely) that Baron Zemo is affiliated with these villains. In the comics, Zemo is married to Heike (aka, Baroness Zemo and a known Nazi). The Baroness funded several criminal organizations across Europe before hiring the Yakuza to steal hallucinogenic crystals from Osborn Industries. She planned to use the crystals to induce global fear and mass hysteria so that she and the Nazis could more easily stage a takeover.

The Inverse Analysis — The Yakuza are no strangers to the MCU. Agents of S.H.I.E.L.D. and Daredevil have both referenced the gang, while a couple of the Yakuza members show up in the sixth episode of Iron Fist’s first season. With all that in mind, the Yakuza are long overdue for a more formal introduction. There aren’t that many plot details out yet for The Falcon and the Winter Soldier, but it’s possible the Yakuza may be connected to leather jacket-clad members of a crime syndicate seen in set photos.

In addition, the Yakuza’s inclusion is likely the biggest clue that they’re somehow affiliated with whatever Baron Zemo has planned. It’s possible that The Falcon and the Winter Soldier will also expand on Clint's revenge-fueled mission in Endgame, tying up the smaller subplots from the film on the Disney+ show with more depth. Or maybe it will establish the Yakuza as a serious enemy who could show up again in a future Marvel movie.

Whatever the case may be, it’s high time that the Yakuza got more than a cameo appearance.

The Falcon and the Winter Soldier is expected to release on Disney+ in 2021.