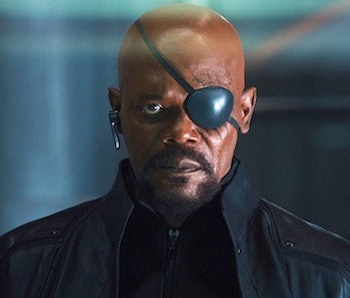 In late 2019, A Falcon and Winter Soldier set photo revealed Bucky Barnes and Sam Wilson might visit Madripoor, the fictional Southeast Asian island from Marvel comics. Back then, the image of the Madripoor flag felt more like an Easter egg connecting the Marvel Cinematic Universe to the X-Men instead of something relevant for future storylines. However, new set leaks from the Disney+ series reveal more about Madripoor and a unique Nick Fury connection.

Murphy’s Multiverse recently posted a slew of new images from the set of Falcon and Winter Soldier. The photos — taken at the Atlanta set prior to production shutdowns — offer a more detailed glimpse at Madripoor. The set design and production details alone hint that the fictional island’s presence on the show would be more than just a nod to the comics. Described as a “place for the very rich and the very poor,” the city of Madripoor is most notable for being a haven to Wolverine and the X-Men. The new photos seem to reveal several businesses from an impoverished neighborhood called Lowtown.

Stinger has direct ties to Nick Fury and was one of S.H.I.E.L.D. director’s safe houses during the Secret Warriors comic book storyline, which centered Fury and the several secret teams that he put together to fight Hydra. We know that the show filmed scenes in the Czech Republic and was also set to film in Puerto Rico before an earthquake hit the island in January. With all that in mind, it’s possible Sam, Bucky, and even Zemo are running from the government and head to Madripoor to hide out in Fury’s safe house.

Perhaps Fury brings them together to fight or infiltrate Hydra, or will simply provide them a safe haven. Since little is known about the full plot of the show, it's unclear how Madripoor will tie in just yet.

From what we can tell, The Falcon and the Winter Soldier seems to be setting up a lot of subplots that could become important to the MCU’s overall storylines for Phase Four. So, including Madripoor in the Disney+ series offers a clever way to introduce a variety of characters from Marvel comics who could later appear and become central to several storylines throughout the MCU.

The Falcon and the Winter Soldier is scheduled to premiere in August on Disney+.