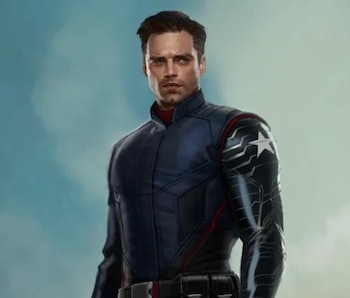 Pandemic-related shutdowns have affected the production schedule of hundreds of films and TV shows. Disney's Marvel film slate is looking far different than it did just a couple of months ago. However, the Disney+ schedule of Marvel shows has remained relatively untouched, implying that WandaVision, The Falcon and the Winter Soldier, and Loki were still on track to be completed as scheduled.

While The Falcon and the Winter Soldier seemed particularly close to wrapping up filming, a recent update from star Sebastian Stan suggests the Marvel series wasn't quite as far into production as we thought.

Disney has overhauled its entire movie release schedule due to the coronavirus pandemic, pushing back Marvel films like Black Widow, The Eternals, and Doctor Strange in the Multiverse of Madness by several months, as it seems unlikely we'll see crowds packed into a movie theater any time soon. Filming for The Falcon and the Winter Soldier began last October and production was widely rumored to be a week away from wrapping. In an interview with The Hollywood Reporter, Stan said the show wasn't that close to completion.

“No, we were probably at least two or three, but don’t quote me on that,” the actor said.

This is likely due to the fact that the pandemic isn’t the first production delay the Disney+ series has faced this year. In January, The Falcon and the Winter Soldier was gearing up to film for two weeks in Puerto Rico, but a 6.4 magnitude earthquake hit the island, preventing the cast and crew from filming as planned. In early March, the series was scheduled to shoot in Prague for a week, but the pandemic scuppered those plans as well. The film crew then headed back to Atlanta to carry on before having to fully suspend filming later that week.

There’s no official word on when production is set to pick back up again. Speaking with Muscle & Fitness in late March, Stan conceded that he had no idea when the show would be completed, but that they had gotten “far enough.”

“It’s not really at the forefront of my mind. You know, we were lucky to get far enough. We haven’t finished. The plan is to go back whenever we can, whenever that might be, to finish. Whenever we can turn this thing around and people can get back together, we can pick back up, but I just don’t know at this point.”

Disney and Marvel are likely waiting to see how the next couple weeks play out before officially shifting the show's release date. Perhaps the weekly release format will even allow the production team time to finish working on the later episodes of the show while the first couple of episodes air as scheduled.

Even if filming were to pick back up in early summer, we don't know which episode they were filming when the shutdowns happened or if they were filming the episodes in order. If The Falcon and the Winter Soldier wasn't done shooting the pilot, it's possible that the show's premiere date will be pushed back by at least a month or two whether we like it or not.

The Falcon and the Winter Soldier is scheduled to premiere on Disney+ in August.