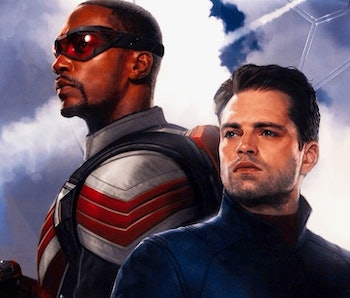 Production shutdowns have thrown Marvel’s Disney+ line-up into disarray, delaying the previously scheduled release dates for The Falcon and the Winter Soldier, WandaVision, and Loki. While Disney’s Marvel entire movie schedule has been pushed back by several months, a leaked press release from Disney+ France may reveal how these delayed MCU shows (and a few others like Moon Knight) could factor into revamped plans for the Marvel Cinematic Universe.

According to a leaked presentation from Disney+ France (shared MCU Cosmic), both The Falcon and the Winter Soldier and WandaVision are still slated to premiere in 2020. Loki and What If... ? are listed as launching in 2021. Meanwhile, Hawkeye is apparently scheduled for 2022, along with She-Hulk, Ms. Marvel, and Moon Knight.

Now, it’s completely possible that this presentation was meant to be a part of the industry event that was planned ahead of the European launch of Disney+ in March. The event was ultimately canceled due to Covid-19, but it was speculated that Disney would unveil footage from the Marvel’s Disney+ lineup to bolster excitement. That said, if these dates were set prior to the production shutdowns, it’s also possible there have been recent changes made to all previously scheduled releases.

With all that in mind, it’s hard to imagine that these dates won’t be reshuffled, especially since Marvel’s film slate has been reworked to shift the release dates of Black Widow, The Eternals, and Doctor Strange in the Multiverse of Madness. These release date changes crucially impact the Disney+ series because of how interconnected they are to the grand scheme of the MCU.

For example, Doctor Strange 2 was originally scheduled for a May 2021 release, but is now set for November. WandaVision and Loki were meant to precede the film and play heavily into its main plot, so it’s possible their respective release dates will also shift to accommodate the sequel's move to late 2021. Should production start up again by, say, June, there’s still a chance WandaVision will remain on the schedule for a late 2020 release, with Loki debuting in the spring as planned.

If WandaVision actually releases this year and Doctor Strange 2 doesn't arrive until 2022, that raises some big questions about how the two stories will connect. (The Disney+ show is supposed to lead into the Doctor Strange sequel, with Wanda appearing in both.) Maybe they won't be so connected after all — especially given all the turnover on Doctor Strange 2.

Considering that television arguably works on a faster timetable than movies, the Disney+ shows face more complications due to their stringent MCU attachments. Either way, given all the fluctuating release dates and relative unknowns, it’s best to expect that the Disney+ shows will also face delays and release closer to their MCU counterparts. Until there is official confirmation, however, all we can do is wait.