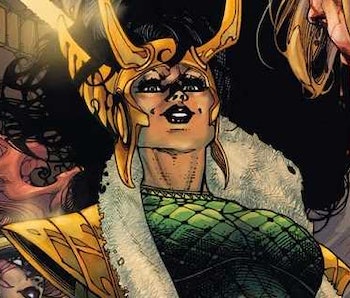 Fans might have to wait a while for Loki to premiere on Disney+, but there is plenty of speculation about the show's storyline to chew on in the interim. The Super Bowl TV spot revealed the god of mischief would cross paths with the Time Variance Authority, an organization tasked with protecting the timeline and the multiverse. All the way back in November, Loki cast Sophia Di Martino in an undisclosed role. Now, a brand-new set leak reveals that she’s likely playing Lady Loki. What does that mean for the show? Let's dissect.

Warning! Speculative spoilers ahead for Loki.

New photos of Di Martino suggest she is not playing the long-speculated character of Enchantress. Rather, she’ll be suiting up as Lady Loki. Reddit user Csparkles123 posted an image of the actor on-set in costume, alongside an older image of Loki.

Their two outfits are nearly identical, right down to the sparkly golden chest plates. Lady Loki’s involvement in the Disney+ series is an interesting twist and gives us some new insights about the plot.

In the comics, Lady Loki is a female version of the beloved trickster god, and also one of the most notable of Loki’s shape-shifting forms. During the events of Ragnarok, Loki is reborn as a woman. More specifically, he inhabited the form of Lady Sif, Thor’s lover, whose spirit was trapped elsewhere. What’s more, Loki’s female form is influenced by Norse mythology, where the trickster god once shapeshifted into an elderly woman named Thökk. In the comics, they are the same person, so Lady Loki has all of the same powers and backstory.

In the MCU, Loki is obviously a shapeshifter, having transformed into Scarlet Witch, Captain America, Odin, and many more. We know the Loki series follows the god of mischief through multiple timelines and universes, so it’s possible that this new Lady Loki is simply an alternate timeline version of the Loki we know.

While there’s a chance that the trickster god has simply shapeshifted into Lady Loki, Tom Hiddleston was on set around the same time as Di Martino, which seems to imply that they are two separate iterations of the same character. Perhaps the two will work together to stir up trouble throughout the multiverse, but only time will tell.

In addition to all that, an IMDb leak reveals that Cailey Fleming has allegedly joined the cast in the role of “Young Sylvie,” indicating that Enchantress might be much younger than we initially thought. How are Enchantress and Lady Loki connected?

Turns out, Young Sylvie appeared in the Dark Reign comic book storyline alongside Lady Loki. In this storyline, Loki bestows Enchantress with her powers. With that in mind, it’s possible Enchantress will be introduced in much the same way in Loki and both trickster gods will form an alliance with Young Sylvie. Whatever the case, it’s an interesting development and one that offers a fresh twist on what we already know about the series.

Loki will be available to stream on Disney+ in 2021.