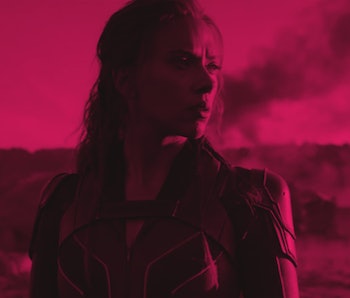 Black Widow met an untimely and tragic end halfway through Avengers: Endgame, sacrificing herself on Vormir so that Hawkeye could retrieve the Soul Stone. Hulk later volunteered to wear the Infinity Gauntlet to counteract the effects of Thanos’ snap, but was unable to bring Natasha back. In addition to bringing back the dusted, Hulk also attempted to resurrect Black Widow. However, he was positive she wasn’t among the revived afterwards. A thoughtful new theory suggests that Hulk's certainty on the matter stemmed from having glimpsed her inside the Soul Stone.

The inner workings of the Soul Stone and its mysterious red world remains a mystery. What we do know about it is based on two specific events in the MCU. During Infinity War, Thanos was sent to the world inside the Soul Stone immediately following the snap that dusted half of the world’s population. While there, he saw the person he loved the most, a young Gamora.

A deleted Endgame scene, called “Directors Commentary: Tony at The Way Station,” confirms the same thing happened to Iron Man. Following his Infinity Gauntlet snap, Tony entered the Soul Stone and briefly conversed with daughter Morgan, who all but confirms his death. With that in mind, we can assume that Black Widow's inside the world of the Soul Stone, too.

Reddit user Crispworthy suggests Hulk actually experienced the same Soul Stone trip and came face-to-face with the deceased Natasha. If we’re to assume the Soul Stone only allows interaction between those who shared a close bond, it makes perfect sense that Hulk saw his former teammate. After all, he and Black Widow have a long history. They shared a brief romantic connection and she was the first to recruit him to join the Avengers.

Hulk was devastated by her death, visibly angry to the point that he threw a bench off a pier. The theory would also explain why Hulk was positive Black Widow didn’t return with the others, even though no one ever checked Vormir. It’s possible that Hulk tried to convince Natasha to return to the land of the living and she refused.

Conversely, she may have been unable to leave the Soul Stone because her sacrifice was permanent. Either way, Hulk definitely wanted to revive Black Widow at the time he wielded the Infinity Gauntlet, so it’s highly likely that she would be the one to greet him in the aftermath of his snap.

Unfortunately, Endgame didn’t offer much in the way of closure following Black Widow’s death, marking her passing with only a brief scene between the remaining team members before quickly moving on. A Soul Stone scene between the Hulk and Black Widow would have been a more fitting tribute to her sacrifice.

We may never know what Hulk actually saw, if anything at all, but the idea that he had one final conversation with Black Widow is a satisfying one.