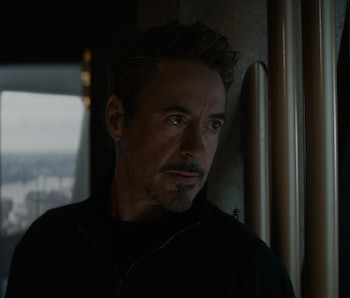 The finale of Avengers: Endgame hinges upon Tony Stark’s sacrifice. Without it, Thanos would have continued to reign supreme. In fact, he would have had access to the Infinity Stones far earlier, thanks to the Avengers accidentally alerting the Mad Titan to time travel. Instead, Iron Man saved half of the universe’s population and destroyed Thanos once and for all. However, a deleted Endgame scene between Tony and his daughter Morgan seems to hint that Tony may have second-guessed his sacrifice.

Prior to the release of Avengers: Endgame, 13 Reasons Why star Katherine Langford had been cast in an undisclosed role. The casting confused fans at the time, especially since she never actually appeared in the film. It was only after Endgame’s theatrical release that it was revealed she’d been cast to play the teenage version of Morgan Stark, though her scene never made it into the final cut. It did, however, make its way over to the newly launched Disney+.

The deleted scene, titled “Director’s Commentary: Tony at The Way Station,” takes place inside the Soul Stone after Tony’s Infinity Gauntlet snap. The deleted scene is around two minutes long and Morgan all but confirms Tony’s death, which is something he’s not aware of upon seeing her. In a moment of weakness and distress, Tony questions his decision that led to his death. It seems this brief glimpse of the grown version of Morgan made all the difference.

“I think I might have made a bad decision. I’m scared I made a mistake,” Tony says. Morgan assures him that he didn’t; his sacrifice, though “sad,” meant the survival of billions, including her. It’s a touching scene that ends with Tony hugging Morgan and reiterating that he loves her 3,000.

The Soul Stone’s metaphysical space was last seen in Avengers: Infinity War after Thanos’ snap. While there, the Mad Titan briefly chatted with the younger version of his daughter, Gamora. It seems directors Anthony and Joe Russo were going for the same thing in Endgame with Tony. Whereas Gamora remorsefully tells Thanos that he’d completed his mission at the cost of “everything,” Morgan is thankful for her father’s decision, even if means growing up without him.

It’s hard not to wonder what the Avengers: Endgame finale might’ve been like if Tony had decided to reverse his decision to wear the Infinity Gauntlet. Would someone else have sacrificed themselves? It’s possible, but considering that the Soul Stone seems like the place to go following enormous, life-changing decisions, Tony’s fate was already sealed.

The deleted scene from Avengers: Endgame is now available to stream on Disney+.