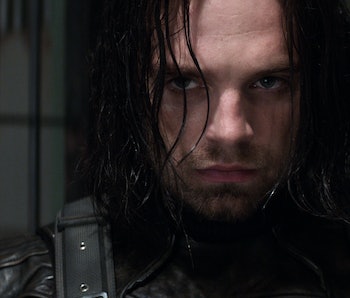 The Falcon and the Winter Soldier seems to be setting up a lot of intriguing twists for its six-episode run on Disney+. Thanks to the Super Bowl TV spot, we know Baron Zemo is back for a second go-around with Bucky Barnes. However, this week's footage leaks may point to an unexpected power shift between the enemies.

Warning! Potential spoilers ahead for The Falcon and the Winter Soldier.

Although Captain America: Civil War largely stripped away Baron Helmut Zemo's supervillain status, The Falcon and the Winter Soldier may find a way to rectify the situation — with a twist. Recent set photos imply Zemo might be formulating his evil plans inside a castle lair, and new footage from the Disney+ series indicates that he's scheming alone.

Disney held a shareholders meeting this week, complete with clips from their latest slate of projects, which of course included The Falcon and the Winter Soldier. A leaked description of the footage (via ComicBook.com) reveals that Bucky and Baron Zemo might be putting their differences aside in order to form an alliance. Even more interesting: Bucky is the one to initiate contact with Zemo to suggest the team-up, and for a rather surprising reason. Here’s what the description reads:

The Falcon and The Winter Soldier footage opens with Bucky (Sebastian Stan) visiting Zemo (Daniel Brühl) in an elaborate prison. Zemo tries to activate Bucky’s Winter Soldier programming, which of course no longer works. Bucky reveals that he has come to see Zemo because someone has restarted the Super Soldier program. The next clip shown is a rally with a heavy Americana theme (red, white, and blue decorations, cheerleaders, the works). An announcer is introducing the new Captain America to the world, and we see a figure with the shield standing backstage draped in silhouette. An action-packed montage is then shown, which showcases the action stunt work and battles that will take place in the series. This includes Zemo fighting in his Marvel Comics mask. As Bucky points out, the two men are not friends; they’re two guys who had a mutual friend (Steve Rogers) and now need to help one another.

It’s a safe bet to assume that the scene in question takes place early on in the series, considering the villain is clearly a free man in other shots. With all that in mind, it’s possible that Bucky is responsible for breaking Baron Zemo out of prison, doing so to stop whoever’s behind the revived Super Soldier Serum initiative. The fact that Bucky asks Zemo for help, however, may change the power dynamics between the two, especially if Zemo can no longer control Bucky’s programming as he did during Civil War. With Bucky seemingly in charge of the anti-Super Soldier Serum operation and Zemo potentially serving as backup, the Baron may not be the primary big bad of the series after all.

What’s more, the description also aligns with a previous leak explaining why Sam Wilson is still not suiting up as Captain America in the Disney+ series. As the story goes, Sam will be offered the chance to keep the mantle of Captain America on the condition that he undergo the procedure to become a Super Soldier. It’s very possible that Bucky’s alliance with Zemo will cause tension between him and Sam, especially if they are torn on their serum policy.

To top it all off, yet another set video leak appears to show Bucky working alongside U.S. Agent, with Sam nowhere to be seen. The Falcon and the Winter Soldier could be gearing up to open a permanent rift between Sam and Bucky. While that would be a devastating blow, it won’t be very long before we get to see how it’ll play out.

The Falcon and the Winter Soldier is set to premiere on Disney+ in August.