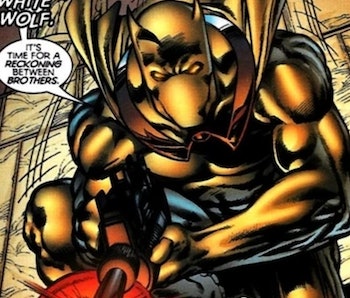 With the recent Super Bowl teaser trailer, anticipation is building for Marvel's upcoming Disney+ show The Falcon and Winter Soldier. The cast are hyping up the series as well, and a recent photo shared by Sebastian Stan is stirring speculation Wakanda could be involved in the plot.

The image, posted on the actor's Instagram story and captured by reddit user LuckySpade13, shows street art with two messages: the slightly obscured bottom text seems to read "brake the mask," a probable reference to Baron Zemo. The top text, however, is much more clear: White Wolf.

We've heard this name before: in the Black Panther post-credits scene, when Bucky Barnes wakes up in a hut in Wakanda and the local children call him "White Wolf." So there are obvious Wakandan ties to the graffiti. But what do we know about this mysterious White Wolf?

In the comics, White Wolf is the adopted son of T'Chaka and adopted elder brother of T'Challa, brought into the family when his parents died in a plane crash. He's jealous of the attention T'Challa received, and eventually became the leader of the Hatut Zeraze, the kingdom's secret police. It was at this point he took the name White Wolf.

T'Challa vehemently opposed the purpose of the Hatut Zeraze, and disbanded them when he became king, leaving Hunter to convert the force to mercenaries. His costume is similar to Black Panther's, with the same protective qualities, the only difference being the color.

While none of this ties directly to Bucky Barnes, the connection for a potential composite character isn't difficult to see. The relationship between T'Challa and Hunter has all the family drama of Thor and Loki, with the complex moral dilemmas of Captain America and The Winter Soldier. Even after being basically fired by his own baby brother, Hunter remained somewhat loyal to Wakanda, rushing to its aid whenever needed.

The resonance of the name is still in question, but we could see Bucky fighting alongside Wakandans, utilizing the Wakandan training he received from Shuri after the post-credits scene, earning him the nickname amongst the populus, or even a Bucky equipped with Wakandan technology after his stay there.

This also opens up the possibility of cameos. The safest bet appears to be Shuri, as she is said to love fixing "broken white boys" in Black Panther. As Bucky spent a considerable time with her, a "follow up" would be interesting to see against the backdrop of his adventures with Falcon. Even if White Wolf isn't directly related to Wakanda in the Marvel Universe, this leak provides an interesting expansion to the lore we've been given so far.

The Falcon and The Winter Soldier will premiere on Disney+ in August 2020.