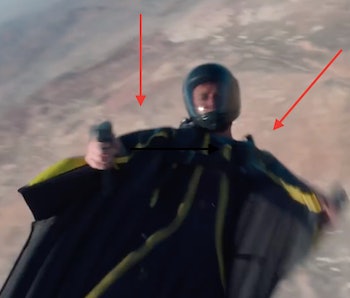 Fans tuning into Super Bowl LIV game were offered a sneak peek at the upcoming slate of Marvel’s Disney+ series, including The Falcon and the Winter Soldier, WandaVision, and Loki. Though the teaser trailer lasted all of 30 seconds, there were plenty of new images for fans to pore over. We already knew Baron Zemo will be back as a villain in The Falcon and the Winter Soldier and Bucky Barnes confronts him in the teaser. However, upon a closer look, it seems the trailer hints at the return of another MCU staple, the authoritarian organization Hydra.

In a "blink and you’ll miss it" moment from the “Big Game Spot” trailer, Sam Wilson looks like he’s in hot pursuit of a group of armed and helmeted base-jumpers. It’s unclear who these people are and why Falcon is after them, but a closer look at the jumpers’ suits reveals that they could be members of Hydra. The implication comes from the color of their suits. While it’s hard to tell whether the outfits are a dark green or black, the bright yellow stripes on their arms and legs are hard to miss and they’re incredibly reminiscent of Hydra soldiers’ green and yellow outfits from the comics. Compare the costumes below.

It's not exact, but it's very close. Hydra was last seen when the Avengers time-traveled back to 2012 in Avengers: Endgame, but they haven’t had a major role in the MCU for a while… or so we thought. The villainous organization has a tendency to keep going, even if that means keeping to the shadows or working under a different name. For example, there were plenty of Hydra agents working within S.H.I.E.L.D. during Captain America: The Winter Soldier and that could be the case in The Falcon and the Winter Soldier.

After all, the organization is usually associated with Captain America, dating all the way back to when Cap fought them in World War II. Since The Falcon and the Winter Soldier stars the superheroes’ BFFs, it’s possible Sam and Bucky have discovered a covert Hydra mission and are tasked to stop it.Perhaps it’s even Hydra that introduces John Walker/U.S. Agent to the masses, putting Steve Rogers’ counterpart in place as a sleeper agent. After all, U.S. Agent did start off as a villain in the comics and it’s possible that he’s being manipulated by Hydra in the Disney+ series.

In previous set photos, the flag of Madripoor was spotted on location. While Madripoor teases a connection to the X-Men, the fictional country is also known for being a major base of operations for Hydra. At one point, the island was taken over by the terrorist organization and led by Madame Hydra. So, it’s possible Madripoor, Hydra, and the base-jumpers are far more connected than previously thought. It can’t be a coincidence, right? Either way, as The Falcon and the Winter Soldier’s release date draws closer, the puzzle pieces are falling more clearly into place.

The Falcon and the Winter Soldier will premiere on Disney+ at some point in 2020.