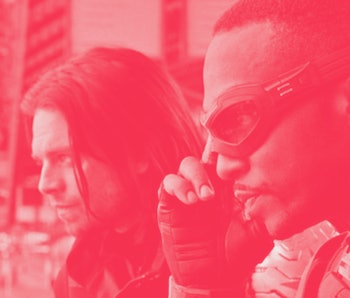 Steve Rogers should watch his back because there’s a new Captain America in town. While Avengers: Endgame saw the first Avenger travel back in time to live out his days with Peggy Carter, the upcoming Disney+ series The Falcon and the Winter Soldier is bringing Captain America back in a major way — just not in the one fans would expect. We already know that Wyatt Russell’s U.S. Agent is being molded as the next superhero and new set photos reveal the first real look at this Captain America imposter.

When the first details for The Falcon and the Winter Soldier were released, fans wondered why Sam Wilson was back to using his old code name and costume. After all, Steve Rogers had officially passed along his mantle and shield to Sam at the end of Endgame. So why go back to Falcon? The answer might lie in U.S. Agent’s role in the Disney+ series.

Recent Falcon and the Winter Soldier set photos show Wyatt Russell in a military uniform, wearing a sling on his arm, and standing on the steps of what looks to be a government building. In other photos, he’s donning his U.S. Agent costume, complete with a knock-off of Captain America’s mighty shield. The costume is incredibly similar to that of Cap’s first suit, but there’s a stark difference. U.S. Agent’s outfit includes a gun holster, which is something Cap never needed (except for the first movie when he was fighting literal Nazis in WWII). Take a look at the set photos below!

U.S. Agent’s Falcon and the Winter Soldier garb also bears a resemblance to the costume he wears in the comics, but with notable differences. In the comics, U.S. Agent — who was first introduced in Captain America #323 as the government-backed supervillain SuperPatriot — also wears a blue suit.

However, the costume’s chest area is more obviously meant as a reflection of the American flag’s white and red stripes. Whereas the live-action suit has just three red stripes across the front. Check out the comic book version below to compare.

Though we don’t know much about the show’s plot details, it’s possible that U.S. Agent starts off a villain like his comic book counterpart before becoming an ally to Sam Wilson and Bucky Barnes. It’s clear from the set photos and concept art that U.S. Agent is meant as a replacement for Captain America.

One previous leak even suggested that the government would refuse to acknowledge Sam as Captain America and decide to back U.S. Agent as the new American hero instead. Whether or not U.S. Agent is meant as an antagonist remains to be seen, but The Falcon and the Winter Soldier is already shaping up to be a fascinating take on the post-Endgame MCU.

The Falcon and the Winter Soldier is set to premiere in late 2020 on Disney+.