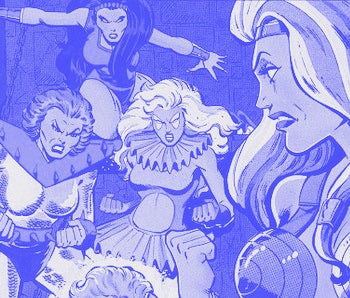 The Falcon and the Winter Soldier set leaks keep offering up new twists and surprises. Previous footage revealed Bucky Barnes would team up with the potentially villainous U.S. Agent to save a truck full of people, with the set video suggesting a shocking alliance between the pair. Now, several new set videos expand upon who exactly Bucky and U.S. Agent were rescuing. They also give us a glimpse of an eclectic supervillain team.

Warning! Speculative spoilers ahead for The Falcon and the Winter Soldier.

Recently, Marvel fan site Murphy’s Multiverse got hold of several images and set videos that provide further context to the scene where Bucky and U.S. Agent’s fight against a common enemy. Per the leaks, the Disney+ show will involve a hostage situation taking place during New York’s 2023 G20 summit. Last held in Japan in 2019, this real-world event brings together world leaders with the aim of cultivating global economic sustainability.

In the scene, two armored vehicles drive down the street, presumably carrying the G20 members. It isn’t long before things take a turn. With the world's leaders inside, NYPD SWAT vehicles come to a halt and a group of four masked women run toward them. We know now that U.S. Agent was attempting to fight off these assailants while Bucky rescues the G20 members. The leak claims, U.S. Agent’s skills aren’t enough for this group of female assailants and he’s ultimately taken down. Afterwards, Bucky rushes over to help him, seemingly confirming they’re fighting on the same side. Watch the scene play out in the videos below!

While it’s unclear who these women are, we can make an educated guess: the Grapplers. In the comics, they were talented wrestlers. Led by Ann Fraley, aka Auntie Freeze, they decided to leave wrestling behind due to lousy pay compared to their male counterparts.

Auntie Freeze later encouraged four of her cohorts — Titiana, Screaming Mimi, Letha, and Poundcakes — to go to Power Broker to undergo treatment that gave them superpowers and they ultimately turned to a life of crime to make money.

Their potential involvement in The Falcon and the Winter Soldier certainly complicates things. It’s possible that they were hired by someone to find and kidnap the G20 leaders. While Bucky seems to have gotten them to safety, there’s no telling when they’ll be back to collect. It’s hard to tell from the videos how the Grapplers will connect to the larger plot, or if they’re simply around for one of the six episodes.

At one point in the comics, the Grapplers were contacted by Baron Zemo to join the Masters of Evil, so it’s a safe bet that they’re working for him in the Disney+ series too. Perhaps their arrival is the catalyst for Bucky, Sam, and U.S. Agent working together. We’ll have to wait until the summer to find out.

The Falcon and the Winter Soldier will premiere on Disney+ in August.