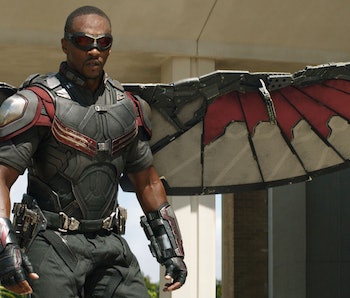 With filming underway for upcoming Disney+ series The Falcon and the Winter Soldier, set leaks are springing up left and right. From villain reveals to potential tie-ins with the larger cinematic universe, the particulars of Bucky and Sam's future adventures are coming into clearer focus. Two recent info drops from reputable Marvel sleuth Murphy's Multiverse shed even more light on the world surrounding our heroes.

One big clue shows us how the mere mortals of Phase 4 Earth are handling Post-"Blip" life. The resurrection of the population previously dusted by Thanos in Infinity War should have been an absolute win for the Avengers, but logistically, it's a nightmare. Enter the Samson Corporation, a company first hinted at in a clip filmed in November. Seen in the video, the company motto "Rebuilding Your City After the Blip" gives a clear idea of where this new player figures into the planet's sudden infrastructure issues.

Infrastructure is surely the least interesting thing in the Marvel universe, but this recent leak shows how successful it's been for the Samson Corp: they're building a skyscraper headquarters. While the photos show only the beginning of construction, we may be seeing our first glimpse at an evil corporation hiding behind the benevolent public service it provides. Of course, Samson also might just serve as a backdrop for something different entirely, but dealing with how the average person lives post-Blip should prove an interesting angle for The Falcon and The Winter Soldier.

The other set leak is a bit more exotic. Far from the Marvel mainstay filming location in Atlanta, Georgia, The Falcon and the Winter Soldier is now filming in the Czech Republic. According to Murphy, they're taking advantage of the country's rich history by filming at the luxurious Ploskovice Castle, north of Prague. To fans, this means one thing: Baron Helmut Zemo. The Captain America: Civil War villain returns in the new series, and he'll be in need of a lair.

That's not the only possibility for Disney's overseas trip. Ploskovice Castle is about 300 years old and has housed the King of Bohemia, so it could be used for flashbacks, either in Zemo's childhood or historical events in his fictional homeland of Sokovia. No matter the use, viewers are in for a treat, as the interiors of the castle appear to be a Baroque fantasy, filled with the kind of opulence that screams "ultrarich supervillain." According to Murphy, the show has permission to film in the palace's grottos as well, which is sure to provide an eerie ambience to a scheming Baron.

As this new information gets us one step closer to solving the mystery surrounding The Falcon and the Winter Soldier, one thing is becoming increasingly apparent: the story could signal huge changes for Phase 4, both in establishing what the post-Blip world looks like and what the reappearance of Zemo means for the Marvel Cinematic Universe.

The Falcon and the Winter Soldier will premiere on Disney+ in August.