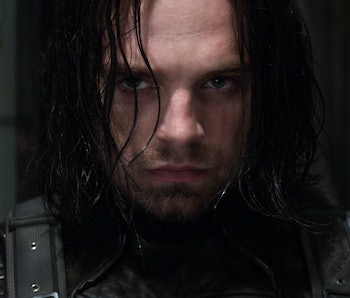 The Falcon and the Winter Soldier is shaping up to be a globe-trotting Marvel adventure. The Disney+ series was filming in Atlanta and Prague before production shut down in March. What's more, leaked photos later revealed that Bucky and Sam Wilson will head to the fictional island of Madripoor. Now, a new set leak could reveal a fascinating new villain for the show.

Murphy’s Multiverse recently shared a couple of photos from the set of The Falcon and the Winter Soldier. They show a man, presumably an extra on the show, wearing a black leather jacket with a sinister, red face on the back, hinting he's a member of a gang or crime syndicate.

This may be a big clue about the villain of the Disney+ show. It’s possible the symbol could represent Red Skull or Maggia, the nefarious international crime syndicate from the comics. Maggia has often been headed by Count Nefaria and his daughter Madame Masque, a supervillain who wore a mask to cover up her facial scar. Interestingly, the character already appeared in Season 2 of Agent Carter.

However, the most obvious choice for this red face is probably Mephisto, a demonic villain involved in the creation of the antihero Ghost Rider. Incredibly powerful and immortal, Mephisto played a key role in Marvel’s “Secret Wars” storyline, an arc that has been widely speculated to be a key inspiration behind Phases Four and Five of the MCU.

During this comic book crossover, Mephisto put together a supervillain team called the Legion Accursed. The jacket worn by the unknown character on set might be a nod to this group. It’s possible Mephisto will be introduced, or at least teased in The Falcon and the Winter Soldier, and then appear later in the MCU.

A previous fan theory speculated that Mephisto was behind Scarlet Witch’s sitcom-style situation in WandaVision. So, if Mephisto’s first appearance is scheduled for Falcon and Winter Soldier, it could potentially lead right into its Disney+ follow-up.

All that said, it’s possible that the Disney+ show will forego all these options and finally introduce the most fascinating villain of all: the Madripoor dragon. We already know the location will feature in The Falcon and the Winter Soldier, but many fans may not realize is that Madripoor isn’t a traditional island at all. It was unknowingly built on top of a sleeping dragon’s head. Whoops!

The dragon is massive, with red eyes and demonic features. The Madripoor dragon’s face isn’t red, but nothing in the live-action Marvel adaptations is an exact replica of the comics. Of course, it seems rather unrealistic for the Disney+ show to introduce one of the stranger aspects of the comics into The Falcon and the Winter Soldier, but until we know more about the plot and what role Madripoor will play on the show, anything is possible.

The Falcon and the Winter Soldier will premiere in August on Disney+.

More like this
Entertainment
14 hours ago
The MCU could bring back a hero from its most underrated TV show
By Dais Johnston
Entertainment
Jan. 13, 2023
Mike Colter would "entertain" the idea of coming back to Luke Cage
By Hoai-Tran Bui
Entertainment
Jan. 17, 2023
Guardians of the Galaxy 3's Adam Warlock reveal may be a big misdirect
By Eric Francisco
Related Tags
Share: