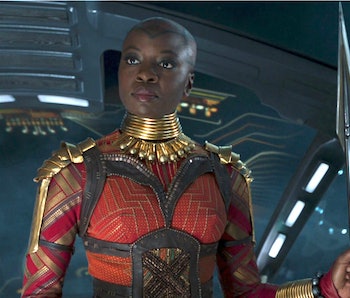 Following his father’s death in Captain America: Civil War, Black Panther let Baron Helmut Zemo off the hook from being tried in Wakanda. The villain is back and presumably up to no good in The Falcon and the Winter Soldier — the six-episode Marvel series coming to Disney+ — and some intriguing new IMDb leaks hint Wakanda may be a major player in the series, which may even set up the villain for Black Panther 2.

An IMDb leak (via Murphy’s Multiverse) suggests that more than one member of the Dora Milaje, Black Panther's powerful warrior army, will show up in the Disney+ show. According to the leak, several stunt actors — two of whom were doubles for the warrior leader Okoye in Black Panther, Infinity War, and Endgame — will appear on the show.

Murphy’s Multiverse also reports the stunt performers were on location when The Falcon and the Winter Soldier briefly filmed in Prague during early March. Daniel Bruhl also filmed scenes that included Zemo. That can't be a coincidence, right? It’s still unclear what role Wakanda will play in The Falcon and the Winter Soldier, but it’s possible the Dora Milaje are there to arrest Baron Zemo for his war crimes against their former king and compel him to stand trial.

More specifically, however, the leaks imply that Okoye herself might actually appear in the Disney+ show. After all, it’s doubtful that the Wakandan warriors will be there on their own, and Okoye is up-to-date about what’s been going on since Thanos’ snap. There may be an even bigger reason for Okoye to appear in the series: introducing Namor for Black Panther 2.

In Avengers: Endgame, Okoye was checking in with Black Widow regarding some underwater tremors. However, Okoye pretty much inferred that those tremors weren’t worth looking into and that they would go away if they ignored them. Fans have speculated that the film was teasing the introduction of Namor as Black Panther's next big bad.

In the comics, Namor is the mutant son of a sea captain and an Atlantean princess. Basically, he's Marvel's version of Aquaman. After initially working with Black Panther, Namor's relationship with the Wakandan king becomes contentious, prompting him to flood the nation. It's possible Okoye appears in The Falcon and the Winter Soldier to discreetly investigate these suspicious water tremors.

Perhaps she shows up under the guise of tracking down Zemo and then veers off to quell Namor's attempts to return ashore. Surely Bucky would be willing to help her and the rest of the warriors, considering that the Wakandans helped him recover after Civil War. Whatever the case may be, Okoye and the Dora Milaje's potential involvement in the Disney+ series may be the gateway to the next phase of the MCU.

The Falcon and the Winter Soldier will premiere in August on Disney+.