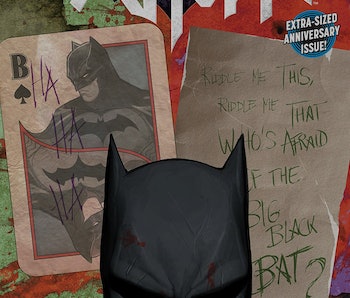 Tom King, a writer by trade, is speechless. It’s my fault. I’ve come to him on the Saturday of New York Comic Con, where the entire East Coast has packed the Javits Center on the far west side of Manhattan. It’s the busiest day of one of the biggest pop culture conventions of the year. And here, I’ve asked King an unwieldy question: “What have you learned about yourself after three years on Batman?”

I expected an honest answer. And soon, after a long pause, I get one. I just should have also known the answer would be quintessential Tom King.

“I was writing scared,” King tells Inverse. “I was scared out of my mind.”

"I want to make ‘Batman/Catwoman my ‘Dark Knight Returns’

This December, Tom King will end a three year stint on Batman, concluding with issue #85. But, King’s reign isn’t over. The author will continue his predominant Batman/Catwoman-centric storyline — including the pivotal moment where Catwoman left Batman at the altar in issue #50 — into a spin-off limited series, Batman/Catwoman, beginning in 2020. (James Tynion IV will take the Bat-baton, with Batman #86, also publishing in 2020.)

It’s in Batman/Catwoman where King is putting all his Bat-chips on the table. “I’m not saying I can do this,” he says, “But I want to make Batman/Catwoman my Dark Knight Returns. I want this to be the book that defines and redefines the character for a generation.”

Those are mighty goals for someone who admitted they were scared not so long ago. King continues, “I’ve done signings with Frank Miller. People come up to him with his books, saying, ‘This means something.’ I want people to pick up my Batman in 40 years and say, this means something.”

Tom King knows he can’t just make that happen. He knows because he’s tried. Three years ago in 2016, fresh off acclaim from books like The Sheriff of Babylon and The Vision (expected to influence the series WandaVision on Disney’s new streaming service), King was given the keys to DC’s crown jewel Batman — amidst a large-scale continuity reboot, “Rebirth,” no less.

In the beginning, King aimed high but found himself personally falling short.

“When I first got Batman, I was trying to write — I look at my first arc trying to be Frank Miller, a little bit Neal Adams. I could see I was writing scared. It was weird,” he says. “I was in a good point, I was writing Vision and Sheriff, things that were becoming movies and TV shows. But it wasn’t clicking.”

So, what changed? As King explains it, “It wasn’t until I threw that shit away and just embraced the joy of comics. That’s when Batman got good. I realized, comics were improvisation. They’re a deadline medium.”

“I know these characters inside and out, they feel like my friends.”

Originally planned to be 100 issues, DC announced this year that King’s Batman would end at issue 85. Reasons vary. Titanic obligations like writing the Warner Bros. film New Gods with Ava DuVernay, an original TV project States of America, and DC’s own plans for Batman resulted in King taking his story into a limited format, where he has a track record of excellence.

“There’s only so much original vision you can put into [an ongoing series],” King says. “It’s a joy. But because it has to come out every two weeks, the artists have to change so much. It’s a different kind of love. Now, what I did with Vision and Mister Miracle, I can do that with Batman and Catwoman. Take a deeper dive. Now that I know these characters inside and out, they feel like my friends. I have every opportunity to do a remarkable story.”

King has a lot of affection for Catwoman. In 2017, he told Inverse that the series was heavily based off his affections towards his own wife. “The biggest stakes for me are my relationship for her,” he said. “When I was in a dangerous situation in my former job, I was never scared of getting hurt. I was scared of her being without me. When you’re in love, you have these thoughts. It makes everything in your life different, it makes you admit things about yourself.”

“Someone wrote me on Twitter yelling at me. ‘I read your comics and all I see is your therapy sessions!’” King says. “I’m like, this is the greatest compliment. The whole point of writing, the point of art, of creating anything, is to reach inside of yourself and connect with an audience. Create an empathy machine that makes people relate to each other. If I don’t do that, it’s not going to be good.”

King would totally not treat Batman as his “therapy sessions” if it were up to him. “Dude, if I can write the most brilliant comic and not involve myself, and sell a ton and put my kids through college, I would. I don’t know how to do that. The only way I know how to write is to bleed into the page.”

Bleeding happens when you’re Batman. In Batman #62 by Tom King, the Dark Knight wakes up upside down, a prisoner of the brutal doctor, Professor Pyg. Capitalizing on Batman’s vulnerability, Pyg sticks a knife into his rib. “Good,” Batman tells himself. “He’s surrendered his weapon. All you’ve lost is blood.”

Back at Comic Con, Tom King pauses one more time, ruminating on the future. “That’s what I learned. Just not to be scared.”

Batman #86 will be released in December.