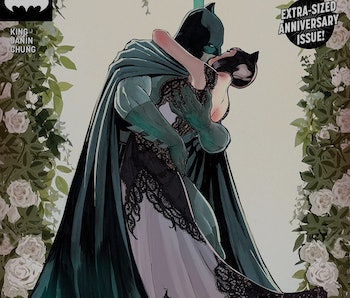 Since Tom King took over the reins of DC’s flagship Batman comic book series — simply titled Batman — two years ago, King has been working his way towards issue #50, the halfway mark of an epic 100-issue run.

But the events of Batman #50, which would have included a major game-changer in the life of Bruce Wayne, has been spoiled. And many people, including Tom King, are not happy.

Spoilers for Batman #50 ahead.

For those not keeping up on Batman, issue #50, set to come out on Wednesday, July 4, was to be the wedding of Batman and his sometimes enemy, sometimes lover, Catwoman. Inspired by King’s real marriage, the former CIA officer-turned-comics writer was in the midst of weaving together the highly anticipated finale to a comic book romance 70 years in the making. It’s such a big deal that the comic features dozens of A-list talent, including Frank Miller, Mitch Gerards, Becky Cloonan, Neal Adams, Hi-Fi, Lee Bermejo, and more contributing to the story.

Then, the twist ending was spoiled by the New York Times.

On Sunday, four days ahead of the comic’s release, the Times posted a “SPOILER FILLED” recap of Batman #50, which ends with Catwoman leaving Batman at the altar (on a Gotham City rooftop, because of course it is). The comic ties directly into Catwoman #1, a new series by Joëlle Jones that will also be released on July 4.

For fifty issues, King had the Bat and the Cat on adventures that redefined their relationship, from a fun double date with Clark Kent and Lois Lane (Batman #37) to a tempting “work trip” with Wonder Woman (Batman #40). And everyone from Booster Gold to the Joker gave presents.

But as the Times spoiled in its headline, it just wasn’t meant to be. As Catwoman explains in a letter to Batman in the issue, her marrying means Batman loses the fire that makes him go out and save Gotham City night after night. Marriages are all about sacrifices, and unfortunately for Batman, Catwoman’s “sacrifice” to him is, well, him.

This hasn’t sat well with readers, though the outrage seems to be divided, either at Tom King’s story or the premature spoiling for a comic destined to be a must-read. DC’s review embargo for Batman #50 (as well as its other comics coming out this week) was dated July 4, the day fans could actually get their hands on Batman #50. But whether it was the Times or DC publicity, the embargo was broken, and now the ending is out there.

King himself has tweeted about the issue, revealing he is “pissed” but still “excited” for fans to read it for themselves.

But King’s story is still drawing its share of criticism. Because even through major, world-shaking reboots that are ironically common in the Marvel and DC universes, there is always an inevitable return to a familiar status quo. The marriage of Batman and Catwoman seemed like one of the rare things that would stick for years, much like the death of Jean Grey or the death of Barry Allen. (Comics, like Shakespeare, are obsessed with death.) But Batman and Catwoman aren’t getting hitched, and fans are disappointed.

Compounding the problem is that Batman/Catwoman is actually the second superhero couple this year that comic book readers didn’t see the marriage they were promised. Earlier this year, longtime X-Men Colossus and Kitty Pryde were to be married in X-Men Gold #30, until Kitty got cold feet and phased through Colossus’ ring.

But Gold #30 still ended with a happy union anyway, with Rogue and Gambit tying the knot instead. Batman #50 does not have a “back-up” marriage, and even if it did, it still wasn’t the one readers were promised.

What’s more disappointing is that King’s Batman ranks with the all-time greats, even though it’s far from over. One would expect an ex-foreign intelligence officer to have a Batman that was all gadgets and espionage. Instead, King’s Batman has been deeply cerebral, emotional, and full of invention. (Who knew a D-list villain like Kite-Man could be a top-notch character?)

Along with artistic collaborators David Finch, Mikel Janin, and others, King has created a Batman entirely his own, where Batman is examining himself and his ability to be happy even when he’s pop culture’s most legendary brooder. This makes Batman #50, something of a disappointment, even if it’s actually a very good comic book on its own.

More like this
Entertainment
18 hours ago
Why Moon Knight’s head writer refused to “go toe to toe” with Batman
By Eric Francisco
Entertainment
5.10.2022 12:15 PM
47 years ago, Marvel turned its biggest failure into an unstoppable juggernaut
By Richard Newby
Gaming
5.19.2022 4:00 PM
MultiVersus could be the first Smash clone to truly challenge the throne
By Eric Francisco
Related Tags
Share: