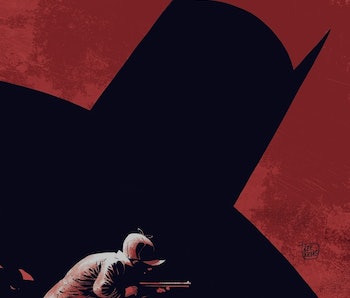 When Batman writer Tom King had a gap in his busy schedule, he told DC Comics top brass that he wanted to do a one-shot graphic novel that would “touch the heart of one character.” He wanted it to be his Killing Joke. Instead, co-publisher Dan DiDio had him write a crossover between Batman and Elmer Fudd from Looney Tunes. And, wouldn’t you know it, Batman/Elmer Fudd Special #1 might not quite reach the level of Alan Moore’s finest work, but it’s, shockingly, damn near close.

DC, which is owned by Warner Bros., spent June mashing together its iconic superheroes and some of the most famous cartoons of all time. Other crossovers include Wonder Woman/Tazmanian Devil and Martian Manhunter/Marvin the Martian. It’s a looney idea, but King and his illustrator, Lee Weeks, decided to make it work.

“When Dan [DiDio] called me with the idea, I thought he was joking at first. It didn’t help that he was having a hard time finishing his sentence without laughing,” Weeks says, adding that he hesitated to accept the illustration gig before realizing that the idea was cool in a “David Lynch sort of way.”

From there, it was just a matter of figuring out how to bring everyone’s favorite dimwitted hunter to the gritty streets of Gotham.

“I kind of wanted to make a parody of these sort of ‘80s stories, these Batman stories I grew up on, where they took these cartoonish villains and made them into these horrible, disgusting serial killers,” King says. When he ran the dark and edgy idea by Weeks, though, he was shot down.

“Lee came up with the idea of, ‘What if we did it as a noir?’ And I’m a huge classic movies fan, so I stole his idea and tried to do that,” King jokes. So, instead of a grotesque, R-rated killer, the Elmer Fudd of the comics is a hard, heartbroken man. Without giving too much away, Fudd’s out to avenge the murder of a dame he loved, and when Bugs Bunny tells him that Bruce Wayne is the rightful target of his wrath, he goes hunting. (Bugs is drawn as a buck-tooth human, as are all of the various Looney Tunes animals who occupy Porky’s dingy Gotham dive bar.)

Finding a source of conflict between the Dark Knight and Elmer Fudd was easy, since Batman is strictly anti-gun, while Elmer is one of pop culture’s most famous — if ineffective — gun owners. But, King says the harder part was finding something that these two very different characters could bond over, since there needed to be a connection to give the story some earnest pathos. He eventually came upon it.

“It was sort of this longing for love that they both have, which is true to the cartoon and true to Batman,” he says.

Given that the man who came up with the idea for the Batman/Elmer Fudd Special couldn’t stop laughing, it’s obviously a joke. But, the art and serious plot (albeit one that’s not without its share of levity) keep the joke from getting old. It’s somewhat reminiscent of the late Adam West’s style: Batman (and Elmer) are funny because they’re not winking at the audience. They’re playing it straight.

Weeks echoes this sentiment, saying that the whole idea for the comic really clicked for him when he realized, “Oh! You want the art to be the straight man.”

The final art nails the tone, bringing to mind Batman: Year One with a bit of a Tex Avery influence.

“I’ve worked on a lot of comics now over the past four or five years, and this is one of, if not the most beautiful, comics I’ve ever worked on,” King says, praising his partner. “Which is so very bizarre to do on an Elmer Fudd/Batman crossover.”

Batman/Elmer Fudd Special #1 tells an inherently goofy story in a serious way, but there’s still lots of fun to be had. Both the script and art are peppered with Easter eggs and references to Looney Tunes history (Pay special attention to the sound effects, which are a looney spin on onomatopoeia.) Week’s favorite hidden secret, though, is a subtle reference to a Batman character who doesn’t make a formal appearance.

“There’s a scene where Batman and Elmer are side-by-side for the first time in a posture ready to take on some baddies,” Weeks explains. “And, I asked for the colors of Elmer, for his trench coat and hat, to have kind of a yellowish tinge. His work shirt is a red plaid and his work pants are a deep green. So, it’s like he was Boy Wonder for a day.”

Batman/Elmer Fudd Special #1, a comic where Bugs Bunny’s foil can pass for Robin, comes out on June 28.

More like this
Entertainment
5.20.2022 11:00 AM
Why Moon Knight’s head writer refused to “go toe to toe” with Batman
By Eric Francisco
Entertainment
5.10.2022 12:15 PM
47 years ago, Marvel turned its biggest failure into an unstoppable juggernaut
By Richard Newby
Gaming
5.19.2022 4:00 PM
MultiVersus could be the first Smash clone to truly challenge the throne
By Eric Francisco
Related Tags
Share: