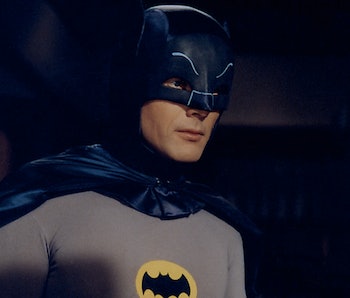 Superheroes may never truly die, but as Adam West’s passing reminds us, their alter-egos are strictly mortal. In celebration of West’s iconic portrayal of Batman, it’s nice to remember that the kitschiest Caped Crusader probably took the role more seriously than anyone else. West’s Batman might be remembered as being the silliest version of the character, but he achieved that effect by playing it straight.

When Yvonne Craig took the role of Batgirl on ABC’s Batman in 1967, West told the young actress the way the Bat-magic worked: “Play each scene like it’s the last scene of your life.” Prior to being cast as Bruce Wayne/Batman, West’s career consisted of guest roles on dramas like The Rifleman, Perry Mason, and, notably, The Outer Limits, the Black Mirror of the ‘60s. Through it all, West’s characters were deadly serious, a quality he carried over to Batman, too. For the casual fan, this might seem like a contradiction. West’s 1966 Batman is remembered for the deadpan laughs, not the pathos. So what gives? How was West the funniest Batman and the most serious Batman at the same time?

The easy answer is that Adam West was a master of camp. In her famous essay “Notes on ‘Camp,’” critic Susan Sontag defines camp as “love of the unnatural, of artifice and exaggeration.” When Adam West played Batman, he pulled his artifice over his head, literally. His Bat-mask allowed him to become the character. According to the Hollywood Reporter, West said that in order to create any kind of comedy “one had to never think it was funny. You just had to pull on that cowl and believe that no one would recognize you.”

In the 1966 Batman feature film, the funniest bit (after Batman beating up a fake shark) is easily when West tries in vain to dispose of a Looney Tunes-style bomb. West’s physical comedy here feels like you’re watching a Buster Keaton movie, or even Charlie Chaplin. But when it comes to delivering the essential one-liner in this scene, West encapsulates why his Batman had to be serious in order to be funny. “Some days you just can’t get rid of a bomb,” he says, and there’s not a single wink at the camera. Adam West wasn’t in on the joke of being a campy Batman, he was immersed in it. According to Sontag, “to talk about camp is to betray it.”

The only “goofy” Batman post West was George Clooney, in 1997’s Batman and Robin, a movie whose primary flaw is simply trying very hard to be funny and failing. West’s Batman never tried to be funny, which is why he succeeded in being hilarious. Because of the overt (and possibly misguided) earnestness of almost every single Batman since West, no one actor has captured the blend of humor and heroism he pulled off so splendidly. Whether he was lecturing Robin about being an upstanding citizen, extolling the merits of his thermal-Bat underwear, or challenging the Joker to a surfing competition, Adam West gave the performance of his life every single time. He wasn’t the Batman anyone deserved, but because of his mastery of camp and commitment to his craft, he will forever be, the Batman everyone needs.

More like this
Entertainment
2 hours ago
The Batman: Part II — Everything we know about the Robert Pattinson sequel
By Gabrielle Bondi
Entertainment
2 hours ago
DC’s New Secret Weapon is Director-Driven "Elseworlds" Movies
By Eric Francisco
Culture
Jan. 31, 2023
A Delightful New Hulu Show Finally Figured Out the Superhero Sitcom
By Dais Johnston
LEARN SOMETHING NEW EVERY DAY.
Related Tags
Share: