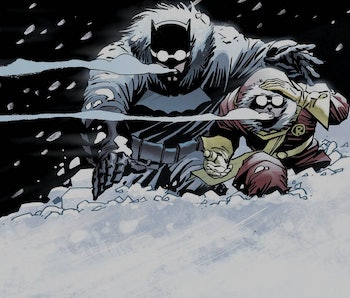 Frank Miller invented Batman as we now know him: the grizzled, dark protector of Gotham City, impatient with his horde of sidekicks, and drawn to the Joker in a way he can’t explain. Before Miller focused on Batman’s rawest emotions in 1986, the superhero from Gotham was still goofy. He couldn’t stand alone, and was often paired with a brightly-colored Robin character. Pre-Miller Batman was laughable, just a guy in a bat suit running across a pier with a bomb over his head.

Reading Frank Miller’s recent return to Gotham is a personal and powerful experience for me. I’m a lifelong comic book nut, but my very first foray into the medium was sneaking a look at my father’s collection of Frank Miller’s Dark Knight comics. Here, I thought, was a Joker worth fearing: not just a raving lunatic, but a sexual predator who’d dress up Selina Kyle as Wonder Woman and rape her. At the time, Miller’s use of transphobia and his labeling the Joker’s feminine performance as “perverse” went right over my head.

Miller’s Batman infuriated many fans, and continues to piss off readers who want their superheroes cleaner and easier to stand behind. I can see through Miller’s eyes the image of a Batman as he might exist in our world: hypocritical, cruel, impenetrable, and selfish. Fans of stern noir protagonists might see Miller’s Batman as some last stronghold of classic masculinity. As a kid, I saw him as a hero to whom my dad, a lifelong soldier, could feel connected.

I didn’t understand, as a child, why my conservative father felt so connected to Frank Miller’s noir vision of Gotham, where men were grim heroes and women were dames and vessels, but I could hear the undeniable power of Miller’s voice. The good news for fans is that his voice is still just as resonant in The Dark Knight III: The Master Race. Issue #1 was released back in November, and Issue #2 followed after a month. Book Three flashes its bat signal on February 24.

Notably, the first two books in Master Race are almost entirely devoid of Batman. He speaks to Carrie Kelly — his former Robin — while lying on his death bed, confessing that — by nature of his lifestyle — he always feared he’d die alone. In the last panel of Master Race #2 — spoiler alert) — we realize with a jolt that Bruce Wayne is still alive. His image catches him midway through turning to the viewer, and he’s bent and broken. Miller’s Batman, after all, was steeped in failure. It seemed no matter what Batman pulled off that he was always two steps behind the evil in his city, which made Miller’s comics feel dire and full of dread. Miller’s Gotham was a world steeped in guilt and full of dark corners.

Miller’s Joker led followers who spoke in voices that now sound suspiciously like a white man trying to “speak jive,” but they were marked with a cyberpunk aesthetic that was ahead of its time. Perhaps in reference to that, The Master Race opens with a text conversation between goons, as they argue about whether one of them has actually “Cn the Bat” (“seen Batman”).

“Miller made Batman the old man with the short temper and no patience for those who couldn’t keep up with him. He was the solitary, bitter figure, alarmed at the way the world had changed so fast and without any way for him to make it slow down, much less come to a stop.”

Whether or not contemporary readers are comfortable with Frank Miller’s version of Batman is irrelevant, to a degree. He also foresaw the conflict we’re all about to witness in Batman v Superman, though his fight wasn’t between handsome heroes, but instead between two titans, crippled from having carried our world on their shoulders for decades.

The most memorable thing Frank Miller allowed Batman to do was decay, both morally and logically. His new books look very strange on the shelf next to progressive and successful contemporary comics like Ms. Marvel, but his artistic impact on Gotham still matters. Frank Miller gave us a Batman who was difficult to follow, and hard to look at for too long. The Master Race is a return to that uncomfortable feeling, which is all we could really ask of it.

More like this
Entertainment
Jan. 12, 2023
The Batman 2 will be set up by HBO's The Penguin, director reveals
By Eric Francisco
Culture
Jan. 23, 2023
5 years ago, DC released the best Batman movie you haven't seen
By Laura Kelly
Entertainment
Jan. 13, 2023
Foundation Season 2 could fix the worst thing about the Isaac Asimov books
By Ryan Britt
LEARN SOMETHING NEW EVERY DAY.
Share: