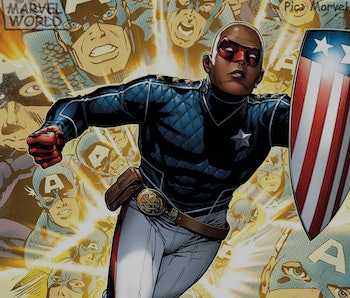 When Sam Wilson and Bucky Barnes return to our screens later this year, they won't be the only Avengers running around in the Marvel Cinematic Universe. A new casting leak for the Disney+ series The Falcon and the Winter Soldier suggests that the character Elijah "Eli" Bradley (the second person to don the superhero name Patriot in the comics) is on his way to the MCU.

Not only that, but Eli's potential arrival suggests that the Marvel Cinematic Universe is setting up the formation of the Young Avengers — and a possible connection to the now-finished Marvel television series, Agents of S.H.I.E.L.D.

Here's what you need to know about Elijah Bradley, his superhero identity, and how it connects to the MCU's past and future...

What Happened? — On January 3, Murphy's Multiverse reported that 18-year-old actor Elijah Richardson has been cast for The Falcon and the Winter Soldier as Eli Bradley, in two episodes of the upcoming Disney+ series.

Murphy's Multiverse's source is primarily IMDb, which doesn't guarantee the news to be true, but has nonetheless generated interest in Eli Bradley for fans of the MCU. So, who is Elijah Bradley, anyway?

Who is Elijah Bradley?

In the pages of Marvel's comics, Elijah "Eli" Bradley is the second individual to don the superhero name "Patriot," after Jeffrey Mace. (More on him later.) Debuting in 2005 in Young Avengers #1, Eli is the grandson of Isaiah Bradley, one of many Black American test subjects of a second Super Soldier serum after Steve Rogers/Captain America was frozen in ice.

But Eli didn't gain powers from his grandfather. Instead, he got them from Mutant Growth Hormone, an illegal street drug that creates temporary mutant powers. Later, Eli undergoes a successful blood transfusion with his grandfather, which permanently gifts him the powers of the Super Soldier serum.

As Patriot, Eli is a founding member of the Young Avengers, formed alongside Hawkeye (Kate Bishop), Stature (Cassie Lang), and Miss America (America Chavez), characters who happen to also be on their way to the Marvel Cinematic Universe in shows like Hawkeye and movies like Doctor Strange in the Multiverse of Madness.

Eli leaves the Young Avengers on unceremonious terms. He disappears from the spotlight and is succeeded by a new Patriot, Rayshaun Lucas, a teenage activist and sidekick to Sam Wilson.

While the story of the Falcon and the Winter Soldier limited series may not have room for Eli Bradley to officially become the Patriot (there are enough star-and-striped superheroes in the show as is), the widespread introduction of characters like Kate Bishop, America Chavez, and a recast Cassie Lang suggests the Young Avengers are almost definitely coming to the MCU, which means it's only a matter of time before Eli suits up as a superhero.

But if Eli does become Patriot in Phase Four, the MCU will have to address the first person to carry the name: Jeffrey Mace. In Season 4 of the Marvel/ABC television series, actor Jason O'Mara played Jeffrey Mace, who took over control of S.H.I.E.L.D. from Phil Coulson.

During the course of the season, Mace suited up as "Patriot," to act as a face for the organization in an effort to rehabilitate the company's public image. (Remember: This was the aftermath of Captain America: The Winter Soldier and Civil War, which saw S.H.I.E.L.D. disgraced and Captain America a "war criminal.") Jeffrey Mace sacrifices himself in the episode "No Regrets."

Should Eli suit up as the Patriot, it will be fascinating to see if the MCU acknowledges Jeffrey Mace's public use of the name "Patriot," or if the canon of Agents of S.H.I.E.L.D. is forgotten entirely.

The Inverse Analysis — Given the limited series format, it's not likely that Eli will become Patriot in The Falcon and the Winter Soldier — if he's in the show at all. (Let's assume for now he is.) But like a lot of superhero media, it's inevitable the show will plant the seeds for Eli to become Patriot for the next time we see him, which is all but guaranteed to be a Young Avengers film or show on Disney+.

When that happens, it will be fascinating to know if the mostly-discarded continuity of Agents of S.H.I.E.L.D., the first MCU television series, will finally have a real place in the overall tapestry of the Marvel Cinematic Universe.

The Falcon and the Winter Soldier will stream on Disney+ on March 19, 2021.